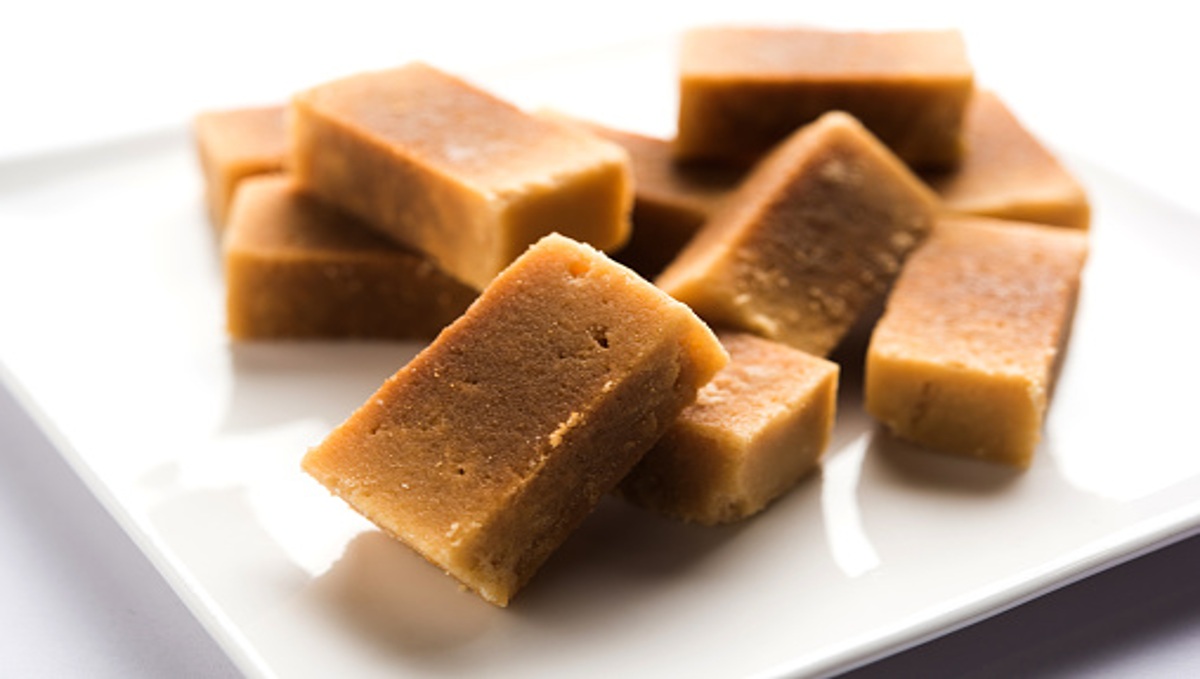 When thinking of Indian cuisine, the first thing we imagine is a super spicy dish with rice and vegetables. Still, sweet treats have been a tradition within this culture for centuries, especially in the Southern part of India. Here you have the recipe for Mysore Pak, the fluffy must-have South Indian dessert from the state of Karnataka!

Karnataka is the largest state in South India, of which the capital is the amazing city of Bengaluru. Mysore Pak is definitely the signature of this place. You can find it everywhere, at every corner of the streets. It really is a must-have dessert. It can never be missed out on the menu for special occasions and cultural celebrations. According to the tradition, its history dates back to the 18th century. It was first cooked at the Mysore Palace, under the reign of Mummadi Krishnaraja Wodeyar.

The head chef of the royal kitchens, one day, simply made a concoction of besan, ghee and sugar. He wanted a golden dessert which would recall to the magnificent palace. The king liked the sweet so much he decided to make Mysore Pak the royal dessert!

Since then, this dessert has never disappointed anyone! Back in time, though, it looked different. Today, indeed, it is solid and cut in cubes, but it had the shape of a smooth cake. They changed the composition of it and its form, so it would be easier to sell!

But, who was the head chef, the real inventor of Mysore Pak? Here you have the story of Kaakasura Madappa and his family!

So, Kaakasura Madappa was the genius who “invented” the Mysore Pak by accident! The king liked his dessert so much, he asked him to open a small shop close to the palace. The king wanted the common people to taste the delicious dessert too! What a sweet thought! Since then, the Madappa family has been running the business. Nowadays, Mysore Pak is sold everywhere in South India, especially in Karnataka, but you can find the original one in just one place! Close to the Nevaraja Market in Mysore, there is small sweet stall called Guru Sweets. It is the authentic shop from the 18th century, still open and making Mysore Pak!

Dussehra is a Hindu festival which takes place every year at the end of Navaratri. Many artists and musicians gather to celebrate the victory of the goddess Durga over the buffalo demon Mahishasura. By defeating the demon, she got to restore the dharma, the main concept at the basis of Hinduism. It represents many things, such as “rightness”, “civil and religious duties”, “moral”, “universal rules”. It is something not that different from what the ancient Greeks called logos, the world order. As Romans used to say: “est modus in rebus”. This shows you how important this celebration is and it is easy to understand why such a splendid dessert is a must-have!

But now, let’s have a look at the recipe!

Here you have the recipe for the best Mysore Pak, even if the writer believes that THE best one is actually the Mysore Pak made in Karnataka! The ingredients are for 12 servings.

First, you want to take a pan and put 3 cups of ghee in it. Heat it over medium heat. When it is hot enough, add 1 cup of gram flour (besan) and keep roasting for 5 minutes. You know it is ready when the raw smell is gone. Roast it well!

Now, take another pan and add 2 cups of sugar. Pour water in it and boil it until it has the consistency of string. Pay attention: too much heat will burn it. Once the syrup is ready, pour in the same pan the gram flour mixture. Stir it until it is properly mixed. When you see the mixture rising because of the heat, add 1 pinch of baking soda.

Then, you want to pour it into a greased plate. Let it cool. Before it gets too hard, cut it in pieces and let it cool again.

Your Mysore Pak is finally ready! Invite your friends and enjoy the best Indian sweet treat ever!

If you are interested into other religion-related dishes, you might want to have a look at this article about Challah: the Jewish sanctified bread!