Torta al testo: recipe for the flatbread from Perugia, Italy 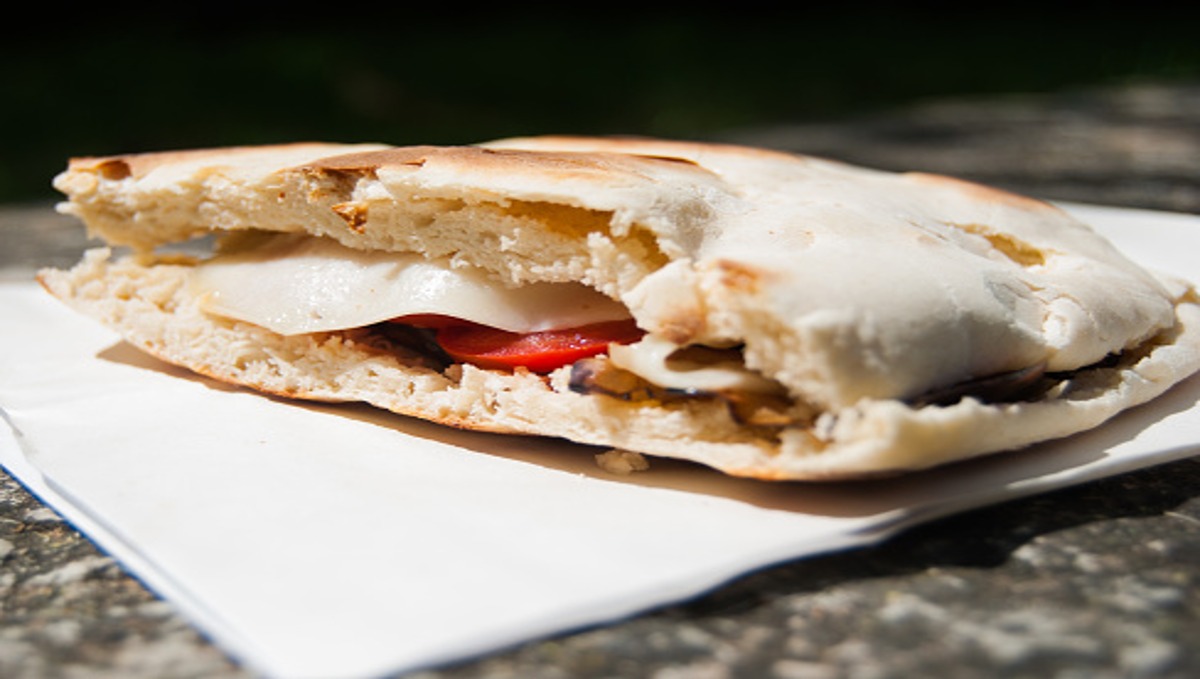 “Crescia” is the traditional name for the well-known Torta al testo from Perugia, chief town in Umbria, Italy. It is the unleavened alternative to the unsalted bread baked in the region. Here you have the recipe for the original Torta al testo! Also, there is a small town in France, Pérouges, close to Lyon, where they make its “sweet version”, La Galette!
Let’s discover their history!

You do not need to be a linguistic in order to note the similarity between the names of the two cities. Perugia and Pérouges to really sound alike! And they even look alike! They both are, indeed, two medieval cities with some Roman constructions. Moreover, they also have a similar dish: the salty Torta al testo from Perugia and the Sweet Galette from Pérouges. Then, the question is: are they somehow related? If so, how? Since when?

According to the sources, they are not. Actually, we do not have any sources which could testify any sort of relation between them. For that, we have to sadly assume there is no historical evidence to support this hypothesis.

Nonetheless, in Pérouges there is a legend which states that the city has been founded by a colony of Gauls. There were going back home from Italy. During their journey they passed by Perugia. The magnificence and the beauty of the town hit them so deeply they decided to found a village in its honor. Unfortunately, there are no archaeological sources to support this thesis, yet, it still is a very charming story! (If you are interested into this legend, you want to check this video out!).

La Galette is the exact reason why Pérouges is famous all over the world! This sweet pastry is literally the signature of the French town. It comes from the traditional recipe library of the French region called Bresse. The bakers hide a secret: instead of using the usual mixture for bread, they make la Galette out of the pastry used for croissants! You have to keep baking it until it has the consistence of a brioche, then you want to put it in the highest part f the oven. In that way, the upper part of la Galette gets crunchy and caramelized!

If you want to taste the real and traditional Galette, you have to go to the Hostellerie Du Vieux Pérouges. The shop is the oldest in the town and their speciality is a real must-have if you are planning to visit the city.

As you can read, La Galette is way more than just “the French sweet version of Torta al testo”, still they really look alike.

Even the traditions of the Torta al testo from Perugia are very old. It has represented the salty alternative to the unsalted bread, typical of Umbria. It is extremely easy to make and it can be served with cuts and cheese, but you can stuff it with Nutella and cream too! The original Torta al testo, though, is filled with grilled sausages and Herb Campagnola, which is a little bit bitter.

The name of this meal is given by the special hob people use: it is a disc about 3 cm thick. Its name is, indeed, testo, from the Latin word “testum”. This term indicated the clay tile the ancient Romans used to cook flatbread!

But now we have discovered the history of the famous Torta al testo, let’s find out its recipe!

Here you have the only and one original recipe for the traditional Torta al Testo from Perugia. Follow the steps and the result will be amazing!

First, you want to take a big bowl. Pour in it 500 gr of “0” flour and add a teaspoon of bicarbonate of soda. Mix it up. Make a hole in the centre with your hands and add the water, oil and salt. Keep kneading the mixture until it is soft and smooth.

Now, transfer the dough on a top and keep kneading it for 5-10 minutes. All the liquids need to be perfectly absorbed, otherwise the mixture will stick on the pan. Shape it as a ball an cover it with transparent film. Leave the dough outside of the fridge for 30 minutes.

Then you want to divide the Torta in 3 parts. Help yourself with a knife. Add some flour on the top and roll out each piece with a rolling pin. The thickness should be of 1.5 cm, but it really depends on how you like it. Now, take a fork and start to make some holes on the surface. This trick allows you to well cook the flatbread even in the inside.

Take your Testo, if you have one, or use a normal pan and warm it up. Let the dough cook for 3 minutes on each side.

Now, choose your favorite cuts and cheese or take some sausages and open the Torta in half. Stuff it and the dinner is served!