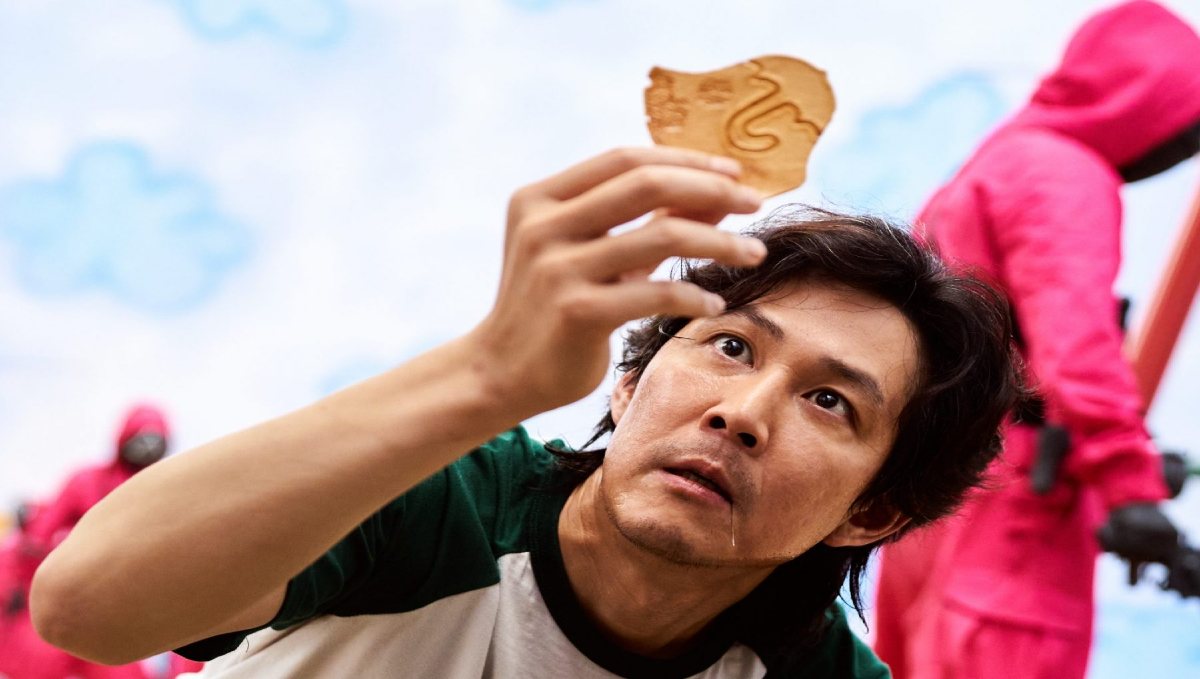 Squid Game is Korean show that stole the audience’s hearts and that is now ruling the Netflix top 10. Among all the challenges the players have to win, the most famous one refers to Dalgona, a traditional Korean street candy. Here you have the recipe to male the perfect treat but first, let’s discover something about Squid Game.

Squid Game is the South-Korean TV serie that has took over the small screen: it might shortly become the most watched show on Netflix, defeating even Bridgerton and La casa de papel, in English “Money Heist”.

What is this incredible story about? Like every good story, the plot is pretty easy: there is a man, a poor, abandoned man, Seong Gi-hun, and there’s a game, The Squid game, the solution to all of his problems. One night, in the darkness of the subway, in Seoul, the main character is approached by a strange man. He is offering something no poor man would ever refuse: a huge amount of money, the prize of the game.

The very next day, Seong Gi-hun wakes up in a bunker with other 456 players. These people seem to have nothing in common but just one thing: they have nothing to lose. None of them. Not money, nor family. They are desperate enough to follow a stranger in the dark.

The challenges, at the beginning, look very banal, harmless. They are just traditional street games for children. What could go wrong? At the end, it is just a game!

Well, it is, indeed, a game, yet a mortal one. The challenges are way more than this: the players are rats in a trap.

Nonetheless, as the director Hwang Dong-hyuk declared, the show is much more than this: it is a direct and polemic attack to the disparities between poor and rich people in Korea. Let’g get deeper into that!

Squid Game and the “Dalgona” episode

Is a game still a game if life is at stake? Apparently, yes.

As the Romans used to say, people need “Panem et Circenses”, food and entertainment. If you look at Suzanne Collins’ trilogy, “Hunger games”, everything gets clear. The audience craves for challenges and games. Sometimes, they even need to see some blood on the screen, on the stage.

Sports, for that reason, are extremely popular and top players are athletes eran a tremendous amount of money. They are loved by their fans, they become idols! They fight for their team and for those who cannot be on the field.

Squid Game, then, is just that: a game, a match. And people watch. They love watching poor desperate players, risking their own existences for a prize which WILL change their lives.

It is the kind of adrenaline that satisfies the brutal and primitive need of blood we all have. In these specific cases, the society, the state allows violence. And this violence is, in a certain way, controlled because, as we keep repeating, it is just a game.

During the third episode, we see the players fighting against each other over this strange challenge: they have to cut a form engraved in a sweet, the Dalgona. This candy is made of sugar, so it is incredibly difficult not to break it while cutting the image.

Therefore, in Squid Game the Dalgona, really is the “Trick or Treat” of the worst sort.

Still, here you have the recipe to prepare the sweetest Korean candy. Just, be sure you are having it with friends and with your enemies!

Recipe for the best Dalgona from Squid Game

The Dalgona is probably one of the most famous Korean street candy. It is a thin disc of cooled caramel, nothing else. Yet, it is absolutely delicious! You can find it at every corner among the streets in Korea. Here you have the steps to male it!

First, you want to take a small bowl.

Add the two tablespoons of sugar and let it warm up over a low flame. Keep stirring to prevent the sugar from sticking to the bottom. Once the sugar is well melted and amber in colour, add a pinch of bicarbonate of soda. Now, lay out a sheet of baking paper on the table. Pour the caramel over it and press it down with the bottom of the pan so that the disc is thin.

Then, take your favourite biscuit cutters and press them over the discs, without breaking them. Once cooled, invite your closest friends and start the challenge. Who will manage not to break them?

If you are interested in other traditional street candies, you want to check this article out about Mysore Pak, the regal Indian sweet!