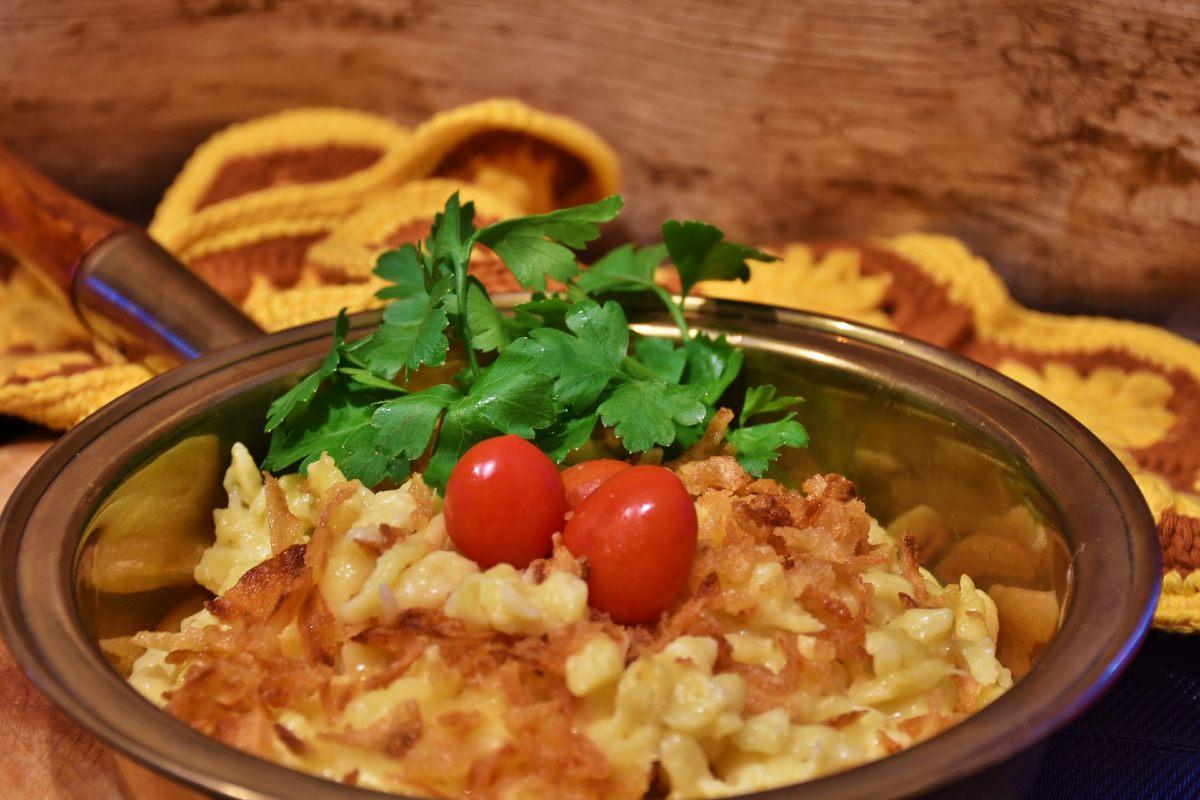 Have you heard of German Kaesespaetzle? No? Well you should, this traditional South-German cheese dish will make you forget about the American equivalen of Mac’n’Cheese! Find out more about the history and the making of this typical German food!

Kaesespaetzle is a typical southern german dish that you will find in the Regions of Swabia, Baden and the Allgäu. It contains of freshly made egg pasta, melted cheese and is mostly topped of with fried onions.

Of course all those regions claim to be the inventors of this cheesy goodness. But actually there are some, widely considered confirmed facts of its deriving.

The History of Käesespätzle. Or Why is this Cheesy Dish Called like a Bird?

German Kaesespaetzle are considered having been part of Swabian Cuisine for at least the last three centuries. Its name was firstly officially documented in 1725, but there are also some medieval paintings that show the making of those typical noodles.

Spaetzle, in the beginning made without cheese, had been considered nourishing, versatile in their combination with other foods and easy to make. Also the wheat which had mostly been used to make Spaetzle, spelt, is considered undemanding and easy to grow. Spelt also contains lots of sticky protein so that in times of need you would not even have to add eggs. This is why they quickly became part of the daily diet of the poorer – and unfortunately major – part of the Swabian population.
Since the beginning of the Industralisation and by the Swabians gaining more and more wealth Spaetzle turned from being a dish of the poor to a culinary specialitiy traditionally served on holidays.

The word ‘Spaetzle’ actually is Swabian dialect and means ‘little sparrow’. This might seem a bit off putting as Spaetzle itself are a pretty good example of a vegeterian, German dish. There exist different theories about the liguistic deriving of this food. One links the process of making Spatzle to the naming: Appearently women used to hold the dough like a little bird in their hands, cut off little pieces and put them in boiling water and by doing so, formed little sparrows – the Spaetzle.
Another explanation – that does not have anything to do with birds – connects ‘Spaetzle’ with the Italian wird ‘spezzato’. Spezzato means broken, Spatzle would be the Germanized version of it.

“Not Without my Spaetzle!” – When the Swabians took their Spaetzle-Tools to Fight off the Russians

As Spatzle have been part of Southern German Cuisine for appearantly hundreds of years of course lots of different myths and histories are linked to it. One ordinary story took place in 1812. One German troup of the Regions of Swabia, Würtemberg, which had been allies with French commander Napoleon, went to help fight at the Russian front. But of course they would need their traditional dish to help them maintain their physical powers. This is why they brought along the typical tool to prepare Spatzle – the ‘Spaetzlebrett’.

As it nowadays is a very common food in those parts of Germany Spaetzle are actually served in every possible way. It can be eaten as a side dish with different kinds of meat like German roasts or roulades or even with Schnitzel. But actually Spatzle deserve to be the protagonist on your table. This is why this article features the most delicious way of serving Spaetzle: Kaesespaetzle, the German equivalent of Mac’n’Cheese!
The delicious German dish combines actually all the guarantors of a good meal: Wheat, cheese and onions.

So: How to Prepare this Cheesy Goodness?

The basic recipe to prepare the Spaetzle dough is actually pretty simple: flour (traditionally spelt), eggs, salt and water. The traditionally added cheese to this dish is Emmentaler or German Alpine Cheese, so you can look for one of those to get the true Kaesespaetzle experience.

Serving 3 to 4 you will need following ingredients:

Preheat the oven to 450 F (230 C). Fill a large pot with water, add some vegetable oil and some salt and bring it to boil.

To prepare the dough add flour, eggs, a pinch of salt and the water to a large boil and beat the dough until smooth. The consitency should be a thicky fluid, if needed add some more water.

Next you will cook the dough in portions: First wet the board with some of the hot water so the Spaetzle will not stick to it. Then put some of the dough flatly on a cutting board and then scrape small portions off it by using the blunt side of a knife. This video (starting at 1:25 minutes) shows you how to use this technique.
Once the Spatzle float to the top, drain. This normally only takes a few minutes so be cautious to not overcook them.

Pro-Tipp: You can also cook a bigger portion of the Spaetzle and keep the rest of it in the freezer to safe the cooking step the next time you prepare Kaesespatzle!

Next you butter a 20×30 cm (or a little smaller) casserole dish. Layer 1/3 of the spaetzle in the bottom of the dish, followed by 1/3 of the cheese, repeat this two more times spraying each layer with a bit of salt.
Put the dish into the oven and bake for 10 minutes.
While the Kaesespaetzle are baking, put some oil into a frying pan, wait until hot and then add the cut onions. Leave them on medium heat until you like the degree of softness (or even brownness). Add the sugar and wait for it to melt and caramelize the onions. Once done immediately remove from the pan and put it on top of your dish of Kaesespaetzle.

After this there is only one task to be finished: ENJOY!

Feel like more traditional noodle dishes? Check out this Spaghetti with Meatballs Recipe