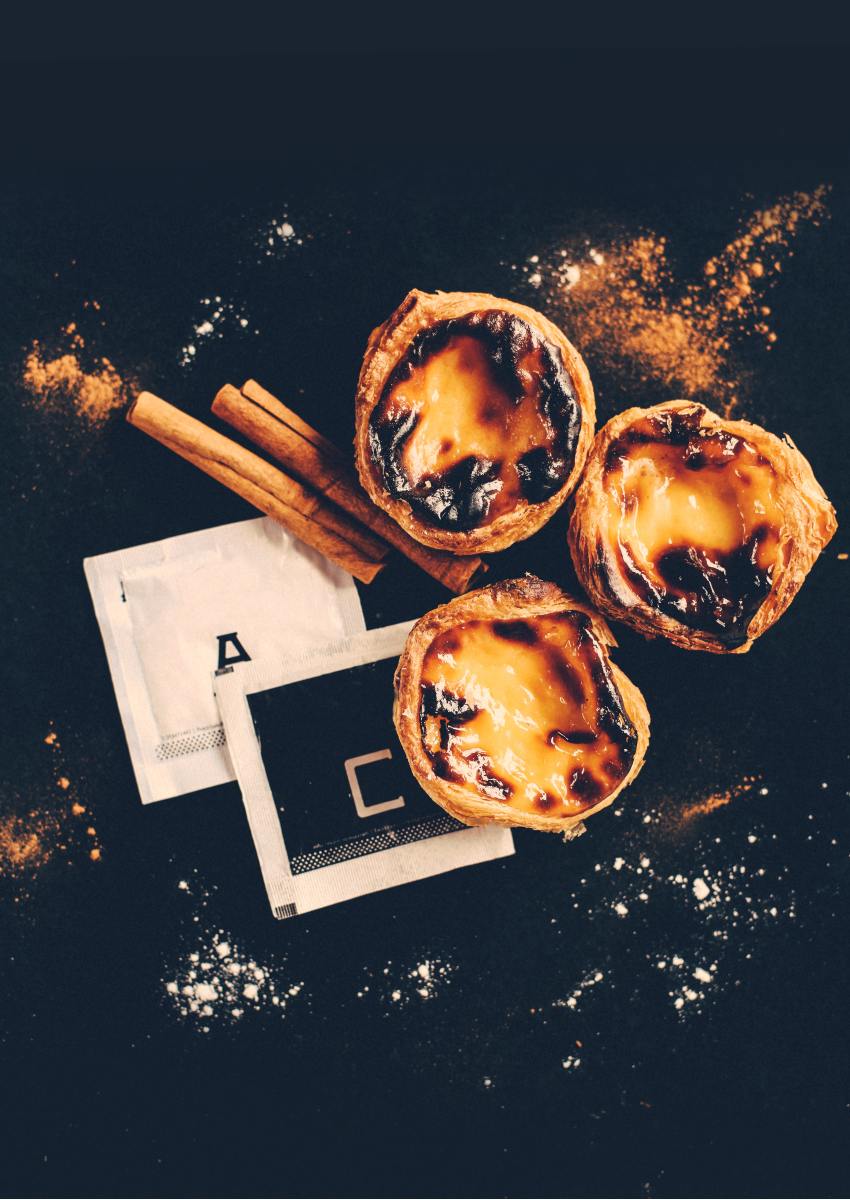 It might be no exaggeration naming pastel de nata as the number one portuguese signature treat. Visiting the Portugal one can not avoid stumbling over this exquiste tart in every bakery or cafe you pass by. If you are curious about some historical facts of pastel de nata you clicked the right article! In this post you will find out everything about the story behind the sugary treat. This article furthermore provides a foolproof recipe to prepare the Portuguese specialty pastéis de nata in your very own kitchen!

So… How To Describe Pastel de Nata?

Pastéis de nata – pastéis is the plural form of pastel – are typical Portuguese pastries that can be described as a kind of egg tart. They might actually remind you a bit it of little nests made of crispy pastry and filled with a soft, sweet, custardy filling. The top of the custard is caramelized and most people spread cinnamon or icing sugar on top before eating it.

For Portuguese people it is very common to take a pastel along with an espresso or capucchino. The sugary sweetness of the tart goes very well with the flavours of coffee – a match made in heaven! In Portugal you might even see some people using their teaspoons to eat up the creamy filling of their pastéis.

This typical Portuguese treat sometimes is also called ‘pastel de Belém’. Do not get confused about that! There is actually no difference between pastéis de nata and pastéis de Belém. The latter one simply refers to the most famous place to eat those creamy egg tarts: The district of Santa Maria de Belém in Lisbon. There you will also find the bakery Fábrica de Pastéis de Belém, the original and most famous place to eat the pastéis. In the end the name ‘Pastéis de Belém’ simply stresses the connection to the district of Belém.

What Do Monks Have to Do With Portugals Sweetest Sin?

This mentioned connection of those creamy treats actually goes way back in time. Belém is considered to be the origin of the popular treat. Legend has it the monks from the Jerónimos monastery in Belém invented – or at least perfected – those Portuguese egg tarts.

The said monastery is nowadays a major tourist hotspot and a UNESCO World Heritage Site thus mostly crowded by masses of tourists. About 300 years ago though, it was a busy civil parish. Because of the lack of modern laudnry detergent the monks used egg whites to starch clothing and fabrics. Of course the eggyolk came along as kind of a by-product they could not use for starching.

Of course the stereotype of the big-bellied and food-loving monk does not apply on all of them. But without deepening prejudices about men in cloth I guess we can all agree on the extraordinary creativity monks showed in their kitchens. So, to avoid food waste, the monks experimented about how to make the best of the leftover eggyolks. The result is what we now know as our favourite Portuguese treat: pastel de nata or rather, pastel de Belém.

In 1820, after the Liberal Revolution, like many other religious institutions, the Belém monastery was faced with financial problems. The funding of monasteries was shut down and the monks had to think of new ways of making a living. So the monks started selling their pastéis to the public and finally shared the delicious pastries with the world. After some years the monastery nevertheless went bankrupt and was closed. The monks selled their secret recipe of the pastéis de Belém to a local sugar refinery – which later became the Fábrica de Pastéis de Belém!

After handing out all those plain informations let’s head to the practical part:

As the above named ‘nest’ of the Pastel is made of puff pastry, the easiest and laziest way would be to simply buy that ingredient and only make the filling. This is actually a good option if you are short in time but really feel like having some pastel-like treat. But it would only be pastel like. Of course a self made pastry puff will get you closer to the real pastel experience. Also making this portuguese treat is definetely not rocket science and this recipe of pastel de nata provides you with all the knowledge you need. Just be aware that puff pastry has chill a few hours, preferably even overnight, in the fridge.

For 12 delicious pastels you will need following ingredients:

For the puff pastry:

now let’s get to the proceeding:

Instead of writing down a probaby never ending instruction of how to make puff pastry, I simply advise you to watch the following video. Simply use the ingredients named above. Also keep in mind to give it plenty time to chill in the fridge.

To make the filling and the pastels:

Preheat the oven to 260 C or as hot it can get. Then mix 60 ml of the milk and 50 g of flour in a bowl, then set it aside. For the syrup add water, sugar and the cinamon stick to a heavy-bottomed saucepan. Heat the mixture over low heat until the temperature reaches 100C. It’s recommendable to use a digital thermometer at this step to check the temperature. Do not stir but allow the syrup to dissolve on its own.

Meanwhile in another pan boil the remaining milk and pour it over the milk and flour mixture while constantly stirring and add the vanilla.

Once the syrup reaches 100C temperature, take out the cinnamon stick with a pair of thongs. Next pour it into the milk and flour mixture while constantly whisking. Keep whisking for about 10-15 minutes so the mixture can cool down a bit. Add the egg yolks when the mixture is still warm but not hot.

Sieve the custard into a jug. Like this it will be easier to measure out when pouring it into pastry shells. Cover the jug with a cling film and set aside for later.

Cut the log from the fridge into 12 equal pieces, place each of them i a 12-hole, regular-sized and lightly greased cupcake pan. Leave it a bit so the butter can melt.

Next moisten your thumbs with cold water. Then press on the center of the pastry pushing it down and stretching it a bit. When the bottom of the hole is covered, draw the dough up its sides. Take care not to overstretch it.

Now comes the final step: Pour the custard in each pastry shell so it’s 3/4 full. Put them into the preheated oven and bake for eight to nine minutes. Voilà!

Eat the delicious pastels warm and sprinkled with icing sugar and/ or cinnamon.

This recipe was taken from tasteatlas.

If you are hungry for even more sweet and traditional specialties check out our Blogpost about the south-Indian desert Mysore Pak!