Halloween in Ireland – The Story and Recipe of Colcannon 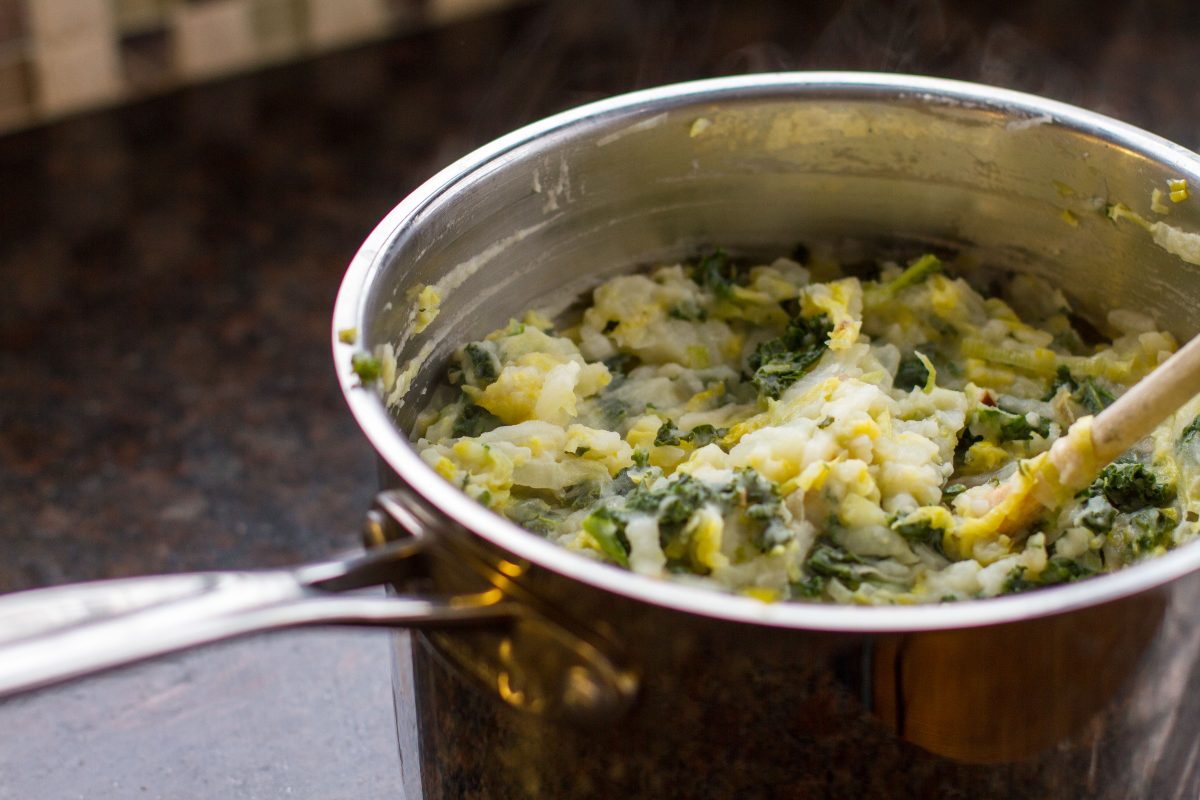 Colcannon – Or Next Level Mashed Potatoes from Ireland!

Potatoes and Europeans, a lovestory. In Ireland, just like many other countries all around the globe, potatoes soon became part of their everyday diet. Colcannon though, is considered a dish for special occasions and was and still is traditionally served on Halloween.

Colcannon is actually some kind of mashed potatoes, but pimped with cabbage or kale, leeks or scallions. Milk and butter add just the right amount of creamyness. But just like Barmbrack, Colcannon strikes with a long history connected to Halloween in Ireland.

The Story Behind Colcannon and Halloween

The first one to officially mention Colcannon was was Welsh William Bulkeley in 1735. He reported about colcannon and his travels to Ireland in his diary. The eldest maintained recipes of this Halloween dish date back to the early 19th century. At this time it was proably not yet connected that much to Halloween, as people also liked to prepare it for breakfast or as a side dish along with meat.

The Irish version of Halloween, Samhain, has always been linked with fortune telling. Just like they did with barmbrack, the Irish also liked to put items into the colcannon. Depending on which item would end up on your plate, you were foreseen a rather good or bad future. The symbolisms ressembles the one of the barmbrack cake. Although it was already explained in the Halloween post before, we will go and freshen up your memory:

Receiving a coin would predict you a welathy future, a rag on the contary a future of poverty. If you found a stick in your serving of Colcannon your marriage would turn out unhappy, a button or thimble indicated a lifelong bachelorhood or spinsterhood. But if you found a ring in your portion of colcannon you were likely getting married within a short timespan.

Also it was usual for some unhappy maidens, to fill a sock with colcannon and hang it from their frontdoor. The superstition underlying this was the hope, the next Bachelor walking through the door might marry the girl.

A Short Colcannon Detour: Potatoes and Cabbage, the Two Main Ingredients of Colcannon

The real deriving of cabbage, or rather the question of the true discoverer of this plant, unfortunately is unsolved. But it is common knowledge that for at least some thousand years cabbage was part of the diet of the Celts, who also lived in nowadays Ireland. This roots in the fact, that they had words for cabbage that go back even to the Iron Age. Despite another theory of the Romans bringing cabbage from more eastern regions, it is possible that it was just the other way round. In the end, whoever brought cabbage to whom, it is a proven fact that the people of Ireland have been consuming this plant for quite a long time!

Since the potato has found its way to Europe in the late 1500s, it has been a popular food item. It is easy to grow and very cheap, and of course there are maaaaany ways to prepare in the most delicious ways. Thinking of french fries, hash browns, baked potatoes,… and of course colcannon.

So the two main ingredients have a long history in Ireland. They are easy to store and perishable for a long time. Also they are and were cheap and available for all parts of the population. Those facts probably helped increase the popularity of this typical Halloween food!

After handing out all those background infos, let’s finally get to the cooking! To prepare this delicacy from Ireland: Keep reading for a fingerlicking-good Colcannon recipe!

A Traditional Colcannon Recipe from Ireland

To prepare this colcannon recipe from Ireland you will need following ingredients:

Peel the potatoes and put them in a pot to boil.

While you leave the potatoes boiling, remove the core from the cabbage and wash the outside. Following cut it thinly and put it into a large saucepan. Cover the cabbage with some boling water from the kettle and keep it at medium temperature. Cook the cabbage 3-5 minutes, so that it is just wilted and has turned a darker green. take care to not overcook it. Once the cabbage is cooked, drain it well. Even try to squeeze as much water of it as possible. After this return the cabbage back to the pan. Add one third of the butter and let it melt.

Once the potatoes are soft, too, drain the water and return them to a their pot. With the potatoes inside, turn on the burner to low, leaving the lid off to dry them perfectly. Once this is done, add the mild and another third of butter and the chopped scallions. Warm up the milk and make the butter melt, but don’t cook it. It is just about right when the pot starts steaming.

Now mash the potatoes using a potato masher or a folk. Do not user a ricer or beat mixer as this will destroy the typical consistency we want to achieve!

As a final step, add the cabbage to the mashed potatoes and season with salt and pepper.

Tada! Your colcannon is prepared and ready to be enjoyed! Before serving it, sprinkle the colcannon with a bit of fresh parsley or chives.