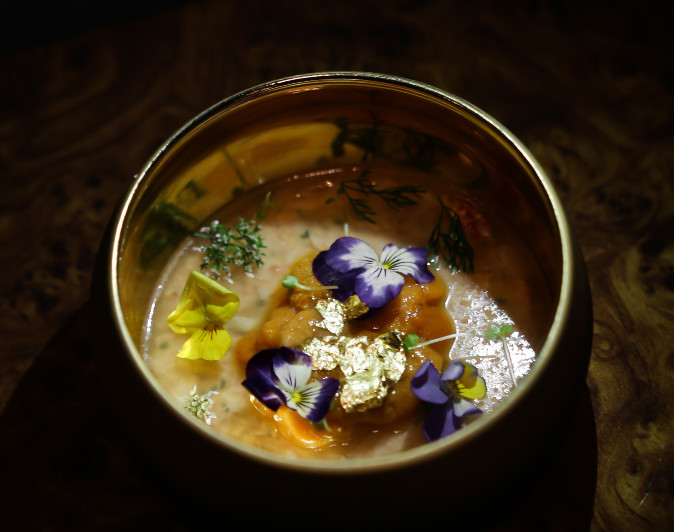 The history of Miso, just like many other fermented foods, roots back way in time! The fermented seasoning paste has been part of Japanese cooking traditions for more than 1,500 years. In this article you will find out all about its origin and the story behind the salty paste. Also we will provide you with super easy and delicious recipe for the traditional Japanese dish miso soup.

Miso is a very traditional Japanese seasoning paste. Its main ingredient can be rice, soybeans or barley. Also there is blended Miso which is a mixture of two or all three types. Miso can also be categorized in low-salt miso, sweet miso – red, light-colored and white. Miso also contains all the spectre of tastes: it ist sweet, salty, sour, bitter, astringent and umami. Especially the latter made it very popular among vegan and vegetarian cooking, because the taste of umami is easily achieved by adding meat and hard to create using only plant based foods.

As you might allready know from our blogpost about Kimchi, fermented foods are, besides being delicious and the kind of extra something to many dishes, really healthy. As all fermented foods they contain healthy microorganisms which are essentiall for keeping your guts happy and healthy.

Miso is traditionally made by adding the main ingredient and some mushrooms to barrels. The mushrooms helped to get the fermentation started. Nowadays Miso is mostly made thorugh solid-state fermentation.

Miso is considered an indespensable seasoning for Japanese kitchen. It’s popularity even goes back more than 1,300 years and it is deeply linked to Japanese history and the devolving of its cuisine.

Miso – Food of the Rich?

Although most people connect miso to Japan, it probably made its way to the East Asian island coming from China and the Korean Peninsula in the 7th century.

At first Miso was considered a luxury item as it contained rice, which was quite luxury item at that time. In that time, the Heian Period (794-1185), poeple did not use it to season foods as nowadays. If people consumed it, they simply licked it purely or spread it on their food. Because it was considered so worthy people even used it as some kind of salary, only for the elite of course, and as a special gift. The common people at that time could do nothing but dream of miso.

Because of its worth People who harvested rice at that time, peasants and farm hands, were even forbidden to use the rice themselves to ferment Miso. But as it often happens when food is getting exclusive people get creative. So the peasants and farmers simply started preparing miso using any broken rice, millet or barley. The colour of miso of such grains is slightly darker than the one of white rice. This is why darker miso still has a reputation of being ‘poor man’s miso’.

Miso goes Mainstream – or The First Ever Miso Soup Recipes!

During the Kamakura period, from 1185 to 1333, miso was first put into soup. As Buddhist monks from China brought special mortars and pestles with them. They optimized the grounding of grain for miso so that it would dissolve easily in water. This change in the making of the paste lead to the first recipes of Miso Soup! Finally, in the 13th century the production of soybeans increased and even common people were using miso for cooking.

Today there are more than 1,000 miso producers in Japan. The taste and texture of miso can differ depending on its original region. For example in Japans North people preer rice miso as it is the main region to harvest rice. In the ancient capital of Japan, Kyoto, people like their miso more sweet. And in the area surrounding the Aichi perfecture like pure soybean miso.

Today you will probably find miso in every Japanese kitchen cupboard. Once you tried it the bets are high, you wil not want to miss it in your kitchen either!

This time we will not go nuts but writing an inch long recipe but introduce a ‘more simple’ recipe. But: As already mentioned, miso soup goes way back in time! Of course we take that as sign, centuries of popularity equals real quality, right?

Another plus of this Miso Soup recipe is that it is super easy and quick to prepare. Also you can simply make a bigger batch and freeze it for hard times. It might be not that easy to ind the ingredients in a conventional supermarket. We recommend to go to a local Asian Market, besides the ingredients you might find heaps of other interesting foods and spices!

To prepare four servings you will need following ingredients:

At first, combine the dashi granules and the water in a saucepan over medium/high heat. Once it starts boiling, reduce to medium heat and add the miso paste. Mix it up very well. Aferwards add the tofu. Separate the layers of the green onion and add them to the soup. Leave to simmer gently for 2-3 minutes and the go ahead and enjoy your self-made miso soup!