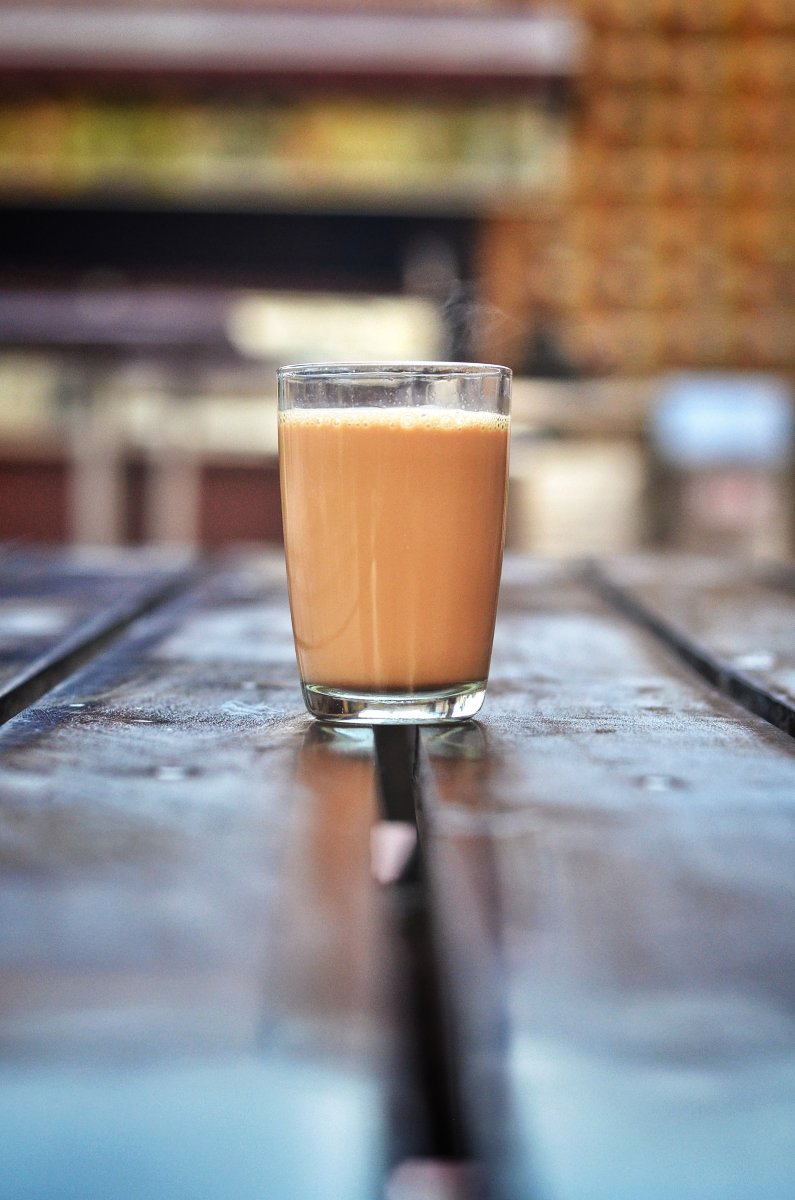 You can definetely name chai tea as one of Indias best-sellers! Nowadays it is well known and loved all around the world. But the original chai has nothing to do with the sirupy drink most western cafes serve. Find out all about the true history of chai tea from India and how to prepare it yourself.

What is Chai Tea?

Masala chai or chai tea is one of the oldest drinks in history and deeply linked with the history of India. It is a milky tea beverage, cooked with aromatic herbs and spices, traditionally cardamom, cinnamon, ground cloves, ginger and black peppercorns.

The name ‘Chai’ actually derives from the Chinese word ‘Cha’ and simply means ‘tea’. Later on ‘Cha’ changed to ‘Chai’ or ‘Cay’. Nowadays it is just a common naming for tea beverages with spices. The correct Indian term of what we think of when speaking of chai would actually be masala chai. For ‘Masala chai’ means ‘spiced tea’. Over time and especially in the western countries the first part was cut off and instead people called it chai tea. Chai tea on the other hand would be translated as ‘tea tea’, which does not really make sense.

The beverage of chai tea is part of the everyday life of Indians and so much more than only a cup of tea. It shapes the rythm of their lives and affiliated with home and hospitality. Also, chai tea charms with a variety of different flavours and aromas depending on where you drink it. It is very common that every city, village or even familiy has their own way of preparing it. Also there are different preferences of for example the kind of tea they use or which spices they add. In India chai is even sold on the streets, in trains or every crowded place you can think of, by the so called chai wallahs, ‘tea vendors’.

Depending on the region and of course personal preferences people in India drink up to four small cups of chai per day. Many people also have a cup of chai around 4 in the afternoon with a little sweet or savory snack.

The ritualistic practice of tea drinking actually goes back to ancient China. Thousands of years ago Chinese farmers started compressing freshly-cut tea leaves into small steamed blocks, submerging it in hot water and serving it with herbs or fruits. From the ancient center of tea drinking it spread to neighbouring countries and eventually all around the world.

About the exact origin of chai tea there are differing legends and myths.

There is for example one Indian folklore story that connects the origin of chai to a king of the royal court in ancient India. To improve the health of his people the king experimented with different herbs and spices to create a nurturing beverage. According to the old traditional Hindu medicine Ayerveda he used spices that were known to have a positive influence on the health. Ginger and black pepper to stimulate digestion, cardamom pods for elevating mood, cloves for pain relief, cinnamon to stimulate circulation and star anise for flavor. At this stage though there were not yet tea leaves added.

Back to The Facts: The History of Chai Tea in India

Up until the midth of 19th century China hold the monopoly of tea production. By that time tea had evolved from a high-class luxury dish to a common beverage in tea rooms and especially popular among the British. Hence the British demand for the would increase more and more. Of course becuase of that the English were thinking about how to overcome the Chinese monopoly. With the help of the trading body of the British East India Company and after numerous failing attempts they made it to grow tea in the cooler regions of India.

Within only 50 years the British took over the monopoly of international tea trading from the Chinese. To extend the consumers market the British started promoting tea also to the local population of India. At the beginning of the campaign the Indian community sticked quite a long time to their former beverage of choice, coffee. Ultimately after the First World War something like the modern tea concumption in India started to evolve. More and more tea shops popped up and more and more people added sugar and milk to their tea, following the British example.

Also, the people started adding local twists to the tea. They added sweet spices like cardamom and ginger as well as buffalo milk before cooking it up with black tea leaves. The British colonists still kept following their aim to maximize the market of tea. So the promoting and propaganda for tea comsumption went on and by the 1930s Chai had become India’s favourite street beverage.

After the Independence of the British Empire in the 1940 India kept the tea business up. Within India three world-famous tea-growing regions evolved: Assam, Darjeeling and Nilgiris. India Especially the Chai tea became an Indian bestseller and foreign exchange earner. Within India the promoting o drinking Chai was kept up, prices for the local population dropped and Chai was declared the official drink of India.

Ever since then Chai became more and more entangled with Indian culture, hospitality and traditions. Up until now Chai remains an essential ritual in the lives of the Indian people.

How To Best Prepare Your Own Masala Chai Tea

According to foodess it’s not really about the recipe of making chai, but the method.

As fresh spices you can use ginger, cardamom, black pepper, cinnamon, star anis, fennel, cloves. These are also the most common spices used in India. Of course feel free to adjust to your own preferences.

As ingredients you will need roughly

How to Make Your Very Own Chai Tea

First heat water, milk and the spices in a small suacepan on the stove. Once simmering, reduce the heat, add the black tea and wait for it to steep. Once it is done, sieve the fluid in a cup or several ones, depending on how much chai you have prepared. Last, sweeten your chai to taste.

Looking for a sweet treat to take along with your Chai? Check out this Blogpost about pastel de nata.