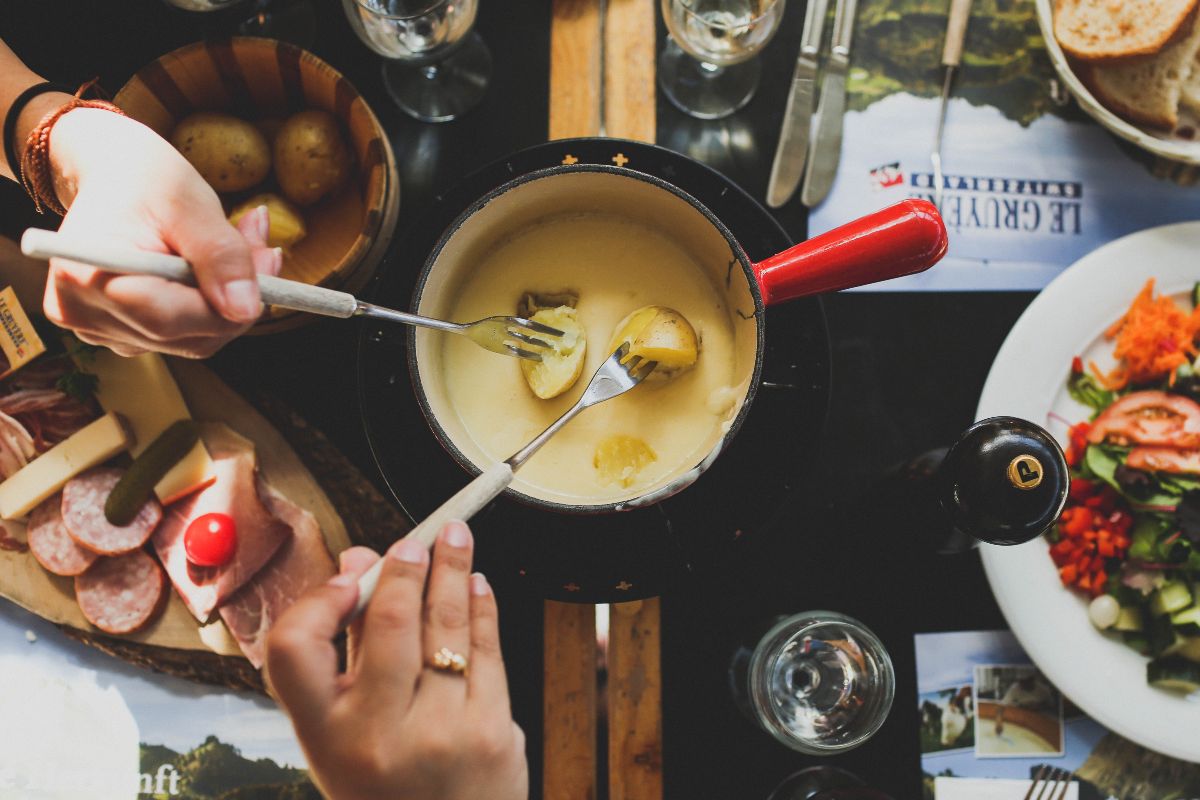 Cheese Fondue is widely known as one of Switzerland’s national dishes. You can get it in many Swiss restaurants and especially during winter it is very popular to gather around a hot pot of cheese fondue and share it all together. But although this cheesy goodness is nowadays clearly linked to Switzerland, there are different opinions of its story of deriving. Read on to find out more and to get an easy recipe to provide yourself a true Swiss fondue experience.

How to Describe Cheese Fondue?

Cheese fondue or simply fondue is a dish of melted cheese. It is traditionally served in a communal pot over a portable stove, that keeps the fondue heated. It is common to share it with a group of people. You eat it gathered around the pot by dipping bread or potatoes into the cheese using long-stemmed forks. So making or ordering fondue is normally linked to spending time with friends and turning into a convivial group event.

The Story of the Origin of Cheese Fondue

Although Switzerland claims to be the inventor and home of cheese fondue, its roots actually go back to the whole region of the western Alps. This comprises the regions of Swiss Romandie, Italian Piemont and French Savoyen. Legend has it, a poor shepherd invented it. He was said to be frustrated by his plain nutrition of cheese and bread, got creative and tried to cook the cheese. Cheese fondue was invented!

But besides that suspiciously easy invention story, there is also another one:

In Homer’s Ilias you can find a description of a dish that resembles the modern understanding of cheese fondue quite a lot. It consists of grated goat cheese, flour and wine and was melted on top of a fire place. Modern Switzerland has been, as many parts of that region, occupied by the Roman Empire. Seeing the link might not be farfetched.

The next official cheese fondue recipe you can find is almost 2500 years younger. In the cookbook of the Swiss Anna Margarethe Gessner from 1699 she writes about a plate off melted cheese and how to prepare it best. But her being the author of the oldest Swiss cheese fondue does clearly not make her the inventor. The mystery of the true creator of cheese fondue seems to stay mysterious.

So, as it mostly is with dishes rich in tradition, you cannot really tell about the true origin of the one and only cheese fondue recipe. But for sure there is no other country which loves its melted cheese fondue just as much as the people from Switzerland. And to be fair, the chances are at least not too bad that it was someone from the Alps who really invented that famous dish.

The basic ingredients of a classic cheese fondue appear rather simple. You need nothing more that garlic, white wine, some cornstarch to help stabilize the emulsification and of course, cheese. But of course it makes a difference what kind of ingredients you use exactly. Also, the type of pot you use – made from stoneware, cast iron or porcelain – might influence the taste of your fondue.

There are even countless regional or even family varieties and preferences on which wine is added – mostly regional ones – and if you even add some other ingredients like olives or mushrooms.

But one thing all recipes agree on is that a good fondue must not lack Le Gruyère AOP. This cheese is best suited to melting. Only gruyère will not only give your fondue the perfect consistency, but also the typical Swiss cheese flavor.

Traditions and Customs of Eating Fondue in Switzerland

Of course a dish this traditional and at the same time communal must be linked to some funny customs and traditions. On thing to name is the sharing of la religieuse, which is the crispy crust of over-cooked cheese on the bottom of the pan. When the melted cheese is finished, la religieuse is shared and shared alike among all people around the table.

Some families or groups o friends might also ask you – of course with a little wink in the eye –ask you to pay a forfeit after dropping a piece of bread or potato in the pot.

After talking so much about traditions and varieties of cheese fondue we hope you are now keen on finding out how to make a traditional cheese fondue yourself. Read on for the easiest but at the same time the best fondue recipe!

How To Make Swiss Fondue At Home

To make cheese fondue just the way it would be served in Switzerland, you will need the following ingredients:

Before you start, rub the inside of your fondue pot with the halves of garlic. Next, add the wine and lemon juice to the pot and heat until boiling. After this, lower the heat and gradually stir the cheeses until melted whilst stirring it. Blend the cornstarch with a bit of water and add it to the mixture. Keep stirring and cook gently until you reach a smooth consistency. Take care to not let it boil or burn.

Once you are satisfied with its consistency, you can put the pot on top of a portable stove on your table and start the fondue party by dipping the bread cubes into the cheese.

This recipe was adjusted from a recipe from BBC food.

Hungry for more recipes including cheese? Check out this blog post about Fiadone, a sweet dessert from Corsica!