The Pretzel – The History Behind The Famous German Pastry 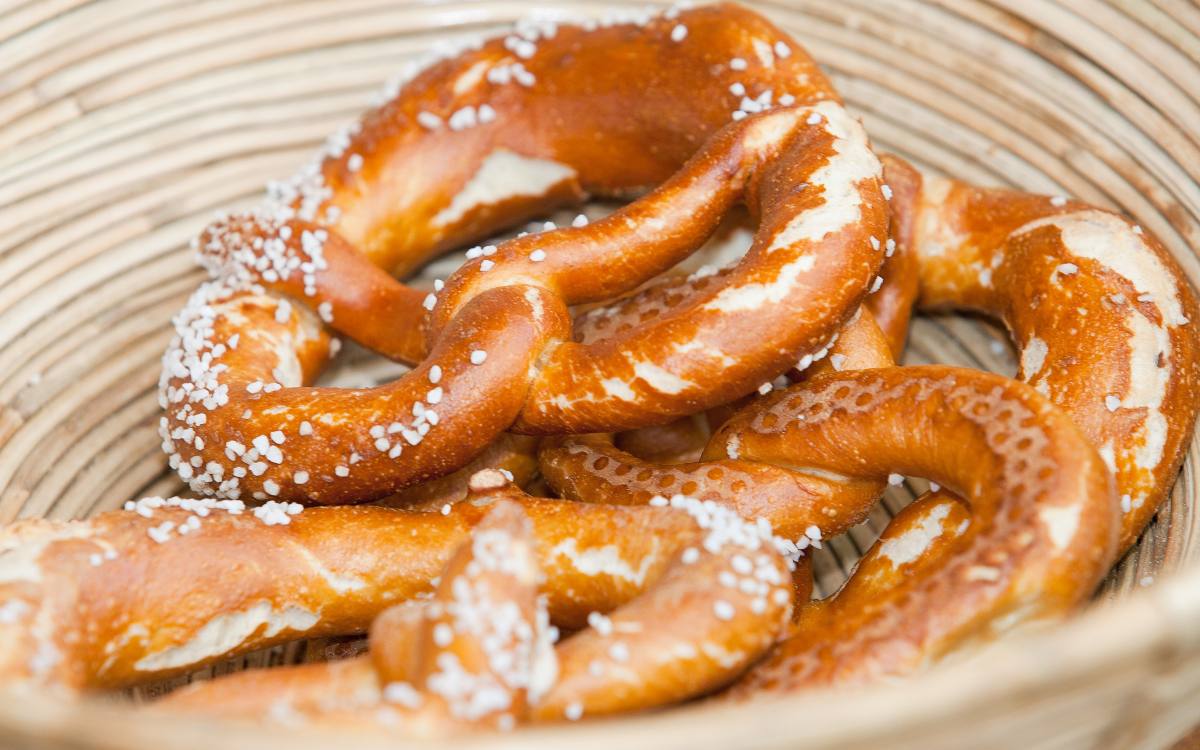 Besides beer and sausages, the shape of the German pretzel is probably one of the key figures linked to the perception of German culture. Besides many exaggerated stereotypes probably every country faces, the pretzel really is one of the most popular pastries among Germans. And it has been for many years, even centuries. Read on to find out more about the history of the German pretzel!

To Get Things Started – Some Facts About The German Pretzel

A Pretzel, ‘breze’ or ‘brezel’ in German, is a type of baked pastry in the shape of a knot. There are sweet and salty pretzels, depending on what kind of dough they use. The typical German pretzel though is salty and complemented by lye treatment, which gives the pastry its famous tanned skin and flavor.

It is especially popular in the southern parts of Germany, in particular Bavaria and Swabia. The typical Swabian pretzel, varying in the thickness of its strings, distinguishes from the Bavarian one, which traditionally is thicker.

Especially in these regions, pretzels are a very common snack. Particularly for younger children, as they are easy to hold and eat without making a mess. You could probably say, as a German you don’t really have a choice about whether you like pretzels or not. Germany simply are accustomed to it from as early as you can eat solid food.

You can get Pretzels in every German bakery and in some cities, especially in Bavaria, you will even find pretzel stands around public spaces like markets or train stations.

So where does this fascination and seemingly never-ending love for pretzels in Germany come from?

The pretzel, or at least its shape, is probably even older than 1,000 years. The oldest image of a Pretzel was found on a painting of the Last Supper from the 11th century. The shape probably devolved from the Roman ring shape to a double-six and developed later to the typical pretzel shape.

Of course, there are also myths and legends about the grandma of all German pastries. As already mentioned, pretzels are most popular in the two southern regions of Germany, Swabia and Bavaria. So it is only fair, to tell one story each ‘pretzel home’ of the invention of this popular pastry.

How the Invention of the Pretzel Saved a Baker’s Life

The probably most famous story goes back to the 15th century. At that time, in a small German city called Bad Urach, the yard baker of the ruling earl invented it from deathly necessity. The earl, Graf Eberhard V., was sick of the bad bakin skills of its baker Frider. The earl threw Frider in the dungeon and sentenced him to death. But before the sentence was executed, Frider was offered one last chance. The earl told him: “Dear friend, bake a loaf through which the sun can shine three times.” If he completed the task within three days, the earl would give him back his old life.

Frider was more than happy, but lacked good ideas under the huge pressure he had to face. In the end it was his wife who unintentionally gave him the winning hint. She was losing her patience, too, and watched him standing in the door frame, her arms crossed. Legend has it, the shape of her arms inspired Frider to shape the German pretzel as we know it now – a loaf through which the sun can shine three times.

Or: The German Pretzel – A Lucky Coincidence?

As already mentioned above, besides Swabia the pretzel is also, if not even more, popular in the German state of Bavaria. Of course, there must be some kind of myth linked to it as well. One more legend about the history of the German pretzel:

The most famous Bavarian story of the invention of pretzels dates back to the year of 1839. The royal baker Anton Nepomuk Pfannenbrenner of the purveyor to the court, Eilles, had to prepare the breakfast for the Bavarian king at that time. Instead of glazing the pretzels as usual with sugared water, he accidentally used the lye he had put next to it to clean the kitchen afterwards. The ‘catastrophe’ went on and the pretzels were delivered to the royal court. But against all odds, the royal ambassador was filled with enthusiasm and the pretzel, as we know it now, was invented.

But, to be honest, this story lacks a lot of proven facts. There is no proven evidence of a royal baker named Pfannenbrenner. Also, the foundation of the firm of the purveyor to the court, Eilles, took place 24 years later in 1863. But of course, the story sounds nice!

Considering the rich variety of pretzels nowadays, sweet, salty, buttery, however, it is hard to imagine that it used to be a typical fasten food. It is considered proven fact that in the Middle Ages, pretzels were served as fasten and festival dish in the Christian monasteries. Around 1200 it also made its way to the secular gastronomic culture.

The consume of pretzels was traditionally linked to high festivities like New Year, Epiphany, Shrove Tuesday and All Souls’ Day. During the period of fasting the serving of pretzels was rather plain, without added salt and the prepared without the typical lye treatment.

But as already mentioned above, the pretzel has changed in their history. It devolved from a dish linked to special occasions to some kind of German fast food. People nowadays eat in in between meals as some kind of snack or even use it like ordinary bread and top it of with cheese, cream cheese or butter. Some crazy people even swear by Nutella on brezels, but we will leave this an undiscussed matter.

We hope, you liked this article about the history of the German pretzel. And the next time you go there, or if you ever go there, make sure to try the typical German ‘breze’!

Did you like this rather informational blogpost about the history of German pretzel? Check out this post about the health benefits of green and rooibosh tea!