Flowers on the table: from Odyssey to a cookies’ recipe 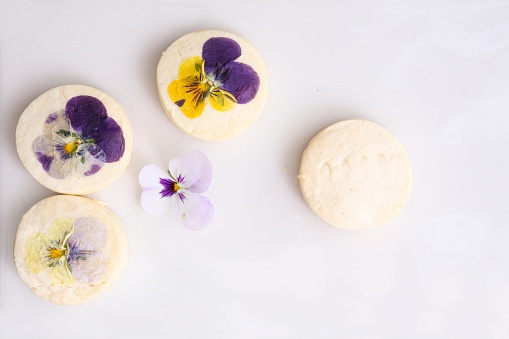 It is said that man has been blessed with the fruits of creation, with all the delights that can be found on the earth on which we walk. And this, of course, does not only include “fruits” in the strict sense, but everything that can somehow be turned into edible food. One of my favourite cartoons on the internet reads: “To win me over, don’t give me a bunch of flowers, give me a packet of fried food”. What if flowers could be eaten too?
Let’s discover together a delicious recipe for biscuits that will impress all your guests. But first, let’s take a look at the people who went down in history for their diet based on Lotus, a flower apparently able to relax even the most tense of nerves.

Odyssey and some geography

The Lotus people, whose name derives from the ancient Greek Λωτοφάγοι lotophágoi, from λωτός lotós “lotus, fruit of North Africa” and φαγεῖν phageîn “to eat”, are a mythical people met by Odysseus during his long wanderings.

Scholars have tried for decades to trace the Homeric hero’s travels on the map, but the results have been poor to say the least. One school of thought even places man’s routes in the North Sea basin, leaving lovers of historical geography not very happy.According to these countless reconstructions, the land of the Lotus people would be located in Cyrenaica, a historical-geographical region on the coast of eastern Libya.

The real question, however, is “who cares?”.
Have you ever read a fairy tale that had precise time indications and geographical coordinates? The beginning is always the same: “Once upon a time, in a country far, far away”. Once upon a time when? How far away? This is the point. It is not important. This is not a treatise on history, we are not talking about events that really happened, which need a precise positioning in space and time. The Odyssey wants to convey a message, to be a model for a society, that of the heroes, not a map of the ecumene.

But who are these Lotus eaters? According to the compositional structure of the Odyssey, they are supposed to be one of the ‘good’ peoples. Indeed, academics have traced a pattern within the poem: even-numbered journeys lead Odysseus to safe lands, while odd-numbered journeys always conceal dangers.
The one to the island of Kythera is the second port of call, which means that, technically, the lotus-eaters are not dangerous. But is this really the case?

The Lotophagi: a very relaxed people

In the 9th book of the Homeric poem, verses 82-102, to be precise, we are told that Odysseus and his companions land on this island of people who eat the fruit of the lotus flower. The men are greeted with jubilation and are invited to join the ‘banquet’.
It is worth remembering that in the world of ancient Greece, the concept of ξενία (Xenia) is of fundamental importance, what distinguishes a civilised people from a barbarian one. The guest is protected by Zeus and whoever violates the sacred laws of hospitality faces his wrath. Earlier we were talking about good and bad people: in reality, the difference lies in the way they welcome guests. I mean, Polyphemus EATS his guests and Circe turns them into pigs…
But back to our Lotus-eaters: second trip, even number, therefore welcoming people.

The companions of Odysseus are therefore offered these flowers, which have a special effect on them. The principle is not very different from that of weed. They begin to relax and enjoy their stay there, forgetting the problems that plague them. The banquet goes on for days, while Ulysses is increasingly worried. In the end, the hero is forced to drag his friends away because the effect is too much. Men do not only forget their suffering and pain caused by the long Trojan war, but they also start to forget their families, their homeland! Let us not forget that this is not a cruise to discover new lands: theirs is a tormented wandering, a struggle to return home. The Oikos is sacred to the Greeks: one MUST return home. This begs the question: are the Lotus-eaters, despite their hospitality, really ‘the good guys’?

But don’t worry: the recipe we are going to discover today has no strange effects and won’t make you forget anything. Let’s discover together how to prepare a recipe that will surprise your guests: they will never forget your delicious biscuits!

Well, let’s change the topic and let’s find out the best recipe for some incredible and unforgettable biscuits, made with colorful and delicious flowers!

FOR THE ICING AND DECORATION:

Let’s start with the proceeding for the pastry:

Make a well in the flour on the work surface. In the centre, place the cold butter in flakes and mix quickly with your fingertips until the mixture is crumbly.
Make a well with the butter and flour crumbs and add the sugar, egg yolks, salt and a tablespoon of grated lemon zest. Amalgamate the ingredients, knead them and form a ball. Wrap the dough in greaseproof paper and leave it to rest in the fridge for at least an hour.

After an hour has elapsed, roll out the shortcrust pastry with a rolling pin on a floured surface to a thickness of 3 mm. With two festooned pastry cups of 8 and 2 cm in diameter, cut out about 24 shapes with holes in the centre, using the scraps. Place the biscuits on two baking sheets and keep in the fridge until the oven reaches 180°C. Bake the biscuits one tray at a time, it will take about 10 minutes for a light browning. Remove from the oven and allow to cool. Sift the icing sugar into a bowl, add one teaspoon of lemon juice at a time, stirring with a whisk. The result is a thick, fluid glaze.

Now you want to spread the icing over the surface of the biscuits using a spatula, decorate with the edible flowers and leave the icing to crystallise for about an hour before serving.

Your flower cookies are finally ready: be sure you make your guests confortable! If you like, you can serve some good tea too! Here you have an article on how to find the perfect tea for your afternoons!