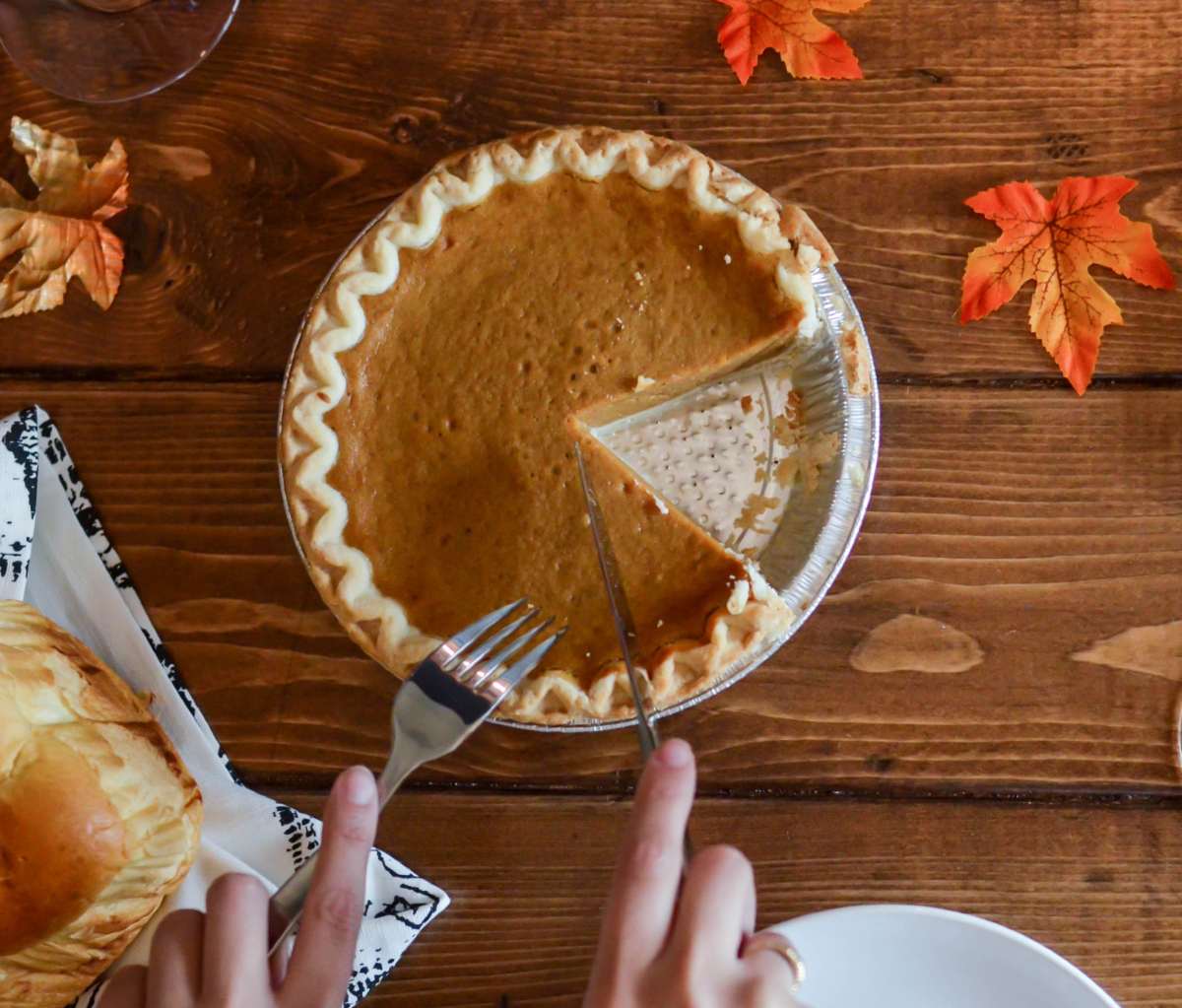 These days, it really seems like time is flying. But actually, we already are on the finish line of 2021. Having arrived in November also means one of the most famous US-American holiday – Thanksgiving – awaits just around the corner. For most non-Americans, this holiday is probably linked to tables overflowing with food and of course, the famous turkey. But Thanksgiving roots in centuries of American history and stands for so much more than only overeating with family and friends. In this blog post you will find out more about the history of this famous holiday. Also, instead of presenting the most famous Thanksgiving dish, the turkey, we will go for a side character that has to be part of every Thanksgiving table, too: pumpkin pie. Read on to find out more about the history and traditions of Thanksgiving and how to make Thanksgiving pumpkin pie!

Thanksgiving is traditionally held on the fourth Thursday of November. It is one of the most prestigious holidays in the US and a national holiday. It is America’s most important family celebration. Also, it is quite common to invite your friends, too. Often all generations of a family gather and come together from all parts of the country. For this reason, streets, train stations and airports are never more crowded than on Thanksgiving.

Besides eating a lot, really, a looot of food, there are many more traditions linked to Thanksgiving. Also, its history roots almost 400 years back to the first settlers who arrived in the US.

The Story of The First Thanksgiving

To be honest, once again it is hard to tell, which story of ‘the first Thanksgiving’ is the most realistic one. There are differing opinions on the starting point of the famous celebration. Some even set it in 1541, when the Spanish conquistador Francisco Vásquez de Coronado celebrated together with the indigenous tribe of the Caddo in Texas to thank for the discovery of foods by the Spanish expedition. In 1565 another Thanksgiving-like festivity took place in 1565. In that year, Pedro Menéndez de Avilés and his people celebrated their safe arrival in America.

But the probably most famous story goes back to around 1620 when a ship of one hundred British colonists, heavy with hopes for a better life, headed for America:

The Tough Journey of the British Pilgrims to the New World

In September 1620 the Mayflower, a small ship, left the English city of Plymouth heading to America. Aboard you could find a mixture of passengers. There were religious separatists seeking a new home, as well as other individuals, hoping for prosperity and land ownership across the ocean. The crossing, which is said to be not the most comfy one, took 66 days and in the end they did not even arrive where they planned to, near the mouth of the Hudson River, but at the tip of Cape Cod. After this bummer, it took them one more month to finally get to their planned destination, Massachusetts. There, the pilgrims later founded a village, which they named exactly the same as their British starting point: Plymouth.

As the pilgrims arrived right in the middle of the American winter, they spend the cold months mostly aboard of the Mayflower. Aboard, they suffered from many diseases and in the end, only one half of the passengers lived to the next spring. Once spring had sprung, the settlers took up their courage and entered the country. Surprisingly, very soon, the indigenous tribe of the Abenaki visited them and even greeted the pilgrims in English. For the pilgrims, the visit can be named the end of their suffering. Because the native people took them by the hand and showed them, how to cultivate the land they were now to call their home.

The First Thanksgiving of The Pilgrims

After they had lived through their first year in America and the harvest had proved successful, the pilgrims were in desperate need for a party. Governor William Bradford took the lead and organized a celebratory feast. He also invited a group of Native American allies. The feast, now remembered as America’s first Thanksgiving, lasted three days. The exact menu of that feast is not delivered, but it probably did not resemble the food on modern thanksgiving tables. But it gets clear, thanksgiving has been celebrated in America for at least 400 years.

As already mentioned, thanksgiving nowadays is probably the most important holiday of the year. To extend its celebration, many people also take a day off on the following Friday, which is known as Black Friday.

The Thanksgiving menu traditionally consists of dishes that were said to having been served in the first celebration, too. But actually, it is not very realistic to think, the pilgrims had turkey, mashed potatoes and pumpkin pie in 1621 as Americans do now. But let’s just let them believe in this myth and concentrate on modern Thanksgiving traditions.

When friends and family gather on that holiday, it is quite common to say a prayer of gratitude. Also, in less religious families, the members take turns and say out loud, what they are thankful for. It is also quite common for many individual families to have their own little Thanksgiving routines and traditions.

Another famous tradition is fulfilled by the US-American president. Each year on Thanksgiving, the industry associations gift a living turkey to the White House. Since 1990 the president normally pardons the turkey so that it will not be slaughtered. What an act of kindness, regarding the high number of fellow birds being slaughtered each year, right?

Finally, The Yummy Part Of The Article – How To Make Thanksgiving Pumpkin Pie

Now that we have caught up on the history of Thanksgiving, let’s get to the delicious part of the article. As already mentioned, Pumpkin Pie definitely doesn’t make the protagonist on most people’s Thanksgiving table. Nevertheless, it is indispensable on a typical Thanksgiving menu and the perfect ending to the traditional feast.

To prepare your very own Thanksgiving pumpkin pie, you will need the following ingredients:

First, put the pumpkin in a large saucepan along with as much water to cover the pieces. Cover the pot with a lid and let simmer for 15 minutes, or until the pumpkin is soft. Drain it and let cool.

Next, heat the oven to 180C/ gas 4. Roll out the pastry on a lightly floured surface and use it to line a 22 cm loose-bottomed tart tin. Chill in the fridge for 15 minutes. Then Line the pastry with baking parchment and baking beans. Bake for 15 minutes. Remove the beans and the paper and bake for further 10 minutes until the base is pale golden and slightly crispy. Remove the dough from the oven and let cool slightly.

Now increase the oven heat to 220C/ gas 7. Mash the cooled pumpkin by using a potato-masher or by pushing it through a sieve and put it into a large bowl. In another bowl, combine the sugar, salt, nutmeg and half the cinnamon. Mix in the beaten eggs, the melted butter and milk. Last, add the pumpkin purée and stir it all together. Pour the mixture in the tart shell and bake for 10 minutes. After this, reduce the temperature to 180C/ gas 4 and bake for 35-40 minutes more. The cake is done, once the filling is all set.

Leave to cool, then remove the pie from the tin. Mix the remaining cinnamon with the icing sugar and dust over the pie. The pie is best enjoyed chilled and, of course, in good company.

This recipe was taken from BBCgoodfood. If you are looking for more delicious cakes with a story linked to it, check out our blog post about barmbrack.