Ginjinha – The Story of The Famous Liqueur From Lisbon 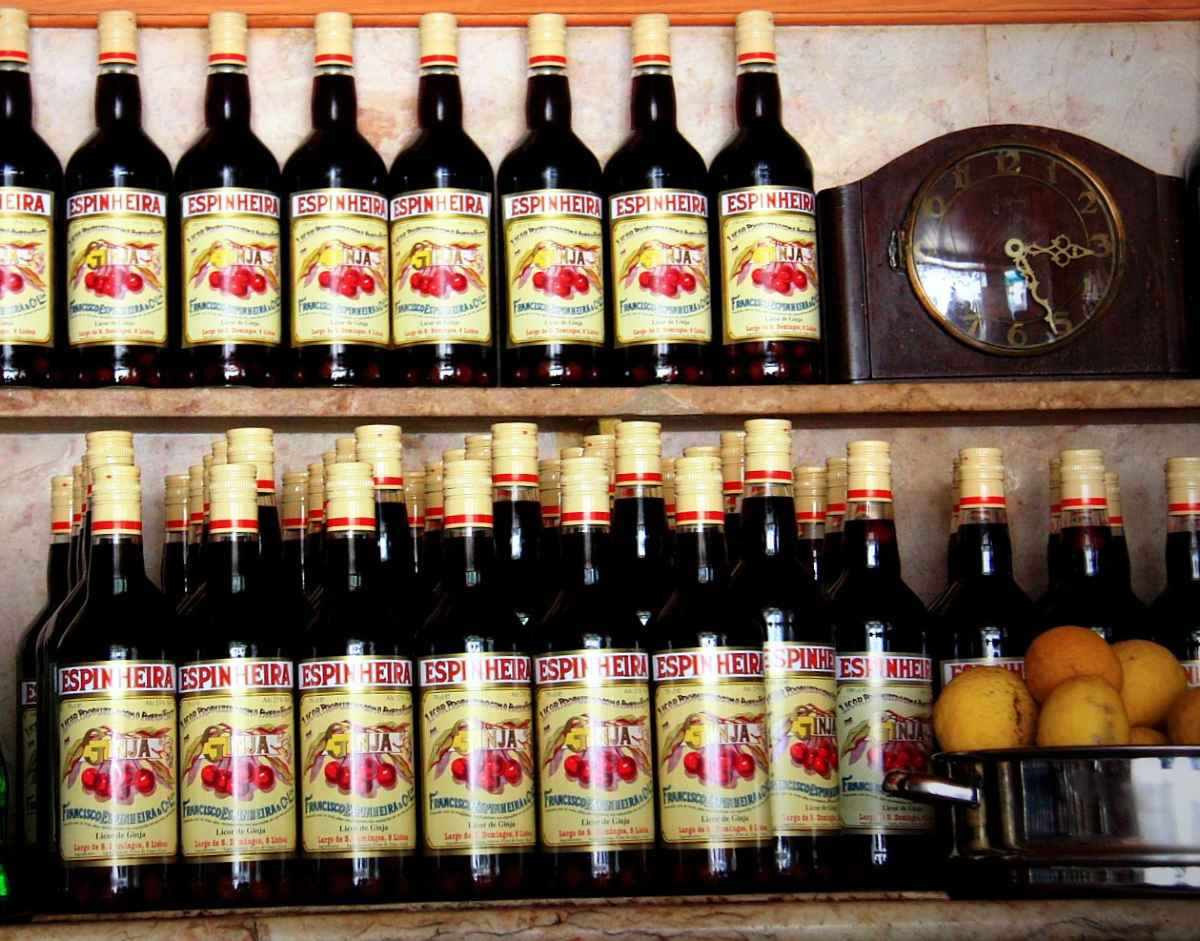 It seems like this Blog slowly is turning into a wine and liqueur site, but the truth is: There are just too many delicious and locally made alcoholic drinks to not mention them! Just like ginjinha, the probably most famous liqueur from the region of Lisbon. This liqueur is just as popular among tourists as among locals from Lisbon, for valid reasons. It is super delicious and deeply linked to Lisbon and its history. Read on to find out more about the story of ginjinha, the famous liqueur from Lisbon!

To make ginjihna, fruit brandy, aguardiente in Portuguese, is loaded with some sugar and the above-mentioned Morello cherries and simply left alone for a few months. Sometimes people also add herbs or spices, the most common being cloves and/ or cinnamon sticks.

The Rise of the Ginjas

The ginja, the Morello cherry, does not origin from Portugal itself. Instead, the Roman emperors have most likely brought it all the way from Constantinople and caused its spread in many of their colonies. But up until the 18th century, it was not very common to harvest and consume the ginja. However, on the peak of the Renaissance time it had a big comeback and those cherry trees started to become more and more popular in Portugal and the region of Lisbon in particular.

This rise of popularity was caused by some, from the perspective of modern science rather questionable, medical recommendation. The druggist Jean Vigier released a treatise in 1718, stating the health benefits of drinking ginjinha. According to the Physician, who also performed the duties of being the court physician of Portuguese King João V, would help to fight of fever, diarrhea and mood swings. Of course, the people at that time would happily act on this very official advice and drink ginjinha to improve their health. Coincidentally, the big run on ginjinha bars in Lisbon and other Portuguese cities synchronized with the big tuberculosis epidemic in the 19th century.

The Story Behind The Question

When you enter a bar in Lisbon and order a ginjinha, there is one question you will most likely get to hear.”Com o sim ela?“, literally meaning “with or without her”, “her” referring to the cherry. This question derives from a story of a ginjinha rivalry that took place in Lisbon in the early years of the 20th century.

At that time, there was a Galician immigrant, Francisco Espinheira, who reputedly founded the first ginjinha establishment in Lisbon, the bar A Ginjinha. Having received the recipe from a Franciscan monk, he was pretty convinced about the potential of this drink and decided to make a business out of it. Having accomplished the first step, he passed the bar on to his son. His son, Espinheira Jr., after the father’s death, took it to the next level. In the beginning of the 19th century, the name Espinheira stood for ginjinha like Coco Cola does for Coke nowadays.

But of course, monopolies are not made to last. And this monopoly was even taken down by one of its very own ranks, João Manuel Lourenço Cima. He was the companies star employee and favorite of the company’s boss, Espinheira Jr. Espinheira Jr. even loved this employee that much, that one evening, he offered him the hand of his only daughter. And asked: “Com o sem ela?“, “With or without her?”. Unfortunately for old Espinheira, his daughter was not quite to Cima’s liking. The company’s star refused.

But the story does not only end with this major insult of refusing to enter the bosses family. Also, Cima left the company and even founded his very own brand of ginjinha. He opened a bar called Ginjinha sem Rival, meaning ginginja without competition, right across the street of Espinheira’s establishment. A war of giants began and for years they fought for the pole position of selling the famous liqueur in Lisbon. The rivalry went on for quite some decades, both parties trying to prevail the other one. Nowadays, the enmity between the two brands has faded, both establishments still exist and of course, the ginjinha has remained. But the famous question on how you would like to have your drink served stood unchanged.

So now you already know which question awaits you ordering a ginjinha in Lisbon or any other part of Portugal. But although it comes in small shot-like glasses, you do not have to drink it in one go. Because it tastes actually kind of sweet with a bit of a sour aftertaste, caused by the Morello cherry, there is absolutely no need to rush its consumption. Also, it is more than socially acceptable to take it at any time of the day. No local from Lisbon will judge you for having ginjinha before breakfast.

Except of the countless bars that offer ginjinha, you can also buy it in many of the small and crooked streets of Lisbon’s historic center. There are countless old ladies who sell a homemade version of the liqueur to supplement their retirement. Mostly, one glass of ginjinha costs around 1.50 to 2 Euros. This makes it very easy to open the wallet and support those sweet ladies.

So when in Lisbon, please make sure to try this delicious and historic liqueur. Another Portuguese delicacy you have to try is the pastel de nata. Check out this blog post about it to find out more!