Paella – All About And How To Make The Spanish Signature Dish 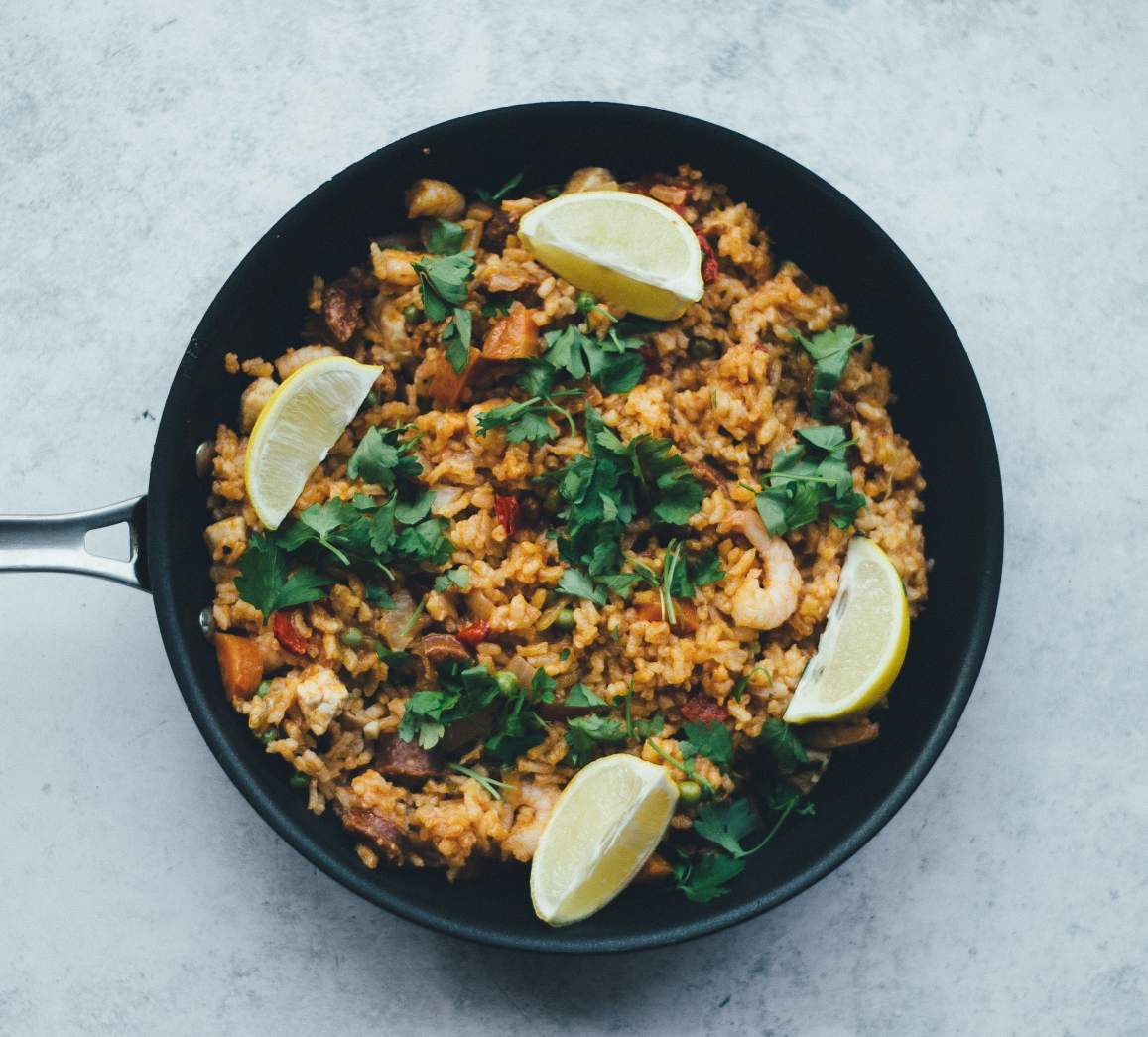 It is December, the time to eat as many sweets as you can (regretting this is normally reserved for January). And, of course, we have already published some sweet Christmas themed recipes on this blog. If you feel like taking a break from all the Christmas craze, at least in a gastronomical sense, keep reading. In this blog post, we talk about the savory, Spanish dish paella, about its history and how to make it yourself. Besides of taking your mind off any negative Christmas feelings, a plate of paella definitely also adds some Spanish sunshine to your table.

When you think of ONE dish you connect to Spain, it probably is Paella. Nowadays, the dish has already gained quite some popularity outside of Spain. And – naturally – also the Spanish love their Paella. If you do not know what Paella is, don’t fret, we will get us all on the same page:

Paella is a typical Spanish rice dish. Besides rice, it also contains different vegetables. Depending on the recipe, different kinds of meat, mussels, fish or even snails also form part of the paella. Also, a real paella has a bright yellow color because it is traditionally seasoned with saffron.

Paella is a dish traditionally joined in company and even consumed straight from the big paella pan. In many Spanish families, it is a stable weekly tradition to prepare paella on Sundays and to enjoy it all together.

Although Paella nationally is considered a typical Spanish dish, within Spain, it is linked to the region surrounding the city of Valencia. Over there, Paella is much more than only a dish. To the Valencians, it is one of their identifying cultural symbols.

The Name of Paella

The word paella probably comes from the kind of pan, that is used to make it. The local people from Valencia speak Valenciano, a language similar to Catalan. Paella simply is the Valenciano word for the pan, that is used to make paella. The Spanish word for it is paellera. The pan you use to make Paella also is more than essential to many Spanish people. Meaning, if you do not prepare it in a paellera, better don’t call it paella in front of a Spanish.

There is also another story about the naming of paella. According to a rather romantic legend, paella was first prepared by a lover for his female fiancée. When asked, who he made the dish for, he answered ‘para ella‘, meaning for her. Legend has it, with time passing by, the term changed to paella. We admit, this does not sound like a bulletproof theory. But maybe, just maybe, there is a small grain of truth in this story. Although in Spain most families stick to the patriarchal way of labor division, women doing most of the cooking, preparing paella is usually left to the men.

As already mentioned, Paella originally comes from the region of Valencia. And in the beginning, people definitely did not consider it a fancy dish. Instead, paella was a dish of farmers and farm laborers. They simply cooked it right on the fields, using rice and whatever was to hand close by. So they added different kinds of veggies – whichever were growing on the fields – onions, snails and beans to get some texture. Sometimes, even rabbit or duck went into paella, on special occasions also chicken. And of course, to add the special color, a true paella could not lack a bit of saffron.

Nowadays, the dish has spread all around the country and there are many differing paella recipes. The Valencian paella, meaning the original one, has rabbit, duck and snail in it. Seafood paella, as the name indicates, is rather filled with different seafoods than meat. Mixed paella can have different kind of meats and seafood and of course, there is also a vegetarian version.

We hope, we already got you curious to try to make paella yourself. Keep on reading to find out how to make the Spanish super seller!

A Recipe For Delicious Vegetable Paella

For everyone to be able to enjoy this paella, we chose to introduce you to a vegetarian version of the traditional Spanish dish. If you want to add some meat or seafood, of course, feel free to do so! Also, to make this paella, you will need mostly store cupboard ingredients, which makes it an easy dish to prepare without even needing to run to the supermarket.

To prepare 4 servings of vegetable paella, you will need the following ingredients:

How To Make The Vegetable Paella

Start by heating the oil in a large non-stick frying pan, or a shallow flameproof casserole. Next, add the onion and fry 8-10 minutes or until very soft and lightly browned while stirring occasionally. Add the garlic and leeks and cook for 2 more minutes.

Stir in the rice and cook for a short moment before adding paprika, saffron and bay leaves. Stir a few seconds longer, then add the sherry or wine and bring to simmer. Next add the vegetable stock, mix well and leave to cook for 10 minutes while stirring occasionally. Add some water if the rice is looking dry.

After this, add the artichokes, peppers and olives. Mix it all very well and reduce the heat to very low. Cook for about 15 minutes until most of the liquid has been absorbed. If, after 15 minutes, the rice is not quite tender enough, cover the pan with a lid and cook for 5 more minutes.

Finally, garnish with fresh parsley and serve with lemon wedges. This paella is – of course – best enjoyed in good company!

If you are looking for something sweet to have after this paella, check out our blog post about the Corsican fiadone.

This recipe is based on an article of BBC food.