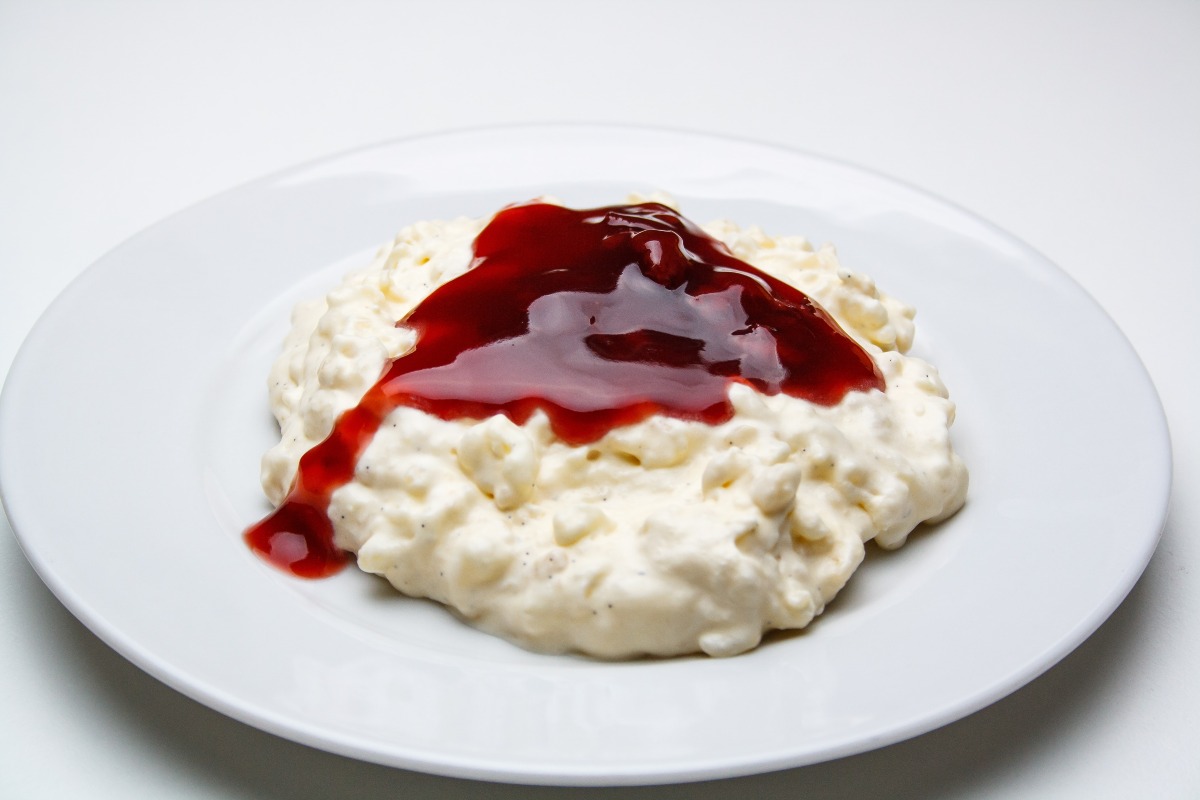 Christmas definitely is one of the holidays most loaded with foods. So of course, we will get the best of it on this blog and benefit at least from some of the thousands of regional festive recipes during the pre-Christmas period. This blog post will be starring the Danish Christmas dessert Risalamande. It is a sweet, creamy rice pudding, traditionally topped off with hot cherry sauce. Besides being super delicious, serving Risalamande is also connected to a Danish tradition you could include into your Christmas festivities. Of course, you can prepare this dish every other day of the year, too. And, if you are a fan of sweet main dishes, it can also be enjoyed as the first plate as it mainly consists of rice. Seems like Risamalande offers many nice benefits, right? Read on to find out more about it!

Risamalande – Easy Yet So Delicious

Risalamande definitely belongs to the Danish Christmas feast, like the turkey to every Thanksgiving table. Unlike in the US, in most European countries Christmas is celebrated on Christmas Eve and not during the day afterwards. After feasting on whichever Danish Christmas dishes were chosen, the Risalamande traditionally rounds up the evening.

Risamalande is made of rice pudding mixed with whipped cream, vanilla, almonds and sweetened with sugar. The name derives from the French dish riz à l’amande, meaning rice with almonds. But even if it might have been inspired by the French version, nevertheless, Risalamande has truly Danish origins.

The history of Risalamande probably goes back to the beginning of the 20th century. Around that time the upper class of Denmark had already replaced the traditional Christmas dessert – rice porridge – with Risalamande. But until the late 19th century, two of the main ingredients of it, almonds and cinnamon, were pretty expensive, thus reserved for the richer part of the population. After the Second World War, the popularity of Risalamande grew among all classes. This growth in popularity can be explained by some kind of marketing trick: Risalamande was simply touted as a ‘savings’ dessert. Adding whipped cream would enlarge the dessert and make the rice last longer. Cream at that time was a real bargain buy, whereas rice was not the cheapest food to find. Because of the compared high costs of almonds during the years after WW II, especially in his beginning, Risalamande lacked the fine nut.

The Tradition Of Finding the Almond

Nowadays, though, the almond is the center point of one very typical tradition in Denmark. Eating Risalamande actually is not only about the pleasure of eating it. Of course, it makes the creamy, sweet and culinary highlight at the end of a Danish Christmas dinner. But also, the tradition of looking for the one unchopped almond adds a playful element to it.

If no one finds the almond in the first serving of Risalamande, it will most probably lead to a second or even third serving. Because of this, looking for the uneaten almond on Christmas Eve can easily result in overeating.

How To Make Risalamande At Home

Hopefully, your mouths are already watering, and you are ready to prepare yourself some Risalamande.

For about 6 servings you will need the following ingredients:

First, prepare the rice pudding. To do so, add rice, salt, vanilla and milk to a large pot and to a slow simmer. Make sure not to let the milk boil over or to burn the rice by giving it a frequent stir. After about 30 minutes the rice should be cooked. Remove the pot from the heat and let the rice pudding cool down completely.

Once cooled down, add the sugar, the cream and the almonds to the rice pudding and stir in until well mixed. Do not forget about the one whole almond. Heat the cherry sauce in a small pot. Finally, add the Risalamande to the bowls and top it off with the hot cherry sauce.

If you are looking for a hot beverage to have along with your Risalamande, check out our blog post on the Northern mullet wine glögg.

This recipe was inspired by the Greedy Gourmet.