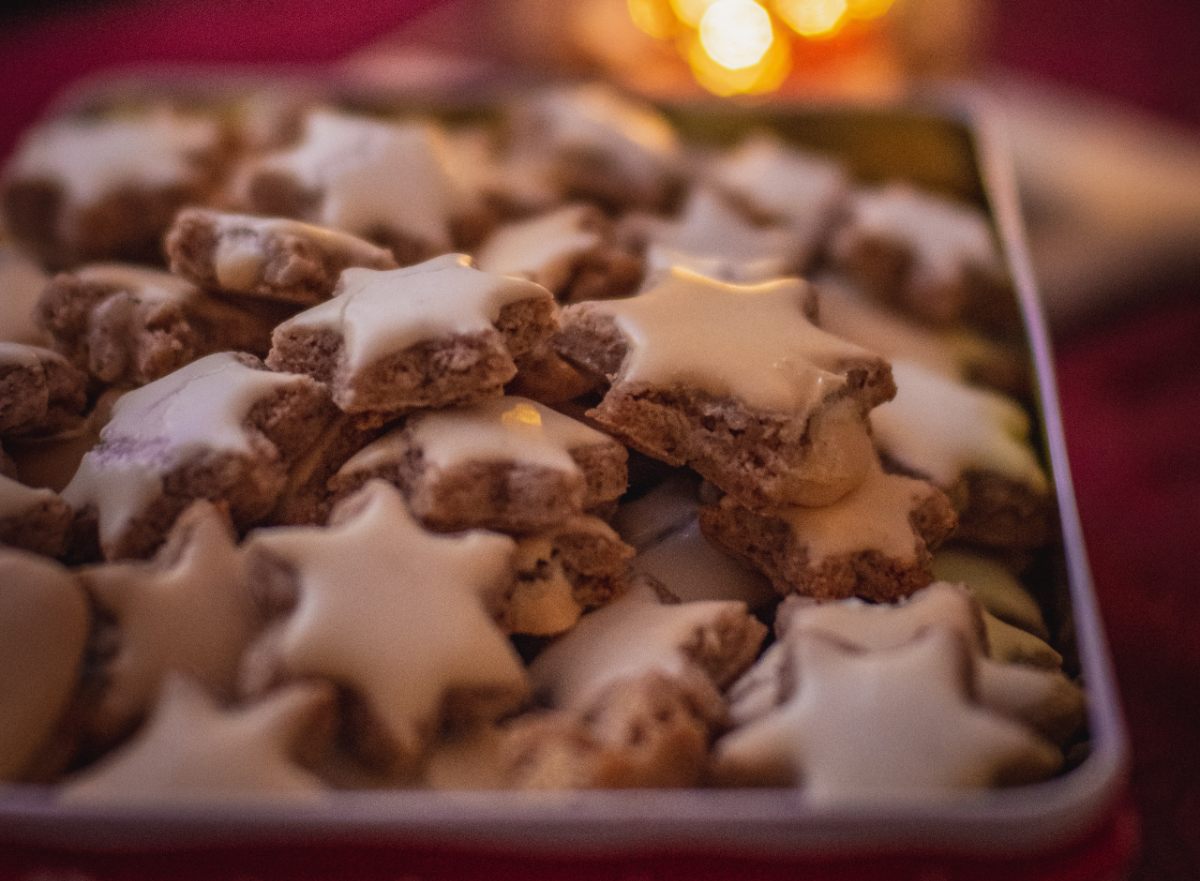 One thing about Christmas is for sure: Every country celebrates it their very own way. Also, these traditions always go along with typical dishes to celebrate the most festive holiday of the year. On this blog, we have already published quite a lot of Christmas related recipes to get you inspired. The star of this article, quite literally, comes from Germany and is one of the most delicious Christmas cookies you might have ever tried. Read on to find out more about the delicious Zimtsterne, cinnamon star cookies, about its starring spice and how to make them yourself.

In Germany, it is quite common to bake lots of different types of Christmas cookies during the weeks or even months before the holidays. Visiting a German family around that time of the year, you most certainly will be offered some homemade cookies, typically stored in a colorful tin can. Within Germany, the star shaped Christmas Cookies are definitely one of the most common ones and must not lack within a well sorted cookie jar.

Although the cinnamon stars have gained popularity all around Germany, they originally come from the region of Swabia. It is located in the south of Germany and besides the Zimtsterne also home to Kaesespaetzle, the German version of Mac’n’Cheese.

Probably the best part about these cookies is: You don’t even need lots of fancy ingredients. Traditional Zimtsterne require no more than eggs, grated almonds, icing sugar and the most important ingredient: Cinnamon. This time, unfortunately, there is no funny story linked to the recipe. Cinnamon comes from rather far away places and therefore has not been affordable to the majority of the population in a long time. This is why those cookies cannot look back at a long history.

But, nevertheless, let us take this opportunity to have a closer look at where cinnamon comes from before heading to the recipe of these delicious Christmas cookies.

Cinnamon – The Starring Character In Most Christmas Bakeries

Cinnamon is probably the number one Christmas spice. This even shows in its sales figures, which traditionally rise around that time of the year. But where does it actually come from?

Like many other aromatic spices, cinnamon originally comes from a rather far away place. It is native to the countries of India, Sri Lanka, Bangladesh and Myanmar. Its source is the inner bark of the tree species called Cinnamomum. The most famous cinnamon tree is the species of Ceylon.

From Exotic Rarity to Kitchen Stable

But unlike today, cinnamon has not been a kitchen stable for the longest time, although it has been known ever since remote antiquity. But back then, because of its enormous prize, cinnamon was regarded as a gift for monarchs or even a deity. The cinnamon traders also kept their cinnamon source a secret for many centuries to guarantee themselves their supply monopoly. This led to many myths about the deriving of cinnamon. In the Middle Ages, there was even a legend stating that people fished up cinnamon in nets at the source of the Nile at the edge of the world.

But the secret of cinnamon had to be revealed at some point, and in the early modern period the western world found out about its true origin. Naturally, the colonizing countries took advantage of it and started exporting the precious spice to other countries in the 17th century. They also began harvesting the cinnamon tree on huge plantations, and those plantations definitely marked the start of its success story.

Nowadays, about 99 percent of cinnamon comes from only four countries: Indonesia, China, Vietnam and Sri Lanka.

How To Make Zimtsterne At Home

After having summed up the origin of cinnamon real quick, let us get to the delicious part. Before handing out the best recipe for those typical German Christmas cookies, we want to stress that, of course, you can also prepare them after Christmas or whichever time of the year you feel like trying them. Making cookies is always a good idea, regardless of time and season!

To make a batch of the cinnamon Christmas cookies, you need the following ingredients:

Start by preheating the oven to 150 C. To prepare the dough, mix the almonds, the powdered sugar and cinnamon. Next, add the egg white and the almond liqueur and whisk it all together using the dough hook of a hand mixer. After this, knead the dough until it is smooth.

Once the dough is done, roll it out in portions on a work surface dusted with powdered sugar to a thickness of about 1 cm. Use a star shaped cookie cutter and cut out the stars. Reuse the leftover dough, knead it and roll it out and repeat until there is no more dough. During the cutting, repeatedly dip the cookie cutter in powdered sugar to avoid dough sticking to it. Place the stars on a baking tray covered with baking paper.

To make the icing, beat the egg white until stiff. Keep beating and gradually add the powdered sugar. Once it forms a smooth mass, brush the stars with it. After this, you are already almost done: Just place the stars in the preheated oven on the lowest shelf and bake for 10-15 minutes. When you remove the stars from the oven, make sure to quickly take them – along with the baking paper – off the tray.

And, you are done! We hope you will enjoy these delicious German Christmas cookies.

If you are looking for a warm, boozy drink to have along with the Zimtsterne, check out our blog post on Glögg!