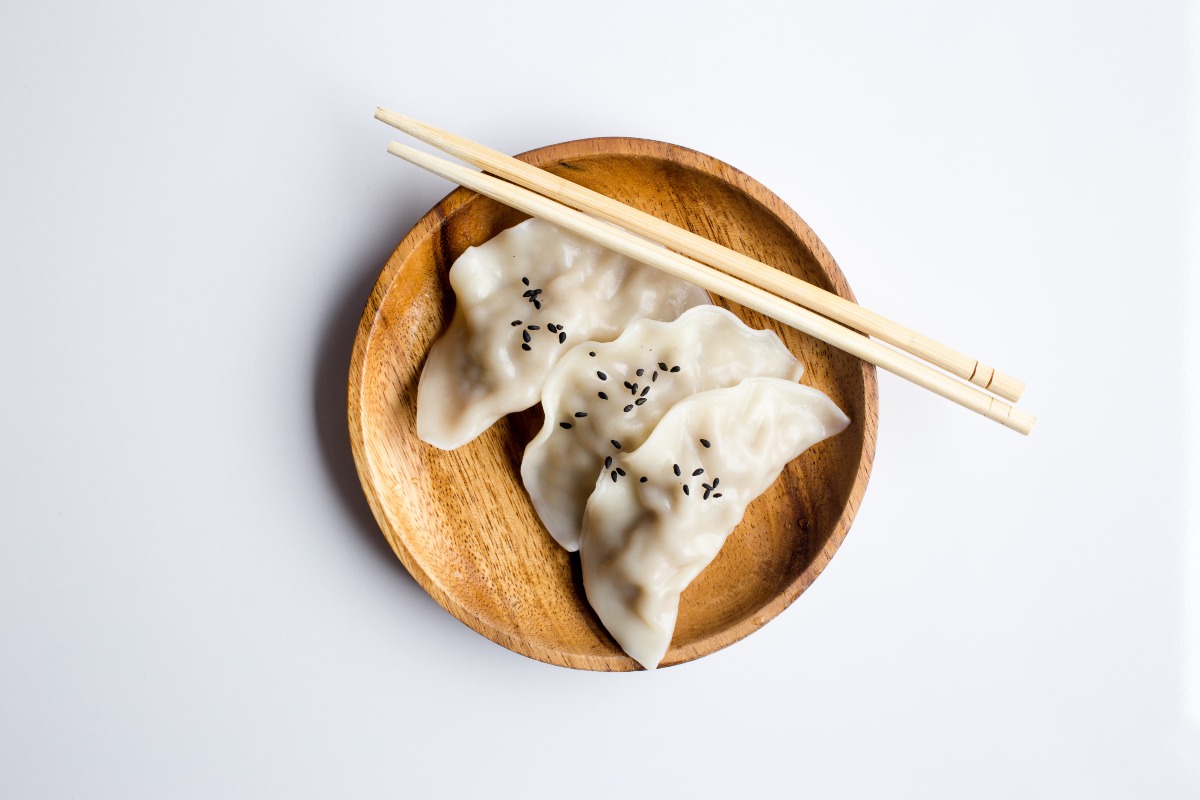 Christmas has passed, which means New Year already awaits around the corner. Maybe, like many others, you still suffer from the endless food of Christmas and can’t even think of yet another table stuffed with heavy dishes. If so, possibly the traditional Chinese New Year dish dumplings might be exactly what you are looking for. Read on to find out more about the Chinese New Year and how wo make this delicious and light festive dish!

To Get Us Started: What Are Dumplings?

Dumplings definitely are one of China’s most traditional dishes. But especially in the most recent years, they have found a huge fan base of dumpling-lovers all around the world.

Although we aim at giving you inspiration for your New Year’s Dinner, we want to stress that for the Chinese Festivities we are about 4 weeks early. The conception of the 31st of December being the last day of the year only accounts to Western countries following the Gregorian calendar. For the Chinese New Year on the other hand, there is no fixed date to celebrate the arrival of another year. The Chinese calendar is a lunisolar one, meaning that the concrete day of the beginning of the Chinese New Year varies annually. The date of the Start of the Chinese New Year in 2022 for example is marked by the 1st of February.

Although it is the Chinese New Year, it is not only celebrated in China. Also, in many other countries of Eastern Asia, like Thailand, Singapore, Indonesia or the Philippines, these festivities traditionally take place.

But especially in China, the New Years celebrations are the annual highlight of the majority of the people. The traditional celebrations also takes up more than two weeks. It is quite common for people from China to save up all of their free days at work to be able to spend at least 2 weeks around that date with their family. Naturally, just like during Thanksgiving in the US, this period is shaped by huge travel movements within the country as everyone wants to spend the time with their families.

Traditions Of The Chinese New Year

There are many, many traditions linked to the time of the Chinese New Year. Some of them promise good luck and prosperity. But there are also quite some actions you should try to avoid during this time, as, at least according to the traditional Chinese belief system, they result in bad luck.

Nevertheless, we will focus on the positive ones and only talk about how to increase your luck in the new year:

One tradition during the New Year’s festivities is, to open doors and windows to allow good luck to enter the house. To light the way to good luck and to hush away bad spirits, it is also quite common to leave the light on at night. And to make space for the good light, it is important to clean the house before the new year starts. Another conception is, that the first day of the year predicts the going of the New Year. For this, many families like to play games on that day. Of course, this is only one little extract of the countless Chinese traditions of that special time of the year.

Dumplings can look back at a history of more than 1,800 years, meaning they have been part of the Chinese kitchen for a pretty long time. And of course, not only during this special time of the year, dumplings are a common food all around China. But consumed during the time of the New Year’s festivities, they stand are said to predict wealth.

Generally, the fillings of dumplings can consist of minced meat and finely chopped vegetables. The filling is wrapped by a thin and elastic dough skin. Although you can fill dumplings with probably every little thing you can think of, there is one ingredient a Chinese would not put inside a dumpling during New Year:

Eating sauerkraut dumplings at that time of the year implies a hard and poor future. Consuming dumplings filled with cabbage and radish on the other hand promises fair skin and a subtle temper. Also, some people put a copper coin in one of the dumplings, the one who eats it is predicted to become rich.

But there is one more tradition we want to share with you: Legend has it the more dumplings you eat during the celebrations, the more money you will make in the Chinese New Year.

To help you honor the very last tradition of the Chinese New Year to eat as many dumplings as you can to provide wealth to yourself, follow the instructions of the following recipe!

How To Make New Year’s Dumplings

To make about 6-7 servings of dumplings, you will need the following ingredients:

For the dough, you will need:

To make the dough, place the flour in a large mixing bowl. Slowly drizzle the water in a steady stream while mixing the mass with your hands or a pair of chopsticks. Once all the water is added, use your hands to knead the dough for about 10 minutes. If there are any dry areas within the dough, sprinkle a little bit of water. Once you are done and have a smooth but elastic consistency, shape the dough into a ball and let it rest for 15 minutes, covered with a tea towel. Then knead again for 3 minutes, making it a ball once again. Then drizzle a bit of oil into the mixing bowl and roll the ball within it. Cover it again with a tea towel and let rest for at least 1 hour, better even overnight.

Preheat a wok or a large cast iron pot over medium heat. Heat some oil and sauté the pak choy shortly until wilted but still green. Make sure not to overcook it and to cook it in batches if needed. Once cooked, remove it from the pan to cool. Add some more oil to the pan and sauté the chopped scallions and garlic about one minute, then add the shitake mushrooms and sauté them about 3-4 minutes. Put them into a large mixing bowl.

As the pak choy should be cold by now, it should be easy for you to squeeze out as much excess water out of it as you can. Once you are done, add the pak choy to the bowl of the mushrooms, along with the squeezed tofu, the tamari, the pepper and mix very well. After this, salt to taste.

How to Fill The Dumplings

To prepare the dough for the folding, cut it into about four smaller portions. Make a roll off each portion and cut off little, gnocchi like pieces, which you roll out to thin circles.

Folding the duplings is no science, but it definitely needs some patience. To make it easier for you and to save us the senseless process of describing it verbally, follow the instructions of this YouTube video:

Finishing Of Your Dumplings

In this recipe we will boil the dumpings, to do so, place a big pot of water on your cooking plate and heat. Once it is boiling, gently place the dumplings inside. Make sure to cook them in portions so that they have enough space. Once the water went back to cooking, let the dumplings cook fo about 2-3 minutes. Test a dumpling to check if they are done, if not, leave to cook a bit longer. Once you are convinced of the consistency, remove them from the boiling water. Mix all the ingredients of the sauce and after this, there is nothing more to be done than to guarantee yourself a year full of luck by eating as many dumplings as you can!

This recipe was taken from SaltNPepperHere. If you are looking for some more New Year’s dinner inspiration, check out our recipe on cheese fondue.