Poutine – The Story and Recipe of the Canadian National Dish 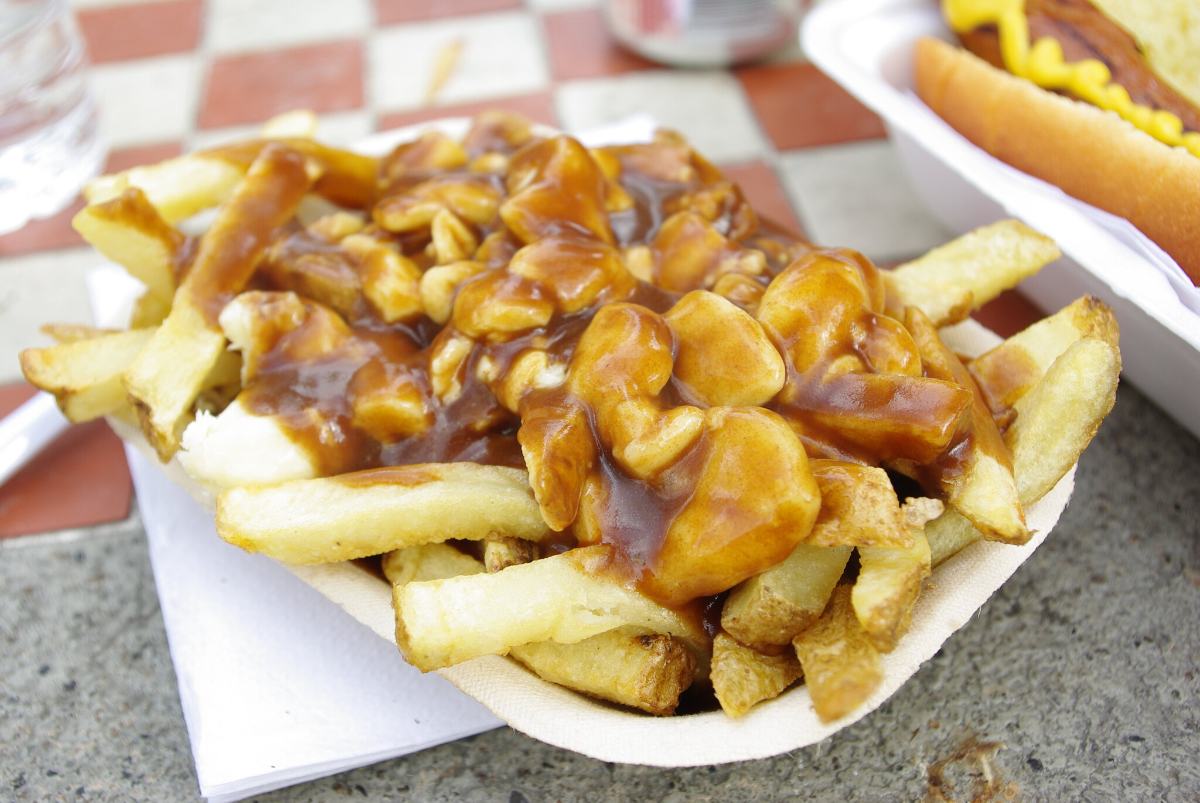 Canada, country of marvelous landscapes, bears, Celine Dion and: Poutine. This savory goodness of fries, cheese and gravy can be described as comfort food in perfection. If you love fries, meaning “if you are human”, the Canadian national dish might just be the right dish to put on your dinner table tonight. Read on to find out more about the history of poutine and to get an easy recipe to prepare it yourself.

Poutine definitely is the most common Canadian dish. At least this is, what I was told by anyone I met, who has ever visited this beautiful country. Of course, because of that, its popularity has already spread. In many bigger cities you can order poutine at burger places or sometimes there are even restaurants or street food stands specialized in making poutine. And there are lots of different poutine combinations now. Most of them simply interpret poutine as fries topped off with different kinds of other foods.

But there of course is one traditional, ‘real’ type of poutine. Normally, it consists of french fries, cheese curds and brown gravy. All of this comes on a plate, so unlike fries, you definitely need a fork to eat poutine.

Québec – The Home of Poutine

Compared to other traditional dishes, Poutine is a pretty young one. Its birthday was probably in the 1950s and its birthplace was the region of Québec. This region is famous for its stunning nature and landscapes, rather than for being really urban. To put this very clear: For a long time, Québec was some kind of backwater area. When the first dishes of Poutine popped up, the Québec people soon came to love it. But outside this rural area, Canadians did not really know about the goodness of poutine, at least up until the 1980s.

This can be explained by one of the main ingredients of poutine, the cheese curbs. Cheese curbs are a typical produce from the region of Québec. They are made from fresh cheddar, which lack durability and should be consumed within two days. Of course, nowadays, it is easier to increase the durability of cheese curbs. But for many years, a good cheese manufacturer would not sell you cheese curb that is older than one day. But modern techniques made it possible to preserve cheese curbs for more than two days. By doing so, there was nothing stopping the triumphal march of poutine. In the 1980s the hype reached Montréal, the biggest city of the region, and from there spread even further.

The Invention Story of Poutine – One of Them

As always, when there is a popular dish, there are many, many different stories on its invention. And, of course, many places claim to be the true home of the dish. The same applies to poutine. Unfortunately, we cannot resume each and every story of the invention of poutine. But at least we will tell the most common one.

Legend has it the first poutine was made and served in the restaurant Le Lutin Qui rit (“The Laughing Goblin”) in Warwick. According to the story, in 1957 a client, Eddy Lainesse, asked the owner of the restaurant to mix his fries with cheese curds. The owner, fernand Lachance, answered: “Ça va faire une maudite poutine!”  – This will be a hell of a mess! The recipe for poutine was born, and the baby was named right away.

But according to an interview with Fernand Lachance from 1990, the recipe for poutine as we know and love it now took some more years to come alive. In 1962, they started adding gravy to poutine in order to keep the fries warm for a longer time.

Finally: The Recipe For Canadian Poutine

Hopefully you succeeded in making you curious about how to make the delicious Canadian national dish. Before getting you started, we want to stress the importance of the right kind of cheese to prepare poutine. The traditional poutine recipe uses cheese curbs, and we have to admit they might be hard to find outside of Canada. Instead, you could also use mozzarella, but not the fresh kind, but the one you could grate and put on top of pizzas.

To prepare 3 servings of poutine, you will need the following ingredients:

For the deep-fried fries:

Start by preparing the Deep-Fried-Fries. Cut the potatoes into 1.5-2 cm thick sticks. Place them in a large bowl and cover completely with cold water. Allow to stand at least one hour or several hours.

Continue with the gravy. In a small bowl, dissolve the cornstarch in the water and set aside. Melt the butter in a large saucepan, add the flour and cook whilst stirring regularly for about 5 minutes until it turns golden brown. Add the chicken and beef broth and bring to boil, stirring with a whisk. Add about one half of the cornstarch mixture, stir, and simmer for about a minute. If you want the gravy to turn out thicker, add more of the cornstarch mixture in small increments until it reaches the consistency you want it to. Season with pepper and add a bit of salt if necessary. Keep it warm until your fries are ready, or rewarm it later.

To make the deep-fried-fries, heat the oil in a deep fryer or a large, wide, heavy cooking pot to 150 C. Remove the potatoes from the water and dry them by placing them onto a sheet of paper towel. Blot to remove as much excess moisture as possible. Then add the fries to the hot oil and cook or about 5-8 minutes until they are starting to cook but are not yet brown. Remove them from the oil and scatter on a wire rack. Increase the temperature to 190 degrees, then, once again, add the potatoes. Leave them to fry until they are golden brown, then put them in a paper towel-lined bowl.

Finally, to prepare the poutine, add the fried potatoes to a large bowl. Season to taste with salt, then add a ladle of hot gravy and toss the fries in it. Add more to mostly coat the fries. After this, add the cheese curbs or mozzarella, toss the mixture and top it off with some freshly ground pepper. And after this, go ahead and enjoy your delicious poutine!

This recipe was taken from seasons and suppers.

If you are looking for a dessert to take after the poutine, check out our blog post about fiadone!