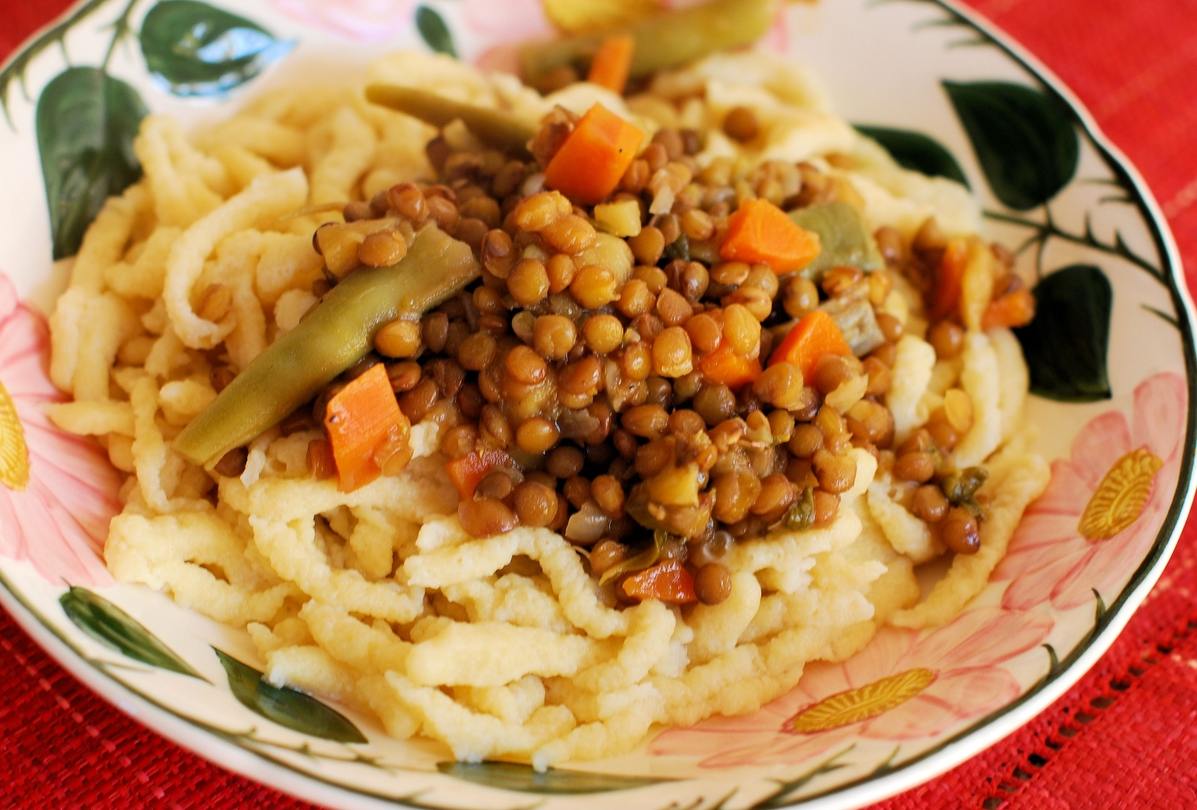 During the last few years, thanks to the vegan community, lentils definitely did experience one hell of a glow up. But unlike some other hyped super foods like chia or açai, lentils have been part of the European diet for thousands of years. The qualities of these little nutritious pulses had made people love them for uncountable years. Especially in the region of Swabia in the south of Germany, lentils are and have been a staple for a long time. The traditional Swabian dish Spätzle mit Linsen, spaetzle with lentils, shows the love of these nutritious protein bombs. Read on to find out more about the history of lentils and how to make the German dish of spaetzle and lentils.

The Origins of Lentils. Or: How Did They Get to Germany?

According to archaeological findings, lentils have been part of the human diet since the Stone Age. In the region of nowadays Swabia, though, people have been consuming and loving it at least for the past 10,000 years.

But lentils are not native to that region. The origins of our favorite pulse can be traced back to the so-called Fertile Crescent. This region encompasses the south of Iraq, the north of Syria, Lebanon, Israel, Palestine and Jordan. But as already mentioned, lentils have been part of the European diet for thousands of years, so how did they get there?

The South of nowadays Germany has not always been inhabited. Around 40,000 BC, people from the Middle East and Africa started moving to and settling in what we now know as Swabia. In several waves, more and more people arrived. And probably brought our beloved lentils along to cultivate them at their new chosen home.

The reason for the enormous popularity of lentils in Swabia mainly results from the local soils. Lentils grow best in a marly or sandy, calcareous and loose loamy soil. Exactly what the Swabian ground offers!

This is why people at that region soon started cultivating them. And because of the high availability of lentils, they quickly became part of the daily diet of the local population. But although loved by the people, lentils never really had a fancy reputation. Even quite the opposite applied: Most of the time lentils were seen as some kind of peasants food.

But although the Swabian soils offer perfect conditions for lentils to grow, the cultivation became unprofitable. Because of low crops, around 1960, the cultivation of lentils in Germany had declined to almost zero. The lentils on most Swabian tables now come from Turkey, Spain, Canada and the US. But, as an attempt to keep up the millenia-old tradition of lentil cultivation in Swabia, first experiments with planting it have popped up during the last few years.

There is one essential reason, besides their delicious taste of course, why lentils are especially popular among vegans. They are real protein bombs. Lentils carry around 45 to 65 percent as much protein as meat. They contain many minerals such as copper, phosphorus, zinc, magnesium, iron and B vitamins. Additionally, they carry folic acid, a nutrient which is immensely important for blood and cell formation. Lentils also include a lot of fiber, which is essential to keep your gut healthy and happy. And, as we all know: Happy gut, happy immune system!

To finish up this song of praise on lentils, one more fact: Grain and lentil protein complement each other perfectly. This means, if you combine lentils with some kind of grains, you create an extraordinary good acid pattern that can totally keep up with the one of animal protein.

After all that information, we hope to have raised your curiosity. And hopefully, you feel like trying the typical Swabian dish of spaetzle and lentils. If so, read on to find out more!

How To Make Spaetzle With Lentils

To make about 4 servings of this traditional Swabian dish you need the following ingredients:

Some hours before you plan on actually starting to cook, put the lentils in plenty of water and let them soak for at least two hours. You can skip that step, but soaked lentils are better digestible.

After this, drain the soaked lentils, put them in a big pot along with the vegetable stock and the bay leave and bring to boil. Once boiling, reduce the heat and leave to simmer at medium heat for about 20 minutes. Meanwhile, clean and finely dice the soup vegetables. Add them to the lentils and leave to simmer for another 10 minutes. The cooking time actually depends on the lentils and the cooking time, so better test your lentils a few time whilst cooking them.

Peel and finely cut the onion. Sauté it along with the butter in a separate big pot until translucent. Add the flour, stir well until slightly brown, then deglaze it with a bit of the lentil broth. Keep cooking it on low temperature until the liquid has reduced a bit. Next, add the lentils along with the remaining liquid. Season with the wine, vinegar, salt and pepper to taste.

Finally, put your fresh spaetzle on plates and arrange the lentils on top. And finally, enjoy your protein-loaded typical Swabian dish!