Spaghetti Carbonara – The Real Story and Recipe Of The Italian Classic 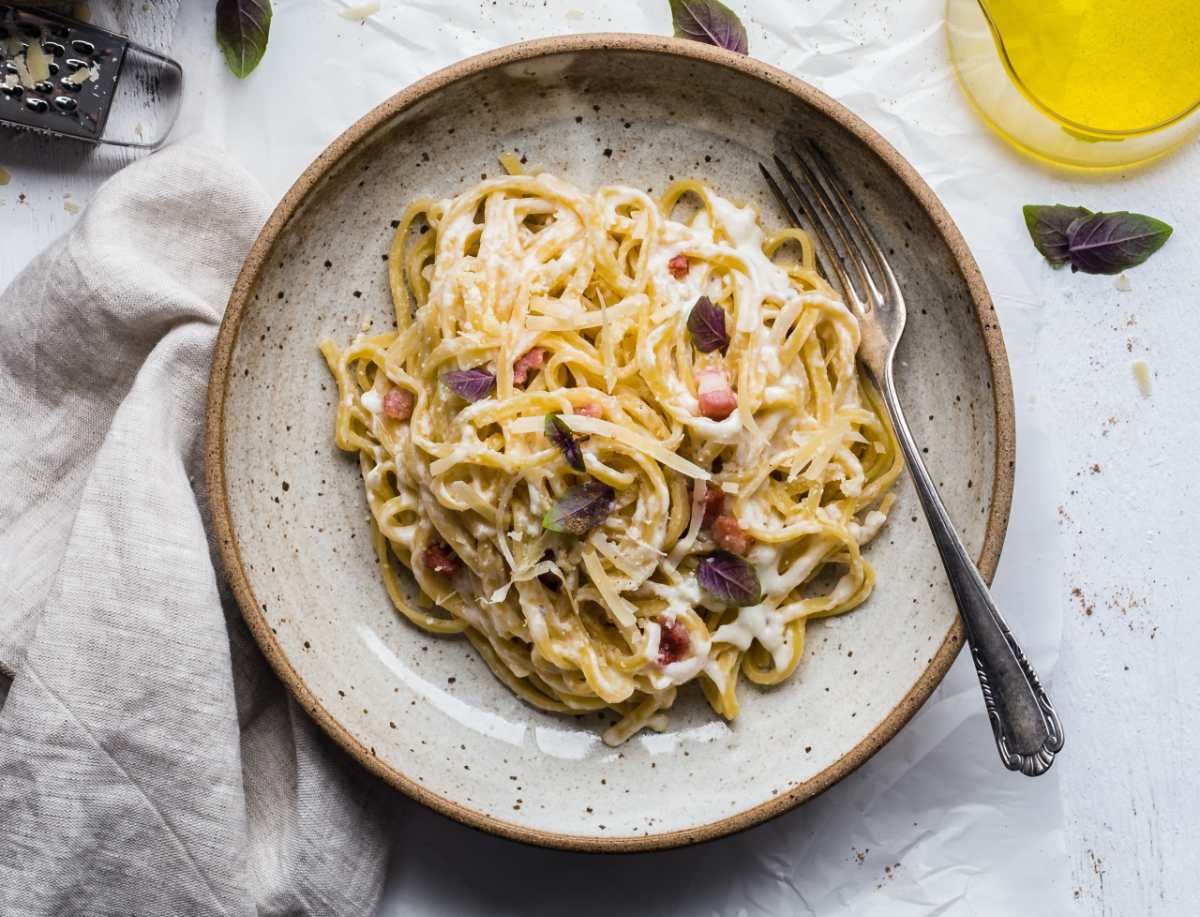 Spaghetti Carbonara probably is one of the most famous pasta dishes connected to Italy. But although nowadays, most people see it as some kind of Italian classic, the real origin, within Italy or even internationally, is debatable. There are many differing stories on how this famous dish was invented. And of course, many regions claim to be the home of Carbonara. In this blog post, we take a closer look at the real origin of Spaghetti Carbonara and hand out an easy recipe to make it yourself.

This Italian classic can be best described as a rich pasta dish made of Italian ham, egg, pepper and cheese from the Italian region of Latium. Instead of spaghetti it is also common to use fettuccine, rigatoni, linguine or bucatini.

The name of this dish derives from the Italian term carbonaro which means charcoal burner. This leads us to the first of many legends on the origin of Carbonara:

Because of its name, a popular legend on the origin of this Italian dish names the charcoal burners of the Appennines, a mountain range in the north of Italy. According to the story, those men were the first to cook what we now know as Carbonara. During their breaks, they would simply throw their provision, consisting of ham and graded cheese, together with some pasta. By doing so, legend has it, the popular dish of Carbonara was created.

But as always, this romanticized version just seems too easy to be true. Today, it is commonly agreed on the unlikelihood of this story. But of course, there are more legends on the ‘real’ origin of Spaghetti Carbonara.

Another very popular belief on the origin of Carbonara roots in a historical cookbook. In Il cuoco glanta, a cookbook by the Neapolitan chef Vincenzo Corrado from 1773 a, you could say ‘distant relative’ of Carbonara is described. Also, fellow Neapolitan chef Ippolito Cavalcanti describes something alike. But actually, both only describe a technique to use egg as a thickener for pasta cooked in broth. How this can seriously be named as a possible indicator of Naples being the real home of Spaghetti Carbonara, we don’t know…

So: It probably were not charcoal burners, who invented this Italian classic. Neither two Neapolitan chefs from the 18th century. Who else send themselves in the running for being the real home of Carbonara?

Rome – The ‘Real’ Home of Carbonara?

There is another contestant claiming to be the come of Carbonara. Or at least the place from where the dish spread and became famous. It is Rome. And this is actually the most probable story of all.

The most agreed on story of the origin of Carbonara took place in the final year of the Second World War. And to be the honest, one part of Carbonara is actually owed to the American allies. You could say, Carbonara combines the best of Italy and the US.

Carbonara really is as a mixture of the typical American inclination for eggs and bacon along with the Italian go to of pasta with cheese. Most probably it was a young chef of Bolognese origin, Renato Gualandi, who invented the Carbonara – more or less accidentally. In September 1944 he prepared a lunch for a meeting between an English and an American division in a newly liberated region of Italy. To serve them something special, he just put together what he found in the American provision. Out of bacon, cream, cheese and powdered egg yolk he created the first Carbonara. Off course, the divisions who ate the first ever Carbonara, were more than elated and loved the dish.

Later on, Gualandi became the cook of the allied troops in Rome. Of course, he kept making his popular dish. And from Rome, the Carbonara is said to have spread to other parts of Italy and the world.

How to Make Real Spaghetti Carbonara

Having finished on all the historical part, let’s get to the most exciting part and find out how to make real spaghetti Carbonara.

Two prepare about 4 servings of Carbonara, you will need the following ingredients:

Firstly, put a large saucepan of water on to boil. Finely chop the 100g of pancetta after having removed any rind. Finely grate the pecorino and Parmesan and mix them together. Next, beat the eggs in a bowl and season with a little bit of the freshly grated pepper.

Add 1 tablespoon of salt to the boiling water and add the spaghetti. Once the water has come back to cook, turn the heat down a bit. Cover the pot and cook at a constant simmer for about 10 minutes, or until the pasta is al dente.

While the spaghetti is cooking, quash the garlic with the blade of a knife to bruise it. Put the butter into a large frying pan, heat it and as soon as the butter has melted, add the pancetta along with the garlic. Leave to cook for about 5 minutes while stirring it often. When the pancetta is golden and crisp, take out the garlic. Keep the temperature of the pancetta on low and add the pasta using a fork or tongs. It’s fine if a bit of the water enters the pan. Also, do not throw the pasta water away yet. Mix most of the cheese in with the eggs, keeping a bit back to garnish later.

Take the pan of spaghetti and pancetta off the heat and quickly pour in eggs and cheese. Mix it all very well using forks or thongs. You want the egg to thicken but not scramble, and everything to be covered in sauce. Add several tablespoons of pasta cooking water to keep it all very saucy. Season with a bit of salt if needed.

After this, only three things left to do: Put the Carbonara on your plates, garnish with the remaining cheese and some grated pepper and of course, enjoy your real spaghetti Carbonara!

This recipe was taken from BBC good food.

If you are looking for a nice dessert to have after your Carbonara, check out our blog post on Fiadone!