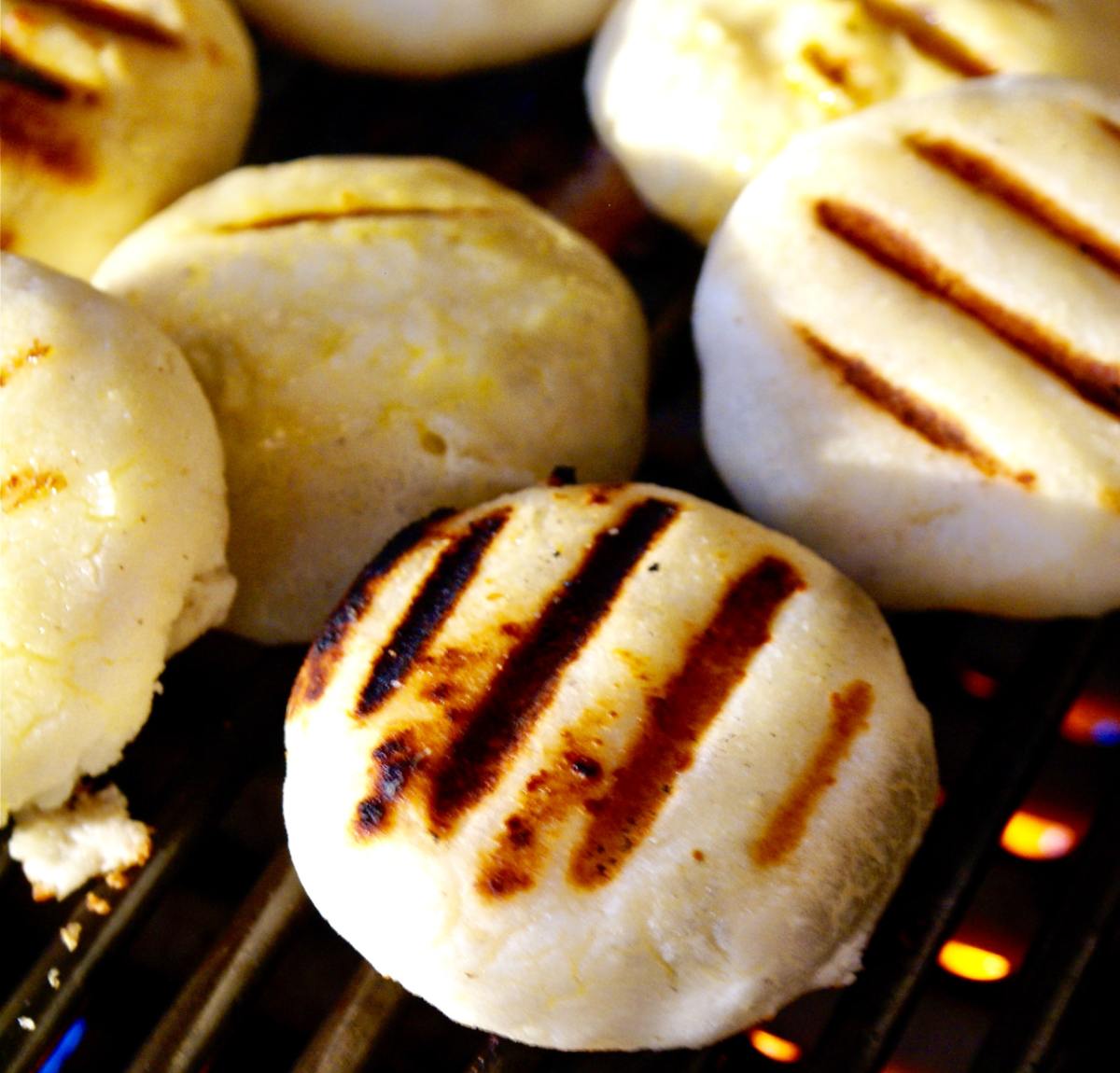 Speaking of traditional foods from countries south of the USA, many people probably just think of nachos, guacamole and burritos, meaning Mexican food. But of course, there are millions of delicious regional foods from the countries of South America. Like Arepas, the Colombian bread like maize patty. Arepas are and have been loved by the people from that regions for many, many years, and they are definitely a staple in the everyday diet of the majority of Colombians. Read on to find out more about the traditional Colombian cuisine, the origins of Arepas and how to make them yourself!

This typical Colombian food can be best describes as some kind of bread-like patty. But instead of wheat flour, it consists of ground maize. For Colombians, Arepas form part of their daily diet and are popular as a kind of bread alternative. And besides Colombia, Arepas also are a popular food in the Venezuelan cuisine or other South American countries like Bolivia.

The main ingredient of Arepas is maize meal or maize flour. There is a special way to prepare the flour: Before grinding the maize, you have to precook it. Many Colombian families have a grinding machine at home to prepare the flour themselves, but of course, there is no need for you to buy a special machine as you can also buy Arepa flour in supermarkets. Except of the maize flour, Arepas also contain water and salt, occasionally also oil, butter, eggs or milk. The preparation of Arepas is actually really easy. The ingredients are simply mixed to form a dough and subsequently grilled, fried or baked.

In Colombia, you will find Arepas stuffed with all kinds of different fillings. People put meat inside, as well as beans and vegetables, cheese or eggs. But there are also breakfast Arepas with butter or even sweet spreads like jam or Nutella on top. You see, in the matter of how to eat an Arepa, there are no creative limits!

Colombia, like many former Spanish Colonies, of course was deeply influenced by the Spanish cuisine. Resulting from this, many Colombian dishes have a Spanish touch. Nevertheless, the food in Colombia also reflects the people’s love for their land, its different kinds of Ethnic groups and its harvests depending on the regional vegetation. And of course, as the geographic location of Colombia differs immensely from the Spanish, there are thousands of other ingredients connected to the equatorial flora and fauna of Colombia. Every region has their very own kinds of foods and dishes and celebrates the variety of ingredients of their very specific place.

Also, naturally, the Spanish were not the first humans to ever set food on the South American grounds. Just like all around America, even before the Spanish arriving, there were people living on the American continent. The origin of Arepas, a dish well known and loved all around Colombia, can be traced back to the Native Americans who used to be the only ones populating nowadays Colombia.

The Native American Background of Arepas

The origin of the Colombian evergreen, Arepas, goes back way in time. The first ones to make some Arepa resembling food were the Native Americans inhabiting nowadays Colombia. To make some kind of flatbread, they collected corn and masticated them in their mouth to get a pulp-like dough.

Later, the technique of making the dough changed. Instead of chewing the corn, the Native Americans used two flat stones to grind the corn and get some kind of flour. From this powder they made a dough, formed balls and roasted them in a bent plate of clay, the aripo. This device is said to also have named the popular maize food of Colombia and its surrounding countries.

The International Success Story of Arepas

But nowadays, the love of Arepas is not only limited to South American countries. Colombian emigrants, backpackers and travelers spread the craze about those delicious patties and visiting a bigger city, it is not that unlikely to stumble upon a food truck selling them.

And honestly, Arepas make it really easy to fall in love with them. They are easy to prepare, offer endless variations, keep you satisfied for a long time and most importantly: They are really delicious. So now it is time for us to find out, how to make the Colombian superstar, Arepas, yourself!

How To Make Traditional Columbian Arepas

The recipe to make this delicious Colombian food is actually very simple. However, feel absolutely free to go crazy on the filling of your Arepas! You can go the traditional way and put beans and/or beef, plantains and cheese inside, or make vegetarian or even vegan Arepas. Just be creative and go for what you like most – there are no rules!

To make 8 Arepas, you will need the following ingredients:

Stir the water and salt together in a bowl. Then, gradually, add the corn meal into the water, mixing it with your fingers until you get a soft, moist and malleable texture. Next, divide the dough into 8 golf ball-sized balls and form each into an about 2 cm thick patty.

After this, heat the oil in a frying pan over medium heat until shimmering. Cook the corn patties in the hot oil, working in batches, about 4-5 minutes on each side or until golden brown. Transfer the cooked Arepas to a paper towel-lined plate to drain until they are cool enough to be filled.

Finally, cut your Arepas horizontally halfway through to form a pita like pocket. Stuff it with whatever you like and of course, enjoy!

This recipe was taken from allrecipes.

If you are looking for a Mexican all-time classic to put into your Arepas, check out our blog post about guacamole.