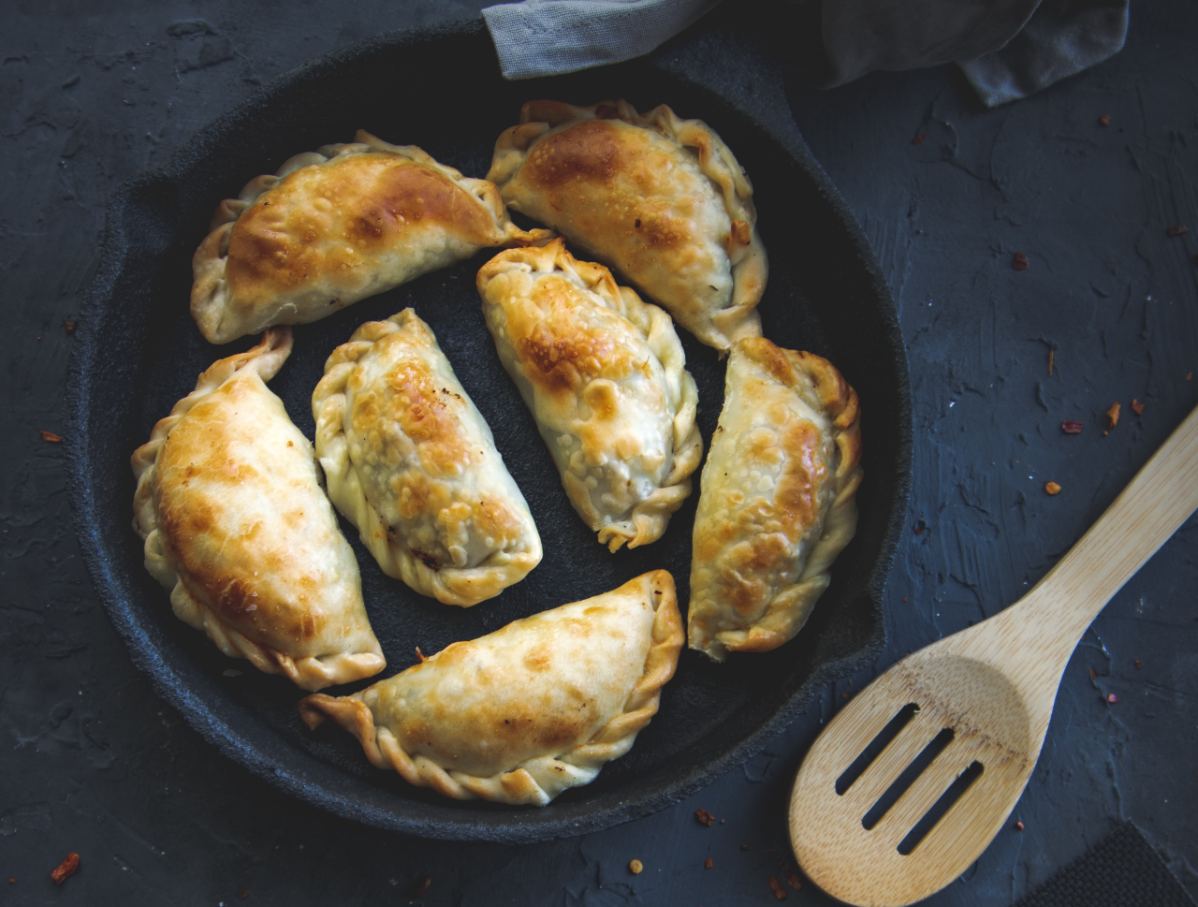 Empanadas definitely are one of the most typical foods from Argentina. Travelling through this beautiful country, you will find them at any place. The delicious dough pockets filled with different stuffings are sold on the street as well as in restaurants. And empanadas form a big part of the Argentine national pride. Asking an Argentine about empanadas, for sure their eyes will start sparkling! In this blog post, we talk about the history of those delicious salty pastries and hand out a recipe for vegetarian empanadas.

Looking at the translation of the Spanish word empanada, you already get a hint about what they actually are. Empanada comes from the verb empanar, which means “to wrap/coat in bread or dough”. And an empanada is a pastry filled with savory ingredients. A typical Argentine empanada is shaped like a half-moon or triangle and can be either baked (Salta-style) or fried (Tucuman-Style).

In meat loving Argentina, empanadas are often filled with minced beef, chicken or ham and cheese. However, of course there are also vegetarian empanadas, they are just not as popular. If you go to an empanada restaurant, you will definitely find endless option. Also, most regions have their very own empanada version.

The History of Empanadas

The first mention of empanadas goes 500 years back in time. In a Catalan cookbook from 1520, published by Ruperto de Nola, historians found an empanada resembling recipe. And as Argentina used to be a Spanish colony, the Spanish origin of the Argentine national food is anything but a surprise.

Most probably, Spanish immigrants took the recipe along with them to Argentina during the 16th century. At that time, the traditional diet of the Spanish consisted of bread, legumes and different types of meat. The empanadas embodied all of those ingredients.

In Argentina, empanadas got more and more popular and spread all around the country. Depending on what kind of meat or vegetables were available in the different regions at that time, different kinds of empanadas popped up. Today’s availability of all kinds of foods almost all year long blurred the regional limits of different versions, but still, there are different kinds of local empanada recipes.

As already said, nowadays, you will find all kinds and variations of empanadas wherever you go. But still, there are different kinds of regional styles all around the different provinces of Argentina:

There is for example the empanada Tucumana from the Tucuman Province. They have three different empanada varieties: beef, mondongo which are tripes and chicken. This province really seems to be crazy about empanadas, as it is the host of the annual National Empanada Festival. So if you happen to be around that province at that time, considers a visit to that festival obligatory.

To give out some more examples, there is also the empanada Cordobesa from Córdoba. They are rather sweet, as they are made with white sugar and raisins, but also contain beef, potatoes and olives. In Patagonia, the most common filling is lamb, whereas you can even find llamas in the empanadas from Jujuy.

This list could go on and on, but let’s get to the exciting part and find out, how to make Argentine empanadas yourself.

How To Make Veggie Argentine Empanadas

For this blog post we chose a vegetarian version of the Argentine evergreen so that actually everyone can make it. If you feel like adding any kind of meat you can easily adjust the recipe or look online for meaty fillings. The dough works for whichever filling!

To make about 12 Argentine empanadas, you will need the following ingredients:

For the egg wash: 1 large egg and 1 tablespoon water

Start by preparing the dough. Put the flour and salt in a large bowl and mix it together. Add the butter and mix until the mixture resembles fine bread crumbs. You can also put it into a food processor and pulse a few times. In a small bowl, mix together the egg, water and vinegar. Add it to the flour mixture and knead until it forms a ball. Cover the dough with a plastic wrap and put into the fridge to chill for at least one hour.

Meanwhile, head over to the filling. Heat olive oil in a large pan over medium-heat. Sauté the onion and bell pepper for about 4 minutes, then add garlic and mushrooms. Keep sautéing for 5 more minutes until the mushrooms ae tender and all the liquid has gone, then add the spices. Cook one more minute while stirring it, then remove the pan from heat and set it aside.

Preheat the oven to 200 C. For the egg wash, whisk together the egg and water. Line 2 baking trays with parchment paper. Remove the dough from the fridge and leave it to rest 5 more minutes at room temperature.

Lightly flour a surface. Roll out your dough to a role and cut it into 12 equal pieces. Form each piece into a ball, then use a rolling pin and roll them into about 4 mm thick circles. Place one heaping tablespoon of the vegetable mixture of one part of each circle. Then fold the dough over to make a half-circle and close the edges. If you want, crimp them with a fork. Or use the typical Argentine closing manner like described in this video:

Place the empanadas on the baking trays. Brush the side on top with egg wash and bake for 10 minutes. Then remove the tray from the oven, turn over the empanadas and brush the other side with the egg wash. Bake for 5 more minutes or until lightly brown on both sides. Before serving and enjoying your Argentine empanadas, leave to cool for about 10 minutes!

This recipe was taken from collecting memories US.

Are you curious about more regional South American specialties? Check out our post about Colombian arepas.