Tiramisu – The Legends Of Its Origin and A Foolproof Recipe 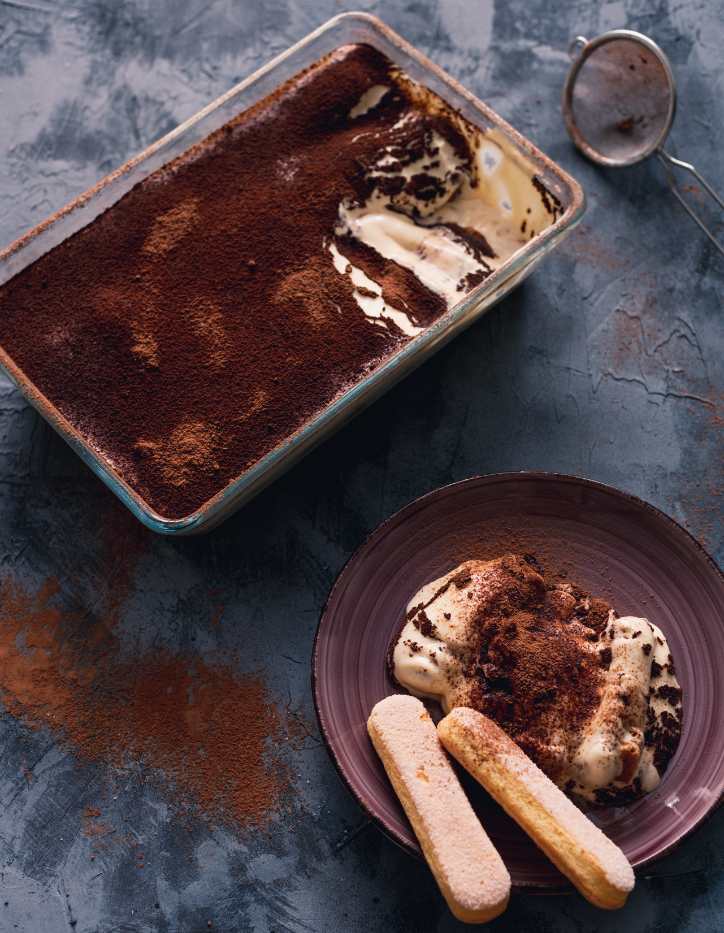 For many, Tiramisu is the incarnation of the perfect dessert. Creamy, juicy, with a taste of coffee and a touch of liqueur. Coming from Italy, this delicious sweet food hast conquered the world and has become popular among many countries. But who actually invented it? In this blog post, we will take a look at some of its original histories – yes, there is more than one – and hand out a foolproof Tiramisu recipe.

What Exactly is Tiramisu?

As already mentioned, Tiramisu is a coffee-flavored dessert. The coffee flavor comes from ladyfingers, which are dipped in coffee. Other ingredients are sugar, mascarpone cheese and a mixture of whipped eggs. It comes in layers and on top you mostly find a fine coating of cocoa.

The name Tiramisu means “pick me up” or “cheer me up”. And the meaning of this dessert’s name inspired most legends centering around its origin. One of them claims that it was a guest in the trattoria Al Vetturino in Pieris who enthusiastically shouted “Ottimo, c’ha tirato su” – “Excellent, that really picked me up” – when trying a Tiramisu-like dessert.

Some legends connect the meaning of Tiramisu, a sort of “pick-me up”, to some quite delicate histories. There is one story linking it to the city of Treviso. Reputedly, it was the Siora, the woman who ran a brothel in the city center, who created the first Tiramisu recipe. And she used it as some kind of aphrodisiac, as its rich ingredients were said to strengthen the customers at the end of the evening. She would give the sweet dessert to the customers before they were leaving her establishment. Like this, they would leave the place reinvigorated. And their wives, waiting for them at home, would not get suspicious.

But this is not the only story that labels Tiramisu as some kind of old school Viagra. There is also one legend pointing towards the Tuscan city of Siena. At the end of the 17th century a Tiramisu-like dish, Zuppa del Duca, “the duke’s soup”, popped up. It was created in honor of the grand duke Cosimo III ‘de Medici. And its popularity did not only result from its great taste, but also from its enhancement of the male potency. In this case, too, the naming Tiramisu is kind of self-explaining.

Tiramisu – The “Cheer-Me-Up” for Soldiers at the Front

Another legend links the invention and origin of Tiramisu to the First World War. According to this story, the Italian wives prepared it for their husbands when they were about to leave to fight at the front. Once again, its caloric ingredients were said to strengthen the men and to help them get through the fighting. Additionally, this dish was also given to children and to elder people for them to grow strong and regain their forces. You could say, Tiramisu served as some kind of nutritional food. Later, after the war, it reputedly was developed into a sweet dessert and turned into what we now know and love.

The first time Tiramisu was officially mentioned on a menu was in 1969 in the restaurant Albergo Roma in Tolmezzo. The owners however claimed to having served this creamy dessert since 1951.

Additionally, to the cities mentioned in this article, there are many more who allegedly invented the first ever Tiramisu recipe. And naturally, many regions have their very own way of making Tiramisu. However, the real inventor of this typical Italian dessert will probably never be distinguished. So let’s just thank the Italian in general for having created this delicious dish and find out, how to make it ourselves!

The Tiramisu recipe of this blog post will not contain any alcohol. But as already said, there are a lot of regional Tiramisu recipes and many define themselves by using adding a special kind of liqueur like Amaretto or brandy. If you feel like, you can always add a sprinkle of it to the mascarpone cheese cream.

To make about 8 servings of Tiramisu, you will need the following ingredients:

First, add the egg and the sugar to a big bowl and beat together until frothy. Then add the mascarpone and the cream and beat until thickened. Depending on your own preferences you can choose what texture pleases you best, some like it thicker, some creamier.

Pour the coffee in a wide soup plate which allows you to easily dip and turn the cookies. Dip the cookies into the coffee one by one, making sure to simply turn it quickly and remove it again, so that the ladyfingers don’t get soggy. Use an about 20×14 cm baking dish and place the cookies one by one inside right after having dipped them into the coffee. Once the bottom is covered with soaked lady fingers, put 1/3 of the filling on top. Then repeat the layering two more times. Refrigerate the Tiramisu at least for 3 hours, or even better overnight. Before serving, sprinkle with unsweetened cocoa powder. And finally, enjoy your delicious homemade Tiramisu!

This recipe was taken from An Italian In My Kitchen.

If you are looking for more Italian recipes, check out our blog post on Pasta Alla Zucca.