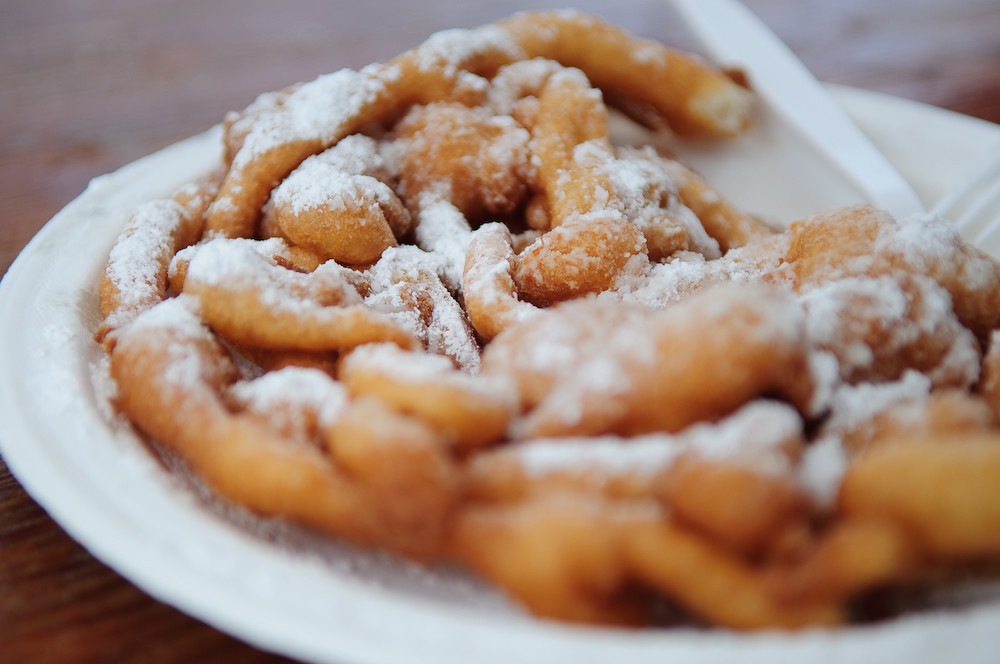 If you have ever been to a typical American fun fair, you probably have stumbled across funnel cake. This fried sin belongs to amusement parks like rollercoasters, loud music and cotton candy! Although nowadays, funnel cake is easy to get all around the states, its origin leads to one state in particular. If you want to find out more about the history of funnel cake and how to make this delicious dessert yourself, read on!

What Is Funnel Cake?

Funnel cake is a sweet, fried food, mainly popular in Northern America. It is made by pouring batter into hot cooking oil in a circular pattern and deep-frying it until golden. The name comes from the device used to pour the batter: A funnel. Traditionally a funnel cake goes with nothing but powdered sugar, but of course nowadays there are several toppings you can put add, like jam or jelly, cinnamon, chocolate, fresh fruits or whipped cream.

And as already mentioned, this fried cake is a classic treat served at carnivals and amusement parks. This tradition goes back more than 60 years, as it was started by one fun fair back in 1952. But first things first: Where does the funnel cake come from?

The Origin of Funnel Cakes

The first ones to make a funnel cake resembling dessert were probably the Persians and Arabs. Back in the days, they made Zalabiyeh, yeast-risen dishes, probably also fried in hot oil. Later, these little cakes spread to Europe. In the Medieval Ages, similar fritters were made by pouring a yeast or sourdough batter through a bowl with a small hole cut in the bottom. They were seasoned with salt and syrup, unlike today, when funnel cakes are mostly just sweet.

The sweet fried cakes became especially popular among German people, who created the predecessor of funnel cakes, Drechderkuchen. And with the first people immigrating from Germany to America, called the Pennsylvania Dutch, of course Drechderkuchen went along to their new home. But still, Dreckderkuchen was not an everyday dish. Instead, the Pennsylvanian Dutch only made them occasionally as a winter holiday treat.

The Breakthrough of Funnel Cakes

But, in 1952, these crispy cakes conquered the American mainstream. In that year, the Kutztown Folk Festival took place for the first time. A group of professors who wanted to start a Pennsylvania Dutch Folklore Center created the festival to raise funds. Holding the festival, they hoped to promote national interest in the Pennsylvania Dutch culture. And they definitely achieved their goal! The festival was a huge success and thousands of people came to learn more about this specific culture and enjoy the festival attractions.

Reputedly, this was the first fun fair ever where funnel cake was sold. Legend has it, a woman named Grace Merkel Henninger made the cakes along with two girlfriends to feed the hungry festival guests. Also, it was Grace who provided the recipe. During the festival, the women worked in the back of a concession stand, deep-frying the cakes and selling them for only 25 cents each. Of course, the cakes were a huge success, meaning thousands of went over the counter. And from that time forward, funnel cakes became a trademark dessert at that fair.

Of course, this tasty cake was quickly copied by other fun fair organizers and thus, spread all around North America. Today, the thought of walking around a fun fair or amusement park in the US without at least one funnel cake stand seems more than odd. If you have never tasted them and are curious about their taste, or if you are simply addicted to funnel cakes, read on to find out how to make them at home!

How To make Funnel Cake

To make about 20 funnel cakes, you will need the following ingredients:

First, pour enough oil into a large saucepan to come halfway up on the sides. It should at least be about 7 cm deep. Heat the oil until it reaches 170-180C. If you do not have a thermometer, drop a chunk of bread into the oil: It is hot enough when the bread browns in about 30 seconds.

While you let the oil heat up, whisk together the flour, icing sugar, baking powder, milk, eggs and add a good pinch of salt. Transfer the batter to a disposable piping bag and secure the end with a peg. Make sure to have a second peg at hand for the other end, once you have cut it open.

When the oil is hot, snip off the end of the piping bag to make an opening about 1 cm wide. Pinch it closed until you are ready. Hold the piping bag over the oil, release your finger and drizzle the batter in a swirly circle shape. Pinch the opening to close t, then repeat about two more times or as many fit into your pan at one time. Secure the piping bag with the other peg whilst the cakes cook. Let them cook about 1 minute on each side or until they are golden and crisp, then remove from the oil and drain on kitchen paper. The last step is to simply dust them in icing sugar and, of course, to enjoy them as long as they are still warm!

This recipe was taken from BBCgoodfood.com.

If you want to ind out more about traditional American desserts, check out our blog post on pumpkin pie.