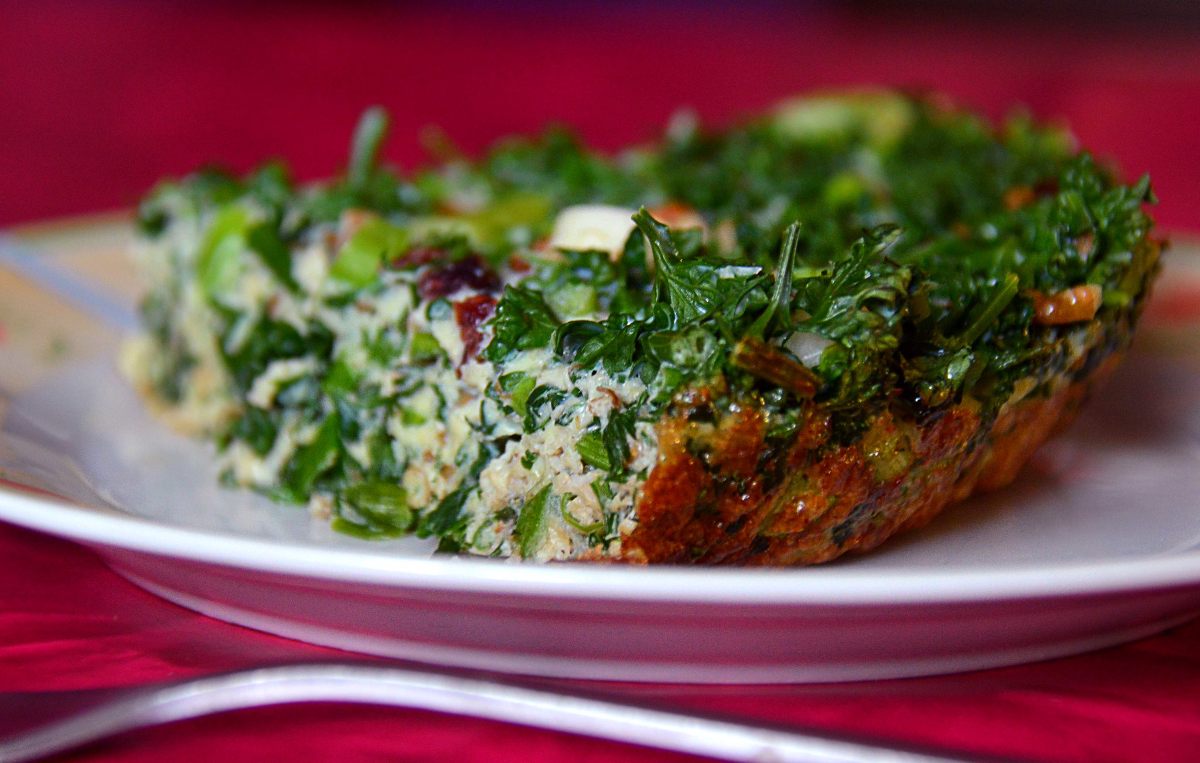 In the western culture, New Year is connected to the first of January according to the Gregorian Calendar. But in other countries and different societies, there are different dates to start a new year. There is for example the Chinese New Year, which is celebrated for two weeks straight. And there is the Persian New Year. The Persian New Year begins either the 19th, 20th or 21st of March and is an important date in many countries like Iran, Azerbaijan, Afghanistan, Kazakhstan and Kirghistan. And one typical dish to serve during this period is Kookoo Sabzi, a kind of herbs omelette. Read this article to find out more about the Persian New Year and how to make Kookoo Sabzi.

What is Kookoo Sabzi?

This traditional Iranian dish resembles the French Quiche, the Italian frittata or an open-faced omelette. But at the same time, it is absolutely different. Its base is eggs and, even more importantly, herbs. It cooks for a short amount of time over low heat from both sides and is served either cold or hot as a starter, side dish or main course. Kookoo Sabzi is often accompanied by bread and yogurt and/or salad.

As already mentioned, this dish is a typical food to eat during the Persian New Year’s Day. But why does it take place in March, and what’s the history of these celebrations?

The Persian New Year, or Nowruz in Persian, begins on the spring equinox, which marks the beginning of spring. It can occur as early as 19th of March or as late as the 21st, which is why there is no fixed date to celebrate Nowruz. And this special day is celebrated worldwide by various ethnolinguistic groups.

Its origins lay in the Iranian religion of Zoroastrianism. This religion is based on the teachings of the old prophet Zoroaster and is one of the world’s oldest and continuously-practiced organized faiths.

Coming from the region of today’s Iran, the Nowruz has spread to many other countries of that region. This is why, since 2010, the day is officially recognized by the United Nations as “international Day of Nowruz”. It is also classified as UNESCO Intangible Cultural Heritage.

Like everywhere else, there are many customs connected to the celebrations of the New Year in these countries. To name a few, it is for example very important to clean the house before Nowruz and to buy new clothes, to salute the new year looking as neat as possible. Also, you traditionally go and pay short visits to your family, friends and neighbors and have pastries, cookies and other snacks together.

Of course, there are countless different dishes, that people traditionally eat during Nowruz. One of them is Kookoo Sabzi. We will get to this typical Nowruz dish in a minute, but beforehand, one little legend on the origin of the Iranian New Year.

The Story Of King Jamshed

As always, there are thousands and thousands of different stories connected to the origin of Nowruz. One of those legends tells the story of the beloved Persian King Jamshed.

Legend has it, during his reign, the Persian empire was blooming. People were happy, healthy and wealthy, the country was as secure as never before, no poverty, everything was just fine. Except for one thing: The climate was extremely unfriendly. It was freezing cold, which caused the death of people and animals and also limited the agricultural options of the region.

This is why the people came to the King and begged him, to do something about it. And the thoughtfull ruler had an idea: He built a throne made of precious gems, of gold and jewels. Once it was finished, he put on his shiny crown, sat down on the throne and conjured demons to have him raised up high into the sky. Up there, the king and his throne shone bright like a sun and changed the climate to the better.

His people of course could not be happier. They claimed this day Nowruz, which literally means “new day”.

According to the legend, this is how the first Nowruz was celebrated. And up until today, around the 20th of March, people still have big festivities. And make the traditional New Year’s omelette Kookoo Sabzi.

How To Make Kookoo Sabzi

Having talked a bit about the Iranian New Year Nowruz, let’s find out how to make the traditional dish connected to this special day.

To make about 8 pieces of Kookoo Sabzi, you will need the following ingredients:

First, soak the barberries in water, cover them and leave for ten minutes, then drain.

Pulse the fresh herbs together in a food processor, until they are finely chopped but not mushy. Put them into a large bowl and add the barberries, walnuts, garlic, salt, all the spices and salt and pepper. Stir it to combine, then add the eggs. Again, mix very well until you get a consistency of thick yogurt or soft ice cream. If it is too thick, add another egg.

Heat the 1/3 of olive oil in a large nonstick frying pan over medium heat. Add the batter and spread it evenly. Cover it with a lit and leave to cook until it starts to bubble along the sides. This should take about 3 minutes. Then reduce the heat even more and leave to cook until the bottom is browned, about 12 to 15 minutes, with the cover on.

Cut the omelette evenly into 4 large pieces and use a wide spatula to flip each piece over. Drizzle the remaining olive oil in between the cuts and again leave to cook abut 10 minutes until the other side is browned, leaving the cover off.

After this, you only have to cut it into desired pieces and serve it warm or cold. A typical side with it would be a yogurt dip and salad and bread.

If you want to know more about traditional New Year’s food, read our article about dumplings!

The recipe of this article was taken from allrecipes.