Korean Street Food: Most Popular Dishes and Their Recipes 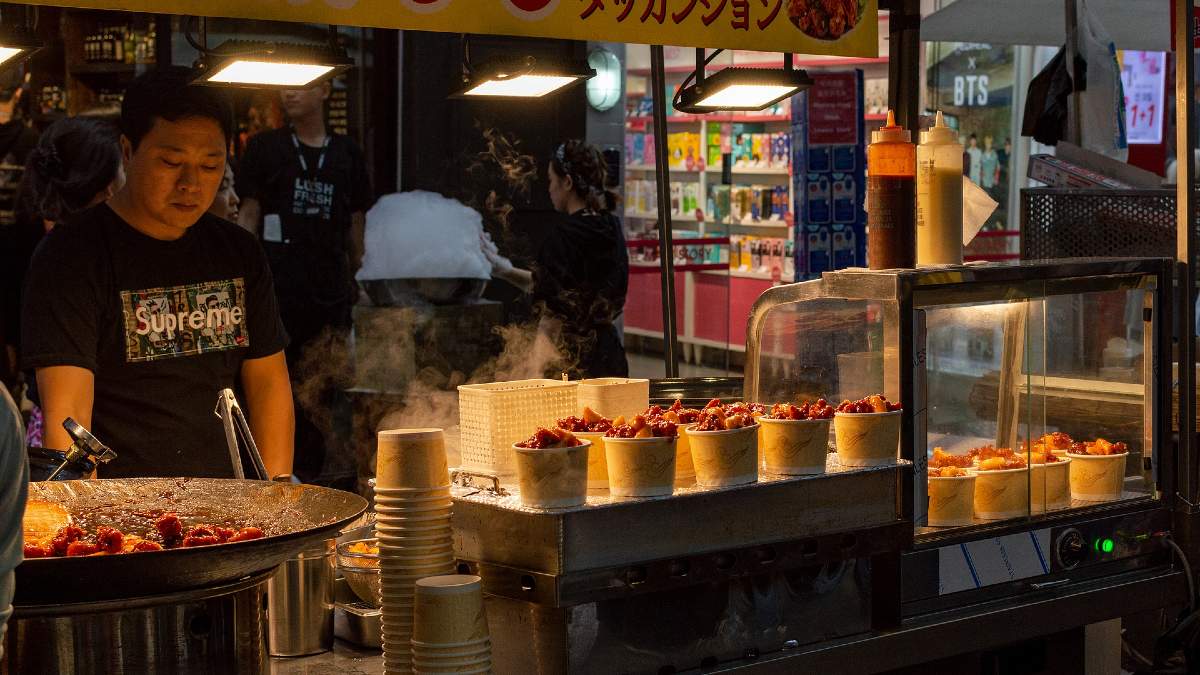 What is Street Food…

Before exploring the world of Korean street food, let’s talk about street food in general. Some people might have never had the chance to experience it while others grew up in environments where seeing vendors selling food in public places was common. Either way, it is safe to assume that most people have heard of the term “street food” at least once in their lives. Essentially, street food is defined as ready-to-eat food (or beverages) that is sold outside in streets or public places.

Other than just being absolutely delicious and loved by tourists, it has many other benefits. Oftentimes, street food is a very affordable way to obtain a more-or-less nutritious meal, making food more accessible to people with lesser means. It can also help support small businesses and farmers and is a good way to eat locally. We love the variety of food we can find in food trucks, as well as the quality and freshness of the products. Seeing the chef cook the food right in front of you is also a big bonus that enhances the whole experience. Not to mention we love the convenience of it, especially considering how fast-paced our daily lives can be.

Although the concept of street food has been growing in popularity in western countries over the past few years, it has been a tradition in other regions of the world for decades. So before getting into the tasty part and telling you about some famous Korean street food dishes, let’s talk a little bit about the origins and history of street food.

Rumor has it that the oldest traces of street food we can find go all the way back to Greece, around ten thousand years ago. The Greeks cooked and sold fried fish on the streets. This tradition then traveled to the Roman world and followed us all the way into 2022. But street food as we know it today finds its roots in Asia where it has been a tradition for decades now and Korea is no exception to that. Now, let’s dive into the history of Korean street food and its most popular dishes.

In Korea, the first few street vendors set up their stands around the year 1300, during the Joseon Dynasty. This tradition especially increased in popularity after the Korean war ended in 1953. Refugees and American soldiers seemed to appreciate these humble dishes in a time when resources were limited.

To say that street food is common in South Korea would be an understatement. Street food represents a major part of the South Korean culinary culture. No matter what neighborhood you find yourself in, you will most likely find at least one pojangmacha (포장마차).

What is a pojangmacha? If you already know a little bit about South Korea, or even just watch K-dramas, I guarantee you that you have already seen it at least once. We could compare it to a food truck, although sometimes it looks more like a tent. Usually owned by elderly people, you will find them near university campuses and subway stations. Apparently, there are around 3000 pojangmachas in Seoul only, which goes to show how popular this tradition still is to this day.

Now that we have covered the basics, let’s discover some of the most popular street food dishes in Korea, and how to recreate them.

What is Gyeran-ppang? Well, if you look at the etymology of the word, Gyeran (계란) means egg whereas Ppang (빵) means bread. We love egg bread for its simplicity and nutritious aspect.

It is oblong in shape and essentially resembles a muffin with an egg on top. They also come with a variety of additionnal toppings such as cheese and sunflower seeds. Either way, they are delicious, and fairly easy to recreate at home. Perhaps even the easiest out of this entire list, especially if you follow this recipe by Maangchi.

Eomuks are essentially fish cakes. They are made of ground white fish mixed with flour. We usually cut the fish into long and thin rectangular shapes and thread them onto skewers before cooking them in broth. Fish cakes have their origins in Japan, as they were introduced to Korea when the country was under Japanese Rule. This is also the reason why they are sometimes called Odeng (오뎅), influenced by the way Japanese term “Oden”. However, it is recommended to use the Korean term “Eomuk” to refer to Korean fish cakes. As you will find out later, Eomuk is not the only dish on this list that was influenced by Japan.

If you are a seafood enthusiast, I would recommend trying out this recipe.

This adorable fish-shaped pastry reminds me of a waffle. The traditional bungeoppang is stuffed with sweet red bean paste. Nowadays, there is many other fillings available such as chocolate or custard. More of a dessert, bungeoppang is one of the most popular Korean street food.

This street food snack is the second Japan-influenced snack on this list. This fish-shaped pastry might have reminded you of the similar Japanese pastry, taiyaki. Bungeoppang was introduced to Korea by Japan in the 1930s, and this famous snack has stuck around to this day. The difference we can notice between the two is that the Korean bungeo-ppang is carp-shaped whereas the Japanese taiyaki is sea bream-shaped.

If you want to recreate this adorable fish-shaped pastry, I highly recommend this recipe.

Let’s first look at the etymology of the word. Dak (닭) means chicken, whereas Gangjeong (강정) is a type of traditional Korean confectionery that consists of rice flour, honey, and seeds. Essentially, we could describe dakgangjeong as fried chicken that is cut into bite-sized pieces, covered in a delicious and sticky sweet and sour sauce. It can sometimes get a little spicy too!

Find out how to make this tasty meal by following this step-by-step tutorial by Maangchi, here.

I would describe Hotteok (호떡) as a Korean pancake. It is traditionally stuffed with sugar and cinnamon, making it a delicious street food snack or dessert. Nowadays, you can find different types of Hotteok, such as matcha-flavored, or stuffed with peanuts, sunflower seeds, or even vegetables.

Hotteok is a dessert that you can find especially in Korea and China. This dessert that has now become an essential part of the Korean street food culture actually traveled to Korea when Chinese merchants landed on the Peninsula in the 1880s. Later, Korea modified the recipe to make it their own.

If you want to know more about Korean street food, check out our blog about Tteokbokki.