What is Poke Bowl? Origins of This Dish and How To Make It 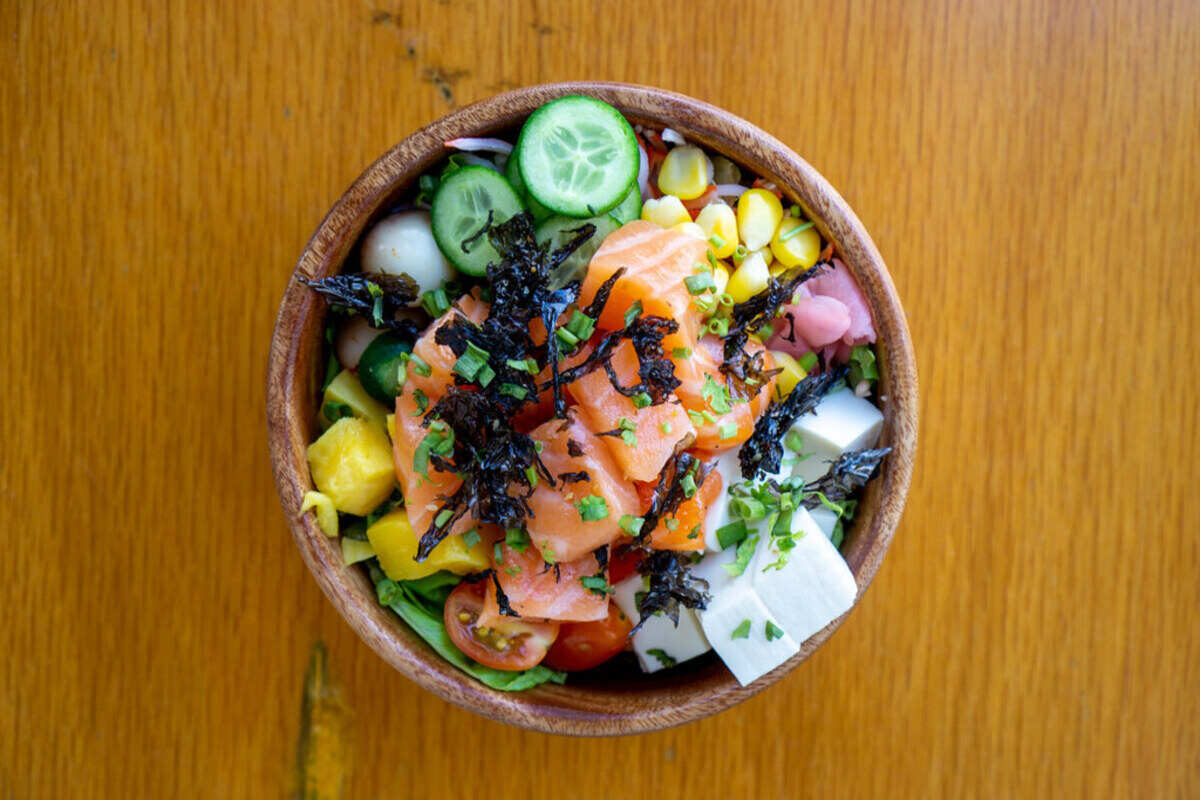 We’ve all seen pictures of this colorful and aesthetically pleasing bowl on Instagram at some point in the last few years. But do you know where it comes from, or why it became such a trend? Read to know more about the famous Hawaiian dish that is Poke Bowl.

Origins of the Poke Bowl

In case you were wondering (as I was when I first heard about it), the correct way to pronounce Poke is “poh-kay”. This now trendy dish has its origins in Hawaii where Poke means “chunk” in the local language. Originally, fishers in Hawaii would eviscerate freshly caught fish, especially tuna, and remove the fish bones before chunking the fish. Then, they would eat it raw, only adding some seaweed and nuts, creating the traditional poke.

If you have never heard of poke before but think it looks familiar, there’s a reason why! It actually looks pretty similar to the Japanese chirashi bowl, the Peruvian ceviche, or even the Buddha Bowl. Let’s look at those similarities.

Similarities with other dishes

Poke and chirashi are similar in the sense that both are composed of rice that is topped with different ingredients, the main one being fish. However, there are a few notable differences. First of all, chirashi is a Japanese dish. To put it simply, we could compare it to a sushi bowl. In a poke bowl, we only use one kind of fish, typically salmon on tuna, cut in the shape of a cube. Whereas in the Japanese chirashi, we use many different types of fish and they are usually rectangular in shape. Another difference is that poke is usually topped with a sauce of some sort, whereas chirashi is not – even though you would always find soy sauce nearby.

Another dish poke is often compared to is ceviche. Although both are seafood dishes, I would argue that they are quite different. Ceviche is composed of raw fish as well but uses minimal ingredients for the dressing. The fish is usually marinated in lime or lemon juice. However, both are dishes that you can especially enjoy during the summer!

Although we are still unsure about the origins of the Buddha Bowl, it was apparently named that way due to the shape of the bowl which resembles the belly of the Buddha status. The poke bowl and buddha bowl are both healthy dishes, but the main difference between the two of them is that the buddha bowl is vegetarian or vegan by its nature. However, you can definitely make your poke bowl vegetarian or vegan as well. Keep reading to find out how!

Now that we’ve talked about some of the similarities that the poke bowl shares with other dishes, let’s discuss its benefits, and trust me, there are many.

Poke is a very healthy lunch option – or breakfast, or dinner, you choose! We could argue that the healthy aspect of this dish is what made it a trend to begin with. As people are getting more aware of what they eat and more interested in the notion of “eating clean”, it’s no surprise that poke grabbed people’s attention. Not only is it aesthetically pleasing, but it also brings a whole lot of nutrients into your body! Raw fish and avocado give you a good amount of omega 3, healthy fats, and protein. Seaweed, fruits, and whatever vegetables you decide to customize your bowl contains a lot of fiber. Additionally, you can make it even more healthy by choosing brown rice instead of white rice!

What is in a Poke Bowl?

I would like to argue that there are as many answers to this question as there are ideas. One of the major benefits of poke is how customizable it is! Here are a few poke bowl ideas.

What is ahi tuna? Well, in Hawaiian, “Ahi” refers to two species of tuna: yellowfin tuna and bigeye tuna. Those are found in tropical and subtropical oceans. Ahi tuna is perfect for making sashimi or sushi. Considering this, it’s also the perfect raw fish to add to your poke bowl!

While the rice is being cooked, dice the raw fish and cucumber after peeling it and removing the seeds. Peel the onion and dice it.

Mix soy sauce with sesame oil and grated ginger in a bowl. Add the raw tuna, cucumber, and onion. Mix it all together and keep it in the fridge.

Peel and stone the avocado, then slice it.

Once the rice is cooked, drain it and put it into a bowl. Add all the ingredients previously prepared on top of the rice and sprinkle some sesame seeds.

This poke is my personal favorite. Salmon is known to have many benefits. For example, it is known as being a good source of protein. If you’re a skincare enthusiast, you’ll be delighted to know that the omega 3 found in salmon is also good for glowy skin!

Mix the lime juice, honey, ginger, soy sauce, and some sesame seeds in a bowl. Add the salmon cubes and add them to the sauce, mixing it well. Then, put it to the side in order to prepare the vegetables.

Mince the red cabbage. Sice the carrot. Peel the avocado and slice it as well.

Finally, once the rice is cooked, drain it and put it into a bowl. Add all the ingredients on top of the rice and bon appétit!

If you don’t like fish but want to try poke, we got you! With how easy to customize this dish is, you can easily replace fish with meat. I would recommend adding chicken to keep the poke bowl as healthy as possible. To make it even tastier, I usually add a teriyaki sauce.

Meanwhile, in a bowl, mix the cornstarch with 2 tablespoons of water.

In the same pan, add the mixture of cornstarch and water you prepared earlier. Stir until the sauce starts to thicken. When it does, turn off the stove and keep the pan on the side for later.

Dice the chicken breasts. Cook them in a pan with the teriyaki sauce.

Once both the rice and chicken are done, start preparing your vegetables.

Once all ingredients are prepared, put the rice in a bowl and add the grated carrots, baby spinach, bean sprouts, and teriyaki chicken on top of it.

If you’re vegan, you can replace the fish or meat with any protein of your choice. Often, you’ll find tofu makes a very good meat substitute. Other options include edamame, tempeh, or chickpeas. I like to also sprinkle some chia seeds on top of it.

Dice the tofu and put it in a bowl with a tablespoon of soy sauce.

Peel and slice both the cucumber and avocado.

Once the rice is cooked, drain it and mix it with some of the tofu marinade you prepared earlier. Put it into a bowl.

Add the avocado, cucumber, and tofu on top of the rice.

Add a tablespoon of greek yogurt.

Want to learn more about Hawaiian food? Check out this page!