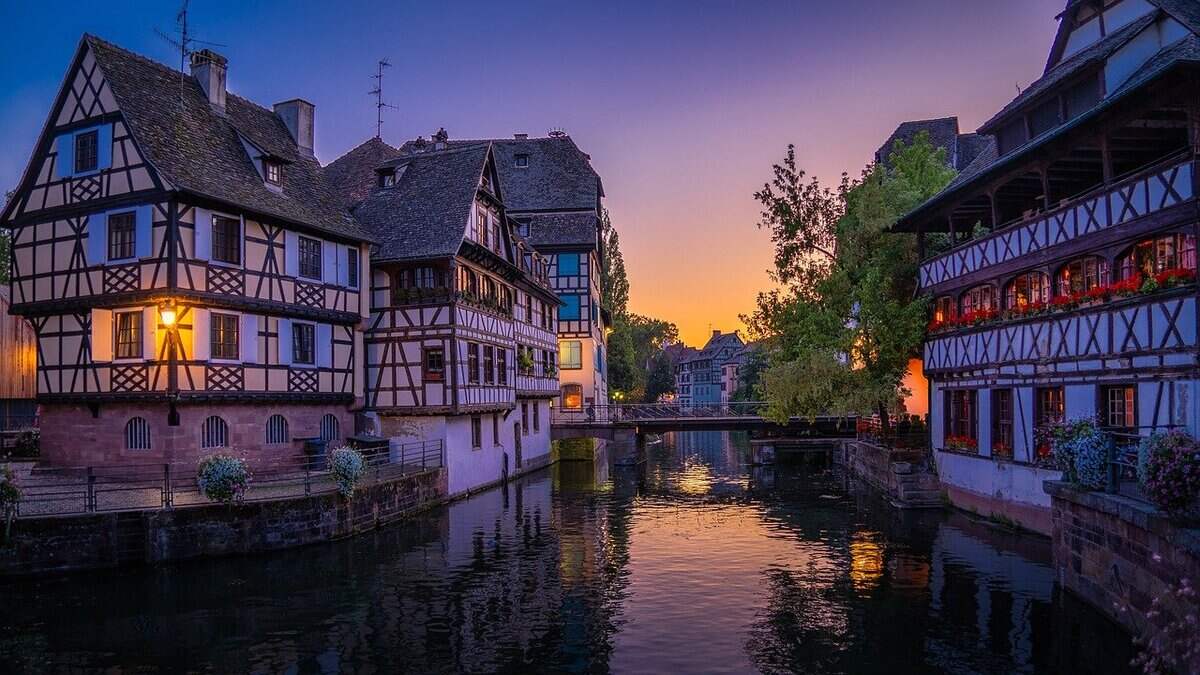 Are you planning to visit France and more specifically Alsace? Do you want to know more about the local Alsatian food? Luckily for you, we prepared a list of the top 5 traditional Alsatian dishes you should try during your stay in the beautiful city of Strasbourg.

I think it is safe to assume that French cuisine plays a major role in the reason why so many people visit France each year. In 2019, almost 90,000,000 tourists visited France. Some of the dishes commonly associated with France are snails, frog legs, or even macarons. And although these are tasty dishes, the average French person would not eat them on a daily basis. Moreover, each region of France has its own traditional dishes that are just as tasty as the popular ones!

What is Alsatian Food and Where Does It Come From?

If you’ve never heard of Strasbourg or Alsace, you might be wondering what it is or where it is located. Alsace, we could say, is a sub-region of the Grand Est region of France. Alsace is located in the North East of France and has the city of Strasbourg as its capital. Strasbourg is also the prefecture of the Grand Est region, and the official seat of the European Parliament! It is also a border town, located next to the Rhine River, with Germany on the opposite bank of the river.

Speaking of Germany, if you are somewhat familiar with German food, you will notice that Alsatian food specialties share some similarities with German dishes. This can be explained by the complex history of Strasbourg regarding Germany, and the city’s proximity to it.

Let’s begin with one of the most popular Alsatian dishes: the Choucroute garnie. We could look at it as the Alsatian sauerkraut. The main difference is that the Alsatian choucroute is usually cooked in wine. However, you might be surprised to hear that the choucroute has its origins in no other than China! Rumor has it that the workers at the Great Wall of China discovered that cabbage could be kept fresh for a very long time once pickled in brine. As they were working in the middle of the mountains and access to food was limited, this was a good ingredient to keep the workers well nourished. The Huns later traveled all the way to Bavaria and Austria, landing in Alsace in 451, and brought the concept of fermented cabbage with them.

But what does “garnie” mean? Well, choucroute on its own is simply fermented cabbage. Choucroute garnie is a choucroute that is dressed with either salted meat or fish. Meat lovers will enjoy the Strasbourg or Montbéliard sausages served with it, as well as other cuts of pork. If you prefer fish, the most popular seafood ingredients that are used for making the fish-based choucroute are salmon, haddock, and halibut. Pair it with a glass of Riesling or Sylvaner wine to enhance the experience.

If you want to learn how to make choucroute, I would recommend this recipe.

Baeckeoffe is an Alsatian dish that was inspired by another dish called Hamin. Hamin was eaten by many Alsatian-Jewish families. Alsatian families of other faiths then adopted this recipe and it gradually got popularized all over Alsace. But what is it made of? Well, Baeckeoffe is a dish that is made of potatoes, vegetables, and meat (usually lamb, beef, and pork) marinated in white wine and spices. Traditionally, people would give it to the local bakers for them to let it simmer in their oven overnight. Nowadays, just like the Choucroute garnie, people sometimes change the traditional recipe to their liking by replacing meat with fish for example.

If you’re intrigued by this dish, try it out yourself!

If you like pretzels and sandwiches, you can’t miss out on the famous Mauricette! Mauricette (sometimes written Moricette, also referred to as Malicette) is a small salty bread from Alsace. It is made of the same dough as Pretzel. The name Mauricette is actually the trademark of this sandwich-like bread, which was created by Paul Poulaillon, a famous Alsatian baker, in 1973. To put it simply, Mauricette is just like a Pretzel, without the shape of a Pretzel. You can fill it with many different ingredients such as ham, salmon, and tuna… It is the ideal lunch option if you’re planning to eat on the go but still want to enjoy an Alsatian specialty!

Let’s talk about my personal favorite Alsatian food which is Tarte Flambée, also called Flammekueche. And contrary to popular belief, no, it is not really a pizza, even though it looks like it. In fact, the term “Tarte flambée” literally means “flamed tart”. Flammekueche is a traditional Alsatian dish that you can also find in the regions of Baden-Württemberg and Rheinland-Pfalz in Germany. The base of the tarte flambée is really what sets it apart from the traditional pizza in my opinion. The dough is rolled very thin and does not rise. It is actually a very simple dish that requires only a few ingredients such as crème fraîche (similar to sour cream), onions, and bacon. You can, of course, find Tarte flambées with different toppings, but the traditional one is excellent as it is.

Follow this step-by-step guide to create the perfect tarte flambée.

Spätzle (can also be written Spaetzle) could be thought of as Alsatian pasta. However, the true origins of spätzle are debatable. Some sources will say that they come from Germany, while others mention Italy, Switzerland, Austria, and of course, Alsace. But no matter where they originated, they are especially loved by Alsatian people who consider it as a traditional Alsatian dish. Why is it called Spätzle? Well, Spätzle means “sparrow” in English. The pasta was named that way because once cooked and on your plate, it supposedly resembles a sparrow nest. Although it can sometimes be eaten on its own, it is usually paired with something else, as a side dish.

If you want to make homemade spätzle, look at this tutorial from FoodWishes.

If you want to learn more about Alsatian and German food, check out our blog about Pretzel.