Cocktail: Mai Tai! What is it and the history behind it 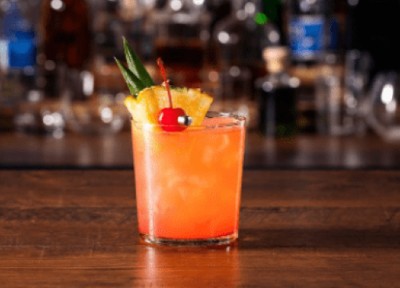 The Mai Tai cocktail is drink made of rum, Curacao liqueur, orgeat syrup and lime.

Curacao liqueur consists of the dried peel of the bitter orange Laraha that you can find on the Dutch island named Curacao. (It is unknown who first produced this liqueur and when).

The orgeat syrup is a sweet syrup made of almonds, sugar, and rose water (water made by steeping rose petals in water). It has a strong almond flavor and bartenders across the world use it in many cocktails. It is a vital ingredient for making Mai Tai and most of the Tiki drinks. An interesting fact about almond syrups is that they were used to be made by bitter almonds. However, bitter almonds have a substance, called cyanide, that is dangerous to humans in large quantities. For this reason, syrups that contain almonds are now made using sweet almonds

The origin history of the curacao liqueur is quite interesting. It is unknown who created the liqueur first and what was the date of the creation. A company named Bols claimed that Lucas Bols (1652–1719) is the first to create a laraha-based liqueur. This happened after the discovery that an aromatic oil could be extracted from the peel of the bitter oranges. Bols then had this oil exported back to Amsterdam to produce a liqueur similar to current day Curaçao. Nowadays there are many Curaçao liqueur forms, but the most common are the orange-hued dry Curaçao and blue Curaçao, which has a bright blue colour.

In Tunisia and Libya, there is a variant of the orgeat syrup with the name of rozata. They serve it in weddings and engagement parties as a symbol of joy and purity because of its white colour. In Cyprus and on the Greek islands of Chios and Nisyros, there is a similar syrup with the name soumada. Soumada has a very ancient history, especially in Cyprus, that goes back into the Roman period.

All in all, the MAI TAI cocktail is a cocktail that consists of a mixture of a variety of flavors including rum, a citrus fruit called Laraha (or Curacao orange), almond syrup, and even the rose plant. Thus, the drink that is produced from this variety of elements is giving birth to an exotic and tropical taste that combines the fusion of many different cultures

The birthplace of the MAI TAI cocktail is not Thailand, as the second word TAI can be misleading and as a result people often assume that the cocktail was first produced in Thailand. Mai Tai is often associated with Hawaii and the Caribbean countries even though it is invented in the US, California.

Nevertheless, as I mentioned this drink seems to make its first appearance in Victor J. Bergeron’s restaurant in 1944, Trader Vic’s, in Oakland, California, US. Victor J. Bergeron claims that he is the one who invented the cocktail. However, this restaurant’s previous owner Donn Beach underscores that he was the one who made it first in 1933 since he is supporting that the cocktail was based on the Q.B. Cooler cocktail (A cocktail based on many rums, orange juice, and syrups). In conclusion, even though the two men have slightly different recipes for the cocktail, many people believe that despite the differences in the ingredients, they taste quite similar.

Interesting facts about the cocktail

Like most cocktails, Mai Tai, is easy to make. Just follow the steps right below (or adjusted to your preferences)

For more details on how to make this alternation of Mai Tai, I suggest that you click here

Of course, by the time you decide to make this cocktail, all the ingredients might not be available at the time. The good thing about Mai Tai is that we can change the ingredients easily. For example, lime juice or lime might not be available. I prefer to use peach juice instead of lime in order to make it more sweet and less sour (a variation called PEACHY MAI TAI). So anyone would be able to improvise and add their personal preference in the drink.

However, it is vital that the orgeat syrup(Mai Tai’s signature)existed in this cocktail mix. It is easy to find it online or in some supermarkets. It is, also, considered quite cheap regarding its frequency of usage. All in all, there is no equivalent replacement for its unique flavor. The cocktail might still be good, but it won’t be MAI TAI.