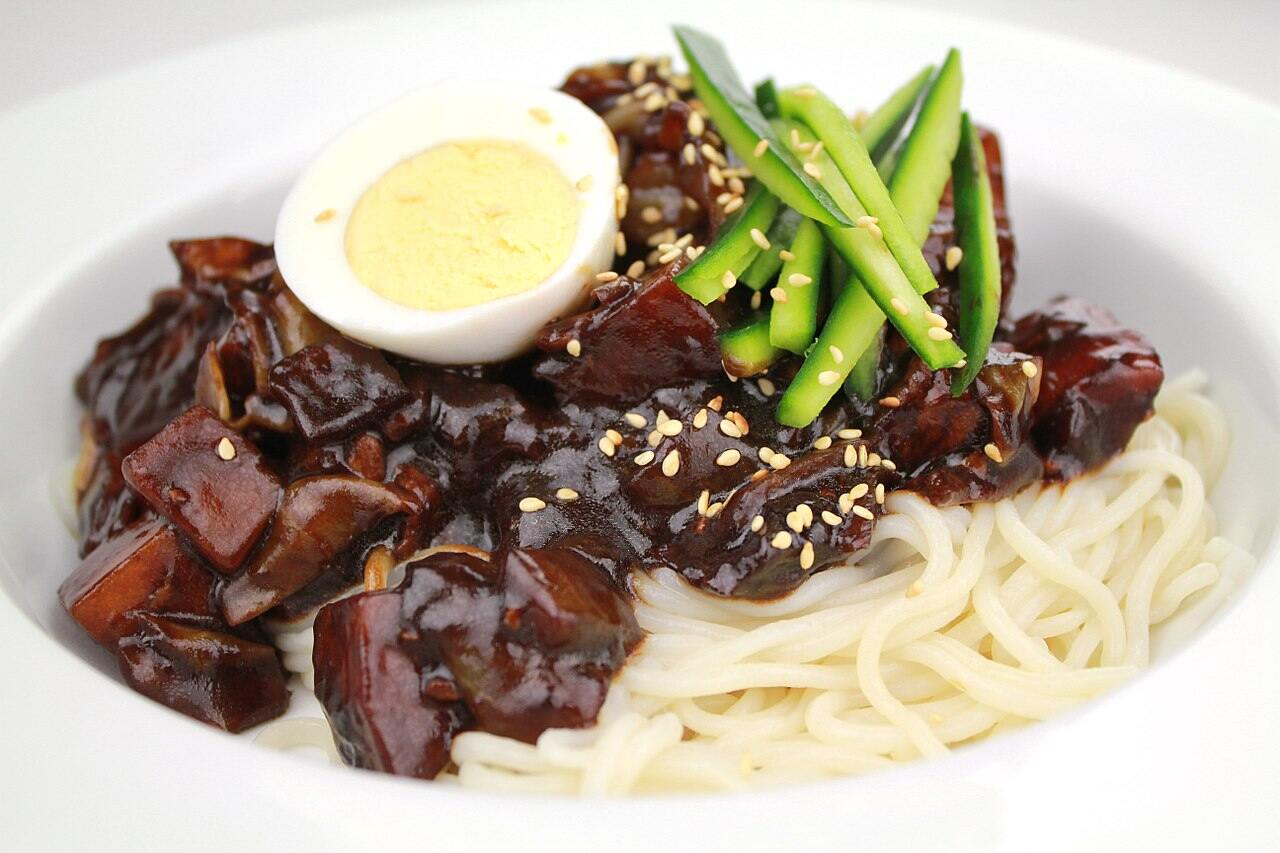 As you have probably noticed yourself, Korean cuisine has continuously been growing in popularity worldwide. A lot of Korean food has now become well-known to the average person, such as bibimbap, kimchi, or ramyeon. But one particularly tasty dish that is often forgotten is Jjajangmyeon. Keep reading if you want to know more about this delicious Korean specialty.

What is Jjajangmyeon (짜장면)?

Jjajangmyeon is a very popular Korean dish, made with noodles and a black bean sauce topped with diced pork and different sorts of vegetables. This special sauce, made with the black bean paste called “Chunjang” in Korean, is what makes this dish so delicious. What makes this dish even better… is its price. Indeed, this dish is pretty cheap, ranging between 3,000 and 5,000 won, and will satisfy your hunger; the best of both worlds.

What is interesting about this dish is that it originally came from China. In 1905, the dish was introduced to Korea, and especially to the city of Incheon. There, a Chinese immigrant ran a restaurant where they served these black bean sauce noodles for the first time. Nowadays, although you can find it everywhere in Korea, it is still recommended to go to Incheon Chinatown to eat the best and most authentic version of this traditional dish. Fun fact, the first restaurant that introduced this dish to Korea is now the Jjajangmyeon Museum! This museum focuses on the famous noodles’ history and how they first came to be.

When do you eat it?

South Korea has a lot of days designated to celebrate the love between couples, way more than the typical Valentine’s Day we all know. But what is funny is that they also have an unofficial holiday called to celebrate single people, called “Black Day”. “Black Day” takes place on April 14, one month after “White Day”, another love celebration day. Traditionally, single people will go eat Jjajangmyeon on that day.

Another special day on which people typically eat Jjajangmyeon is moving day. Indeed, when people move home, they will usually get Jjajangmyeon delivered. Why? Simply because it is accessible and cost-effective, making it an ideal lunch option when you’re busy with moving.

Korean Jjajangmyeon or Chinese Zha Jiang Mian: What is the difference?

The main difference between the Chinese and Korean versions of this dish is the taste of the sauce. The Korean sauce is sweet whereas the Chinese one is saltier. Although this seems like a detail, it can change everything about the way something tastes. Consequently, depending on your taste, you might enjoy Zha Jiang Mian better than Jjajangmyeon, and vice versa. Usually, the Korean version also has more vegetables. Let me tell you how to recreate this popular Korean dish.

Rumor has it that if you try to find Jjajangmyeon in a Chinese Restaurant outside of Korea, you will struggle, to say the least. While still being pretty unknown to the rest of the world, this dish became mainstream in Korea, where people usually order it with another Chinese-inspired dish called Tangsuyuk.

You haven’t truly tasted Jjajangmyeon if you didn’t order Tangsuyuk along with it. But what is it? Tangsuyuk deep-fried and crunchy meat (usually pork) with a sticky, and perfectly balanced sweet and sour sauce. It is also topped with a few vegetables such as carrots, cucumbers, and mushrooms. Just like Jjajangmyeon, it is a Chinese-influenced dish. If you cannot decide between sweet and salty, then this is definitely the one for you! You will notice that people who go eat Jjajangmyeon together will usually order Tangsuyuk as a side dish to share with each other.

For the sauce and topping

If you want to read about more Korean-Chinese dishes, click here.