Is ramen from Japan? Learn the best way to cook it at home 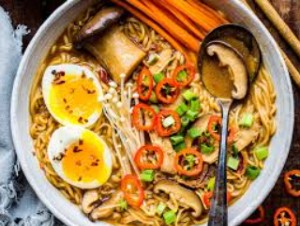 Ramen is famous all over the world as a Japanese noodle soup. As a result, there is a contradiction whether ramen is from japan or China.

First, let’s check what are its basic ingredients:

The Chinese-style wheat noodles are the noodles that everyone is familiar with. They are the most important ingredient in Chinese cuisine and also the one that Chinese people consume the most. Chinese noodles can be different in terms of ingredients, shape, width, and way of production, depending on the region of China that produces them.

Soy sauce or Soya sauce is a liquid sauce of Chinese origin. It is made out of soya beans. It has a strong Unami flavour. The unami flavour is the meaty or salty-spicy taste of foods.

Nori is a seaweed famous in the Japanese cuisine. It has a strong and unique flavor and is often used to wrap rolls of sushi or rice balls.

Menma is a Japanese spice made from bamboo sprouts. Menma is, mostly, made in China and is a common topping for noodles and, especially, ramen.

Scallions are the famous spring onions or green onions. They have a milder taste than most onions and their close relatives in the food family are garlic and shallot.

All in all, Ramen consist of many ingredients, other have their origin in Japan and other in China. So, can we say if Ramen is from Japan?

Is Ramen from japan history

Lets try to answer this question with a bit of history. There are two theories regarding ramen’s origin.

The first theory says that ramen first came to Japan during the 1660s by the Chinese intellectual Zhu Shunsui who served as an advisor to Tokugawa Mitsukuni (a Japanese politician of this time) after he became a refugee in Japan. So, it is believed that Mitsukuni became the first Japanese person to eat ramen. However, most historians reject this theory as a myth that the Japanese people created in order to make more attractive the origins of ramen.

According to historians, the more possible theory is that the Chinese immigrants living in the Yokohama Chinatown introduced ramen to Japan in the late 19th Century or at the beginning of the 20th. According to the record of the Yokohama Ramen Museum, ramen has its origin in China and made its way to Japan in 1859. Early versions of ramen were wheat noodles in broth (broth is a liquid made of water in which bones, meat, and vegetables are simmered), topped with roast pork.

Flavours of Ramen in Japan

The most popular ramen flavours are Shio, Shoyu, Miso, and Kare.

Shio ramen is the oldest one. Any ramen that gets its salinity and flavor primarily from salt, rather than miso or soy sauce, is a Shio ramen. It has a clear, yellowish broth made with plenty of salt and any combination of chicken, vegetables, fish, and seaweed. Occasionally meat is also used. But we boil them for less time than usual so the soup remains light and clear.

Shoyu ramen is a popular ramen seasoning in the Kanto region of central Japan, originally from Yokohama. Traditionally the broth is brown. We use chicken, seafood, and occasionally pork or beef-base to make it. However, these days all ramen chefs use this to make ramen.

Miso ramen took its name from miso, a Japanese seasoning, that we use to make its broth alongside chicken stock, vegetables, and pork. The noodles should be fresh and the best is to be springy, chewy, and yellow.

Kare ramen is a relatively new kind of ramen that is uses carry in the broth soup. In that curry soup there usually is pork bones and vegetables and curry in order to season it. Also, the noodles are usually thick and curly.

At this point I will show you how to make homemade chicken ramen, with a flavourful broth, roasted chicken and fresh veggies.

Assemble the ramen bowls: Meanwhile, chop the scallions and jalapeno (if using). Slice the chicken into thin pieces. Set aside. When the eggs finish cooking, add the ramen noodles to the boiling water.

Cook for 2-3 minutes, until soft, then divide the noodles into two large bowls. Add the sliced chicken and the ramen broth. Top with the fresh scallions, jalapeno, and the soft boiled egg. Serve immediately.

Is ramen from Japan?

In conclusion, we can be confident that ramen comes from Japan. There are a lot of ramen types that can fulfill everyone’s taste. As you can guess from the example of the homemade ramen recipe, cooking ramen on your own can be time-consuming and difficult, but it can also be fun. However, if you want to savor the original taste of ramen I suggest you went to a proper ramen restaurant to experience it.