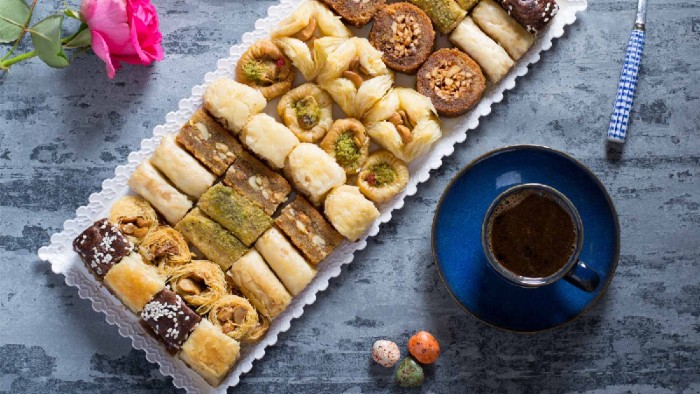 Like every other Mediterranean cuisine, Greek cuisine has the reputation of being heart healthy with its heavy use of olive oil, fish, lean meats, vegetables, and herbs. However, this doesn’t mean that Greek cuisine lacks traditional desserts. On the contrary, there is a huge variety of traditional sweets in Greece that you can choose from. Let’s get to know 5 of those dishes!

One of the most famous traditional sweets in Greece is Bougatsa or Mpougatsa. It has its origins in northern Greece, especially in the Central Macedonia region, particularly in Thessaloniki and Serres, where Greek refugees brought it in the 20th century from Istanbul. It consists of either semolina, custard, cheese, or ground meat filling between layers of phyllo. As a result, it can be sweet or savor depending on the filling. But what exactly is phyllo?

The base of traditional sweets in Greece – Phyllo / Filo

Since phyllo dough is the most common dough in Greek pastry cuisine, let’s talk a little bit about it.

Filo or phyllo is a thin dough that people use to make pastries in Turkish, Middle Eastern, and Balkan cuisines. Filo-based pastries are made by layering many sheets of filo brushed with oil or butter. The pastry is then baked. A fun fact about phyllo dough is that in order to make it at home it needs time and skill. It requires progressive rolling and stretching to a single thin and very large sheet. That is the reason locals most of the time choose to try these sweets ( or savor) dishes that have phyllo dough straight from the bakery.

Galaktoboureko is a type of dessert that comes from Greece. It is, also, a sweet dish with custard cream that lays between sheets of phyllo on the top and the bottom. This dish is different than other sweets. The reason for that is that it is assembled before the ingredients are fully cooked and baked so that the custard and the pastry finish cooking at the same time. In order to make the custard, we use milk, sugar, eggs, semolina, butter, and vanilla. The name for this dessert comes from the Greek word gala, which means milk, and the Turkish word Bourek, which means pastry.

Kadaifi is a syrupy desert popular in several cuisines of the Middle East and the former Ottoman countries. The main ingredient of the dessert is bread. It has a special crushed dough that has a fibrous form. In order to make it, we usually use wheat and water. This leafy dough is, also, used for the production of unique savory appetizers. The sweet contains nuts (almond, hazelnut) and honey to give it a crunchy and very sweet taste. Many countries claim the creation of the desert. Its origin is somewhere among the countries of the south-eastern Mediterranean. Nevertheless, the prevailing theory is that the sweet was created in Afyon Karahisar in Asia Minor (present-day Turkey).

All in all, Kadaifi is a very popular sweet in Arab countries such as Lebanon and Egypt and especially in Palestine and the former Ottoman world, Greece and Turkey. In Greece, it is common to eat alongside ice cream and, mainly, with Greek coffee and more rarely with traditional drinks like raki and ouzo.

One of the most popular traditional sweets in Greece is Halva. Halva is a dessert that you can eat at any time solely or with bread, tea, coffee, or wine. The taste is sweet and comes in many different textures and flavors. It depends on the additional ingredients like peanuts, almonds, pistachios, chocolate, and others. Many people say that the taste is in the same category as nut butter or peanut butter. It is a dish popular in countries between the Balkans and India and every country claims it is its own. There are many versions. Basic halva, as found in the Balkans and Turkey, is a simple dessert. The most common version is made by cooking semolina.

The first known written halva recipe appeared in the Arabic Kitab al-Tabikh (The Book of Dishes) in the early 13th century. According to Alan Davidson of The Oxford Companion to Food, halva is an Arabic dish. However, this dish is so popular in Greece, too, that the Greeks consider it a traditional Greek sweet.

Another famous one among the traditional sweets in Greece is Diples. Diples or Greek honey rolls is a Greek dessert from the Peloponnese. It has a thin sheet-like dough. They are essentially the same as angel wings, except that we dip Diples in syrup rather than serve them dry.

The dough is rolled into long, thin strips, fried and folded in hot oil, and then dipped in a sugar or honey syrup. Diples can be made in different shapes, of which the most common are bow ties and spirals. Diples are a typical dessert in the Peloponnese and Greek people usually serve them at ceremonies like weddings and New Year’s celebrations

As I have mentioned earlier making at home these sweets is difficult. However, there are exceptions and one of them is the Halva. So, lets see how to make it at home. The ingredients you will need are:

About the preparation method, the recipe is quite easy. The only hard part is that we have to do 2 things at the same time.

Another traditional Greek sweet you could make would be Diples (Greek honey rolls). If you want to learn how to make them at home you can check a recipe by clicking here.