What is souvlaki? Is it the most popular Greek fast food? 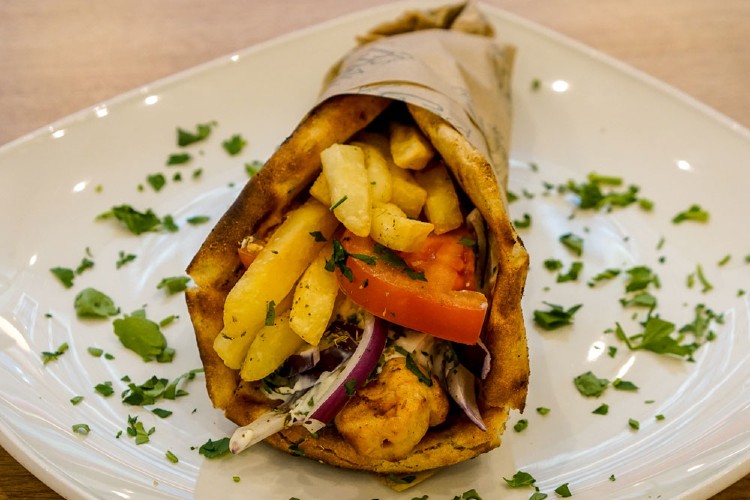 It is the most popular food in Greece, but let’s see what is souvlaki exactly. Basically, when we talk about souvlaki, we mean meat on the stick. But Greece is not the only country with this traditional style. The characteristic in all the countries with a tradition like this around the world is that when we talk about meat on the stick we refer to a fast type of food, which we find mainly as street food in open canteens or kiosks or just market shops, festivals and friendly gatherings.

Eating with the help of a stick. The idea is that we put meat, fish, vegetables, and seafood on some kind of metal or wood folded or resting on a kind of bread or pie along with various ingredients such as vegetables and spices. This is common in Spanish, French, and especially Asian and Arabic cuisine. So, lets learn a little bit about its origin.

A little bit of History

Well, the concept of cooking food on sticks historically dates back to the Bronze Age. Excavations in Santorini, Greece, show us that souvlaki(or the concept of eating with a stick) was popular in Santorini back in 2000 BC. However, the history of souvlaki as we know it today begins in 1924, when a political refugee from Egypt came to Greece and opened the first souvlatzidiko ( a restaurant specialized in making souvlaki) in Athens. And this is where everything started.

In the 1950s eating souvlaki with bread will become popular and the first donner with minced meat will appear for the first time in 1962. However, the Greek dictatorship will apply a law that makes obligatory that the taste of this food is pork. Thus, the history of this meal will change forever. After all, that, let’s see in which forms we are able to taste souvlaki today.

What is Souvlaki with pita?

The souvlaki consists of pieces of roasted pork passed on a small wooden stick. (that is the reason that in southern Greece it is ordered as “straw” and that is, also, the cause of another “dispute” with northern Greece). It is usually served with a slice of bread or a pie cut into four. We also find it with chicken (which, if wrapped in bacon, turns it into “chicken bacon”), with beef, with a combination of lamb and beef (kebab), with meat from a meatball, and even from a sausage.

The most fulfilling version is wrapped in a baked pie. In this version, it is, also, popular to use gyros along with tomato, onion, tzatziki, and potato. (Gyros is chopped meat and it is the same concept as the meat that we will meet in Europe in Kebab places). All in all, souvlaki is the stick with the meat. However, the most popular way of eating it is with pita. When you do that, you remove the meat from the stick and wrap it with pita ( a variation of bread). Inside the wrap, you can also put potatoes and veggies like onions tomato, lettuce, and a sauce of your preference. ( more typical tzatziki or yogurt)

What are the local differences in some places?

In northern Greece, the above version necessarily includes in addition to tzatziki also other sauces like ketchup and mustard. Also, in recent years many places have launched a vegan version of grilled vegetables.

In Cyprus, souvlaki is always served in a Cypriot pie, which with its contents is a complete meal. The Cypriot pie, in addition to the meat of the stick, includes onion, tomato, and parsley. Also, it is popular that the pita has chopped cabbage as well.

Other local differences are; in Larnaca, Cyprus there is the custom to put in the pita tahini, or the custom in Limassol, Cyprus to put pickles. The souvlaki restaurants in Cyprus, also, offer chicken souvlaki and seftalia souvlaki (minced pork with spices wrapped in lamb shanks). This can be prepared in combination, too. Half the meat of the stick and half of seftalia.

So, if you ever go to Greece you will not be able to avoid trying this food. For that reason, i will show you how to make it at home so that you can give yourselves a little bit of the taste of the original.

For the yogurt sauce

And, what is souvlaki?

In conclusion, Souvlaki can be a fast-food type of meal or a proper launch or dinner. Depending on how hungry you are, souvlaki offers us this option to select the quantity we want to eat. Also, I should not forget to mention that it costs between 2,5 and 3 euros. Furthermore, Souvlaki restaurants are numerous and you can find them, literally, in every corner of the country, or you can order it at home. Thus, it is impossible to miss out on living the experience of the Greek cuisine.