Most famous French cheeses. Do they pair well with wine? 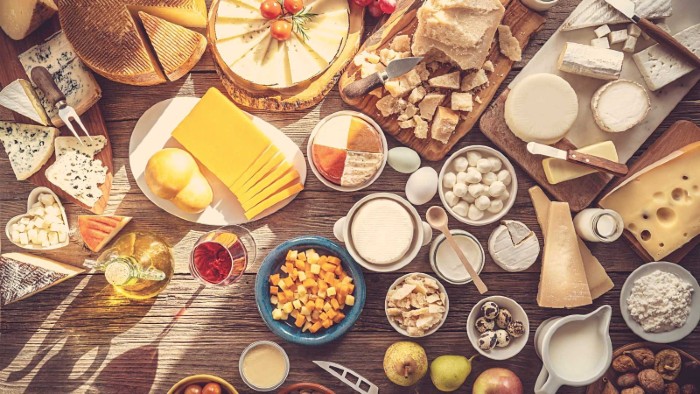 Well, we all know that French cuisine is one of the best around the world, but today I would like to expand a little bit about the most famous French cheeses. Cheese is popular around the world as one of France’s most prized contributions to gastronomy, and tasting exceptional French cheeses is usually high on the list for visitors. France produces somewhere between 1400 to 1600 kinds of cheese (according to the French dairy farmers). So, shopping at a fromagerie or a market means that you have to face shelves and cases of all shapes and sizes of cheese. You will likely spot a few familiar names such as Swiss Gruyère, Brie de Meaux, and Roquefort, but it can be an intimidating experience.

An example of cheese without cooking is Cantal cheese. Its birthplace is in the mountains of Auvergne. It resembles English cheddar and has a designation of origin. This means that the AOC (Appellation d’Origine Contrôlée) protects it by determining how and where we should produce cheeses that have the name Cantal. Generally, this cheese is made on farms, but the same farms produce larger quantities. Cantal comes in two varieties, the young and the ‘between two’ variety, when it matures much longer, thus achieving a more intense flavour. It has a natural rind, a firm texture, and a subtle yet complex flavor.

Another French cheese is Comté, similar to the Swiss Gruyère. It is a cheese that comes from the Comté region of eastern France, on the border with Switzerland. People, in order to make it, use milk from cows grazing at 400 meters above sea level. Comté is a cooked cheese, collectively produced village by village, using a method that has remained almost the same during the centuries. Comté is a cheese that can be with large holes or without holes at all. There are also varieties, from a more fruity taste to a more salty one. The most expensive Comté is usually the oldest (aging for more than six months). It is a traditional cheese that we will usually find in fondue and raclette. Learn how to throw the perfect raclette party by clicking here.

Fact: cheeses made with milk from cows that do not follow Comté rules are used to make French Gruyère. Other similar cheeses are Beaufort and Abondance.

The brie is one of the most famous French cheeses. The Brie would be the ancestor of all soft cheeses, as the camembert. It’s King Charlemagne who talks about it first in 774. Then it’s the turn of Robert II the Pious, who strongly cares about its trade in 999. Women will use it as a medium of exchange, like Blanche de Navarre and Queen Margot who respectively bribe Philippe Auguste and Henri IV with Brie toasts. Louis XIV loves and wants it every day for his meals. It is understood that the Brie is a royal cheese. But what’s the difference between the Brie de Meaux and the Brie de Melun, these two similar cousins?

Camembert is a cheese from Normandy and is one of the most known in the country and the world. A portion of Camembert can be smooth on the outside and intense without falling apart. A young cheese can be hard and dry with little flavor, and an aged Camembert is more yellow on the outside. Its flavor is intense, pungent, and similar to that of mushrooms, grass, and butter, while the aroma is moldy and cabbage-like. As one legend says, a farming woman named Marie Harel protected a priest who was on the run. In return, he gave her the recipe for the Camembert we know today. The cheese is ladled into molds by hand, dry-salted, then matured for 30 to 35 days.

Roquefort, the most famous of all French cheeses

Last but not least, we have the Roquefort cheese. It is probably the most famous French cheese. In order to make it we use full-fat, unpasteurized sheep’s milk. It has blue veins throughout its body. We create it by using the spores Penicillium roqueforti before we press the cheese.
It is so tasty and famous that it was the favorite of Emperor Charlemagne. It, also, has the name ‘cheese of kings and popes’. Roquefort has a moist rind on the exterior. On the inside, it is crumbly in texture and creamy, tangy, intense, complex, sharp, and salty in terms of flavor, with a white paste marbled with blue mold.

The most famous French cheeses and Wine

You may not have wondered why wine goes with cheese so well. However, this “union” is no coincidence, as a matching combination of wine and cheese can elevate the taste and maximize enjoyment. Wine lovers know this well, but now there is also a scientific explanation. A study conducted at the French Centre for Taste & Nutrition Sciences (CSGA) in Dijon, France, based on the evaluation of four wines and four kinds of cheese has found the reason why wine and cheese complement each other perfectly.

Before and after eating a small piece of cheese, the 31 participants took a sip of wine and chose a description from a list of possible tastes to describe the taste. This procedure was carried out with all possible combinations of cheese and wine. The volunteers’ responses showed that cheese influenced the description of all the wines, improving their taste. As the scientists discovered, cheese changes the perception of the taste of wine, enhancing its fruity aromas. In the two red wines in the study, the cheeses enhanced the red fruit flavors and reduced the feeling of dryness in the mouth. In the sweet white the sweetness did not change with the cheeses. But in the dry white the main aroma was more powerful. Experts recommend choosing cheese as an accompaniment to wine in order to enhance the taste of whatever you choose.