Types of ice cream. Everything you need to know 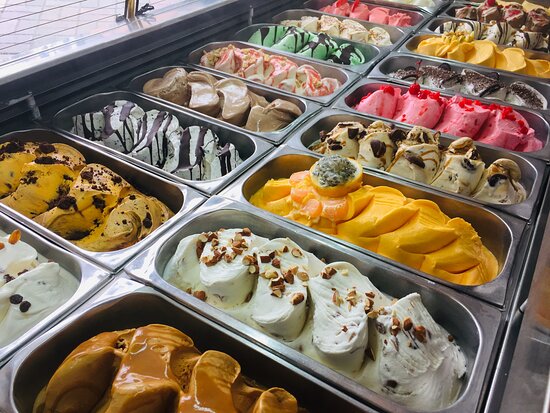 For most of us, the word “ice cream” brings back memories of carefree summers. Hot afternoons, sticky hands and dirty t-shirts. The taste of vanilla, chocolate, strawberries. The neighbourhood shopkeeper scolding us for keeping the fridge open while delaying our choice. Over the years, the few flavors of our childhood have multiplied. The preparations and packaging have become more elaborate and now there are countless types of ice cream for every taste. But let’s learn more about the beloved summer treat:

The history of ice cream

There are many speculations about the origin of ice cream. The most likely version is that ice cream came from countries with a natural presence of snow and ice. It is, therefore, speculated that the first ice creams that resemble the ice cream of today were made in ancient China and were made from Himalayan ice, rice flour cream, milk, and honey.

A previous form of ice cream was also made in ancient Macedonia from fruit, honey, and snow from Mount Olympus. It is even said to have been a favourite treat of Alexander the Great.

Later, during the Middle Ages, in England, France, and Spain, there were references to various recipes for sweets made from iced cream, which were secret and strictly forbidden to be leaked outside the royal court. The confectioners who made them were extremely well paid. This was so because the preparation of the sweet was incredibly difficult and time-consuming.

In the 16th century, a Spanish doctor living in Rome discovered that by adding nitrate of potash to snow and ice anything could be frozen much faster. This invention gave a big boost to ice cream production. In the 19th century, ice cream also came to America with the arrival of Italian immigrants, who sold it as itinerant ice cream vendors.

But enough with history. Let’s check the types of ice cream one by one

It is the classic ice cream that we can find in pastry shops and ice cream parlors. The cream consists mainly of milk that is whipped in a mixer, frozen, whipped again frozen, and refrozen. This process can be repeated several times until the cream doubles in volume, trapping tiny air bubbles.

Parfait ice cream is softer and creamier than classic soft serve ice cream because it contains whipped cream. So it doesn’t crystallize and is more frothy. It usually contains glazed fruit and nuts and the cream tastes like vanilla or chocolate. The parfait, with its characteristic serving in the tall glass, is rich in saturated fat and cholesterol due to its cream and egg content, it is high in calories and therefore cannot be a frequent choice for those who are particularly concerned about their calories intake.

We can find it in Italy and in shops selling Italian gelato. It is very similar to the classic cream ice cream but is whipped more slowly, resulting in a creamier texture. During the slow whipping process, no air pockets are created and no ice is incorporated, so the cream is denser and richer.

Or ice cream in rolls. It is a type of ice cream very common in Far Eastern countries like Thailand. In fact, it is one of the most common street foods. In recent years it has gained fans in European countries as well. We prepare it at the moment when we order it, on a frozen metal plate. On the plate, we spread freeze and mix the milk with ingredients of the customer’s choice, such as nuts, cereals, or fruit. We roll the resulting thin sheet into rolls and serve it in a cup.

Frozen yoghurt is a light, alternative ice cream option. It is very popular almost all over the world and is a favourite choice for those who are watching their diet. We serve it plain, vanilla or kaimaki flavoured and top it up with syrup, honey, spoon sweets or nuts. (Learn what is the kaimaki flavour by clicking here)

The basic preparation of sorbet involves plain fruit juice with a little sugar or other sweetener added. Sometimes, however, milk or rum is added to make it softer and creamier. It differs from granita in the texture of the ice cream as in granita large crystals are preserved. In sorbet, the mixture is whipped while freezing. It does not contain milk, fat, or egg, but only juice or fruit puree and sometimes a sweetener, which is why we consider it a low-calorie proposition compared to other types of ice cream, such as parfait.

The granita consists of water and syrup. Its liquid crystalline form is due to the continuous stirring system which, while freezing the mixture, does not allow it to coagulate. The most common flavours are strawberry, cherry, lemon, and cola.

Ice popsicles are a famous ice treat that children around the world really love! It includes mostly water, sugar, corn syrup, stabilizers, and gum. The mixture will be frozen on a stick. You will feel the velvety and smooth texture when the popsicle touches your tongue!

Ice popsicles are super easy to make at home, so many people usually make this quick snack or lovely dessert in the summer. Unlike Sorbet or Sherbet, people won’t stir the ice popsicle mixture while freezing but let it freeze like ice cubes.

Ice cream cools us down while satisfying our need for sweetness. Depending on the flavour and type of ice cream we choose, we get different benefits. An ice cream with a high milk content contains calcium, vitamins A, D, and E, magnesium, phosphorus, and casein, while sorbet ice cream contains all the valuable vitamins of the fruit that we use to make it. However, if the calorie content of ice cream is a concern, there are now delicious sugar-free and fat-free options on the market. However, ice cream, even in its classic version, when it has milk and sugar, is a light choice if you compare it to other types of desserts such as syrups, cakes, etc.