Rakı and Fish Tradition: How to Prepare the Table Like a Real Turk 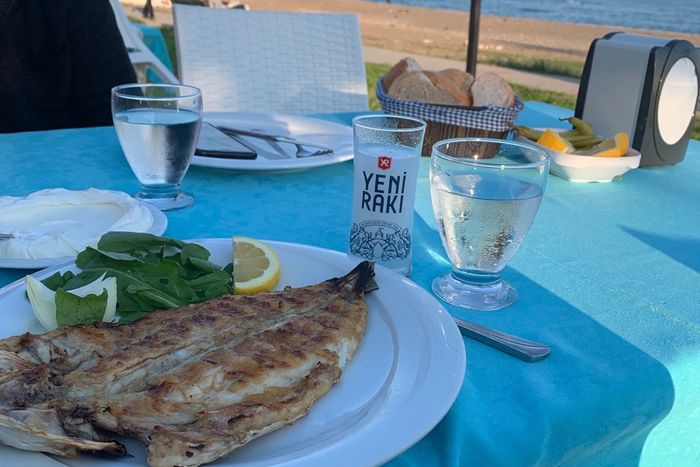 The origin of the rakı and fish tradition, which started especially in small coastal towns, dates back to the Ottoman Empire. This duo, which is indispensable for Turkish taverns, also continues to maintain its popularity today. Most Turks believe that rakı and fish cannot be consumed separately. As the famous Armenian-Turkish photojournalist Ara Güler said “fish is caught not with net or rod, but with rakı”.

Read on to learn more about this duo and the rakı and fish tradition.

Rakı is one of the most popular alcoholic drinks in Turkey. It is made by fermenting and distilling fruits such as grapes, figs, plums and apples with alcohol, and anise is added to it. It is possible to find drinks similar to rakı in other countries. In Greece, rakı produced from fresh grapes is called “uzo”. In France, Spain and Portugal, this drink is commonly known as “anis” or “pastis” and in Italy, they call rakı as “sambuca”.

The most preferred places to drink rakı are Turkish taverns. In these places, slow arabesque Turkish music is played and an extraordinary atmosphere is usually created for people to share their sorrow with other costumers. Later at night, this sorrow turns into joy with the effect of drinking and sharing it with others, and everyone has a pleasant time.

The tavern of the “Anastapoulos” brothers in İzmir, located on the current Bornova Street, was one of the most famous of these taverns. Since there is a lion, the symbol of the family, on their old rakı barrels, another name for rakı has remained as “lion’s milk” since then.

Lion’s milk has a distinctive pungent smell and a strong taste that burns the throat at first. It is a strong alcoholic drink. Therefore, it is not preferred to be drunk alone, it is usually consumed with fish and appetizers.

Rakı and Fish: The Tradition

In this tradition, the most famous fish species to accompany rakı are bluefish, sea bass, turbot, sea bream, sardines, and horse mackerel. These fish are usually consumed cooked on the grill. It is preferred to be eaten by pouring garlic and lemon on it as a sauce. Foliage such as arugula and parsley go well with fish. You can also eat other vegetables such as tomatoes and peppers with them. It may be a good idea to grill these vegetables.

A Must for Rakı and Fish Tradition: Appetizers

If you go to a Turkish tavern or practice rakı and fish tradition at home with your friends and family, one of the things that catch your attention on the table will be the variety of appetizers. Appetizers, which make the table look colorful, can be of many different types, such as sweet, bitter and sour. Here are some famous Turkish appetizers and how to prepare them.

Known as acılı ezme in Turkish, this appetizer is usually consumed not only with fish but also with kebab. To prepare this appetizer, first add to a small bowl a teaspoon of pepper paste, the juice of one freshly squeezed lemon, four tablespoons of olive oil, two tablespoons of pomegranate syrup and the spices you want. Mix these ingredients. Then, peel three tomatoes and chop them finely. Take the seeds of three hot green chili peppers and cut them into small pieces. After that, finely chop half a bunch of parsley and six onions. Grate three cloves of garlic. Mix all the ingredients and add one teaspoon of salt and two teaspoons of flaked red pepper into the mixture. Your chili paste is ready, bon appetit!

This appetizer, for which a song has even been written about it, is undoubtedly the most popular form of eggplant in Turkey. To prepare this appetizer, after peeling the two eggplants, cut them into cubes and put them in a bowl filled with salt water and wait for the bitter water to pass. Then, cut three green peppers, one capia pepper, four potatoes and one zucchini into cubes. Fry all the vegetables in a separate frying pan in the oil you have heated. Depending on your preference, you can prepare a sauce with garlic and tomatoes or yogurt.

This salad, which is consumed a lot by people living in the Aegean region, can even replace a single meal with its satiation. To prepare this appetizer, first soak a glass of black-eyed pea in water for a few hours and boil it. Then, finely chop one capia pepper, three sprigs of spring onion, four sprigs of dill and four pickles. For the sauce, in a separate bowl, pour half a teaspoon of salt, five drops of lemon juice and a tablespoon of pomegranate syrup and mix them. After the black-eyed peas have cooled, add the sauce and remaining ingredients and mix. You can adorn your salad with greenery.

Rakı and Fish Tradition: How to Prepare the Table

How to prepare the best rakı table? Colorful and various cold appetizers and salads are placed in the middle of the table. The fish is served hot. There should always be extra cold water and ice for rakı on the table. Rakı is served in a special glass called a “kadeh”. If you like to consume alcohol with sugary things, you can also try traditional Turkish desserts after your meal. Do not forget to invite your family and friends after everything is ready, because the tradition of rakı and fish is not fun if you are alone!

Looking for similar articles? Check it out here.