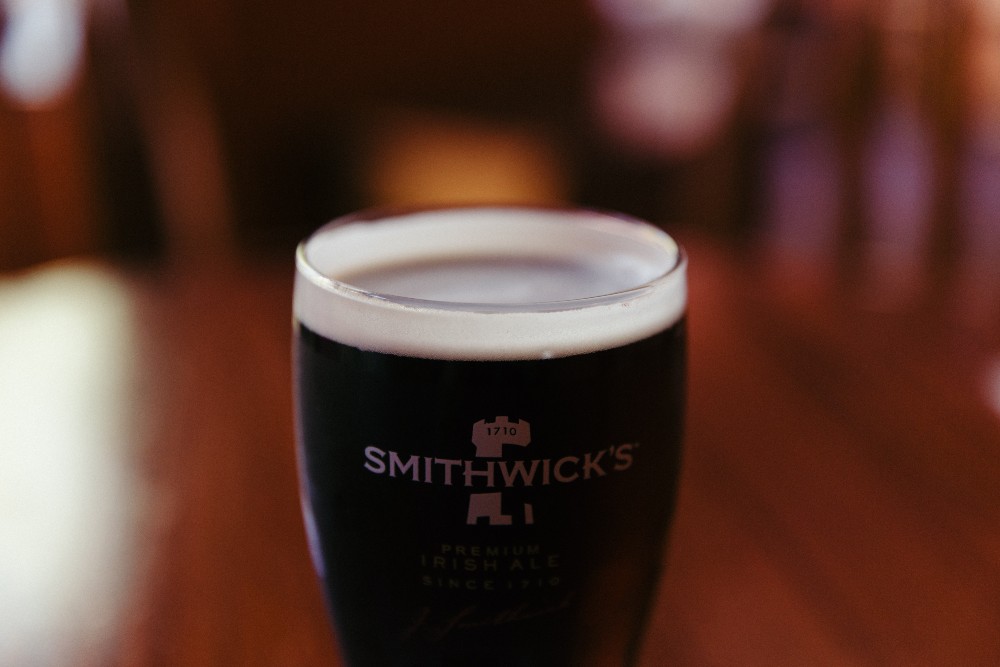 Beer is the best. Following on from my article on the best fish and chips recipes, this article explores some of the best Irish beers that the Emerald Isle has to offer alongside hearty seafood cuisine. Irish pubs are well known around the world for being a safe haven and somewhere one can go to enjoy a casual and friendly atmosphere, delicious food, and tasty beer.

Ireland is not as well known for its lager as it is its stout beer. Guinness is well known around the world, and the likes of Murphy’s and Smithwick’s are long-time popular choices among beer drinkers in Ireland. Nevertheless, the likes of Harp lager and new additions such as Rockshore are favored among fans of light beers.

First up is one of my favorite beers-Five Lamps Lager. Known as “The Beer of Dublin”, this lager is named after the iconic Five Lamps on Amiens Street, a sign of Victorian Dublin. An easy to drink beer with grassy hops and light malts, this beer is best enjoyed on tap at a Dublin pub, such as The Bleeding Horse on Camden Street. However, if you’re a fan of a good Mexican meal, you may have been recommended to try out one of the best Irish Burrito Bars; you can also get cans or bottles of this iconic beer at Boojum, found in locations across the city center.

Before relocating to Dublin in 2013, Smithwick’s brewery in County Kilkenny was Ireland’s oldest operating brewery, on a site where monks had brewed ale since the 14th century. This Kilkenny beer is a delicious ale that is ruby red in color and contains hints of caramel and biscuits. Goes perfectly with some Cahill’s Irish Cheddar.

One of the few Irish pilsners on the market, Harp was released in the 1960s by the Guinness company in response to demand for continental lager. It is not as readily available in the Republic of Ireland as it is in the North of Ireland but can often be found in an Irish bar in North America and Australia. Harp lager is light and hoppy and not too bitter and is the perfect beer for a warm day spent in a beer garden.

Brewed at the famous St. James Gate Brewery in Dublin, this beer is probably Ireland’s most well-known export. It is a dry stout which is available in 120 countries, known as “the black stuff” for its distinctive dark color. Its flavor derives from malted barley and roasted unmalted barley and the thick, creamy head comes from mixing the beer with nitrogen and carbon dioxide. If in Dublin, I would recommend visiting the Guinness Storehouse at St. James Gate for a full Guinness experience. Otherwise, you should check out one of the many Dublin pubs which are known for their Guinness, such as Mulligan’s, The Confession Box and The Gravediggers.

A recent addition to the Irish lager market, this beer is perfect for those who prefer a lighter-tasting beer that is easier to get down. It is soft and crisp and inspired by the rugged refreshing experience of the West Coast of Ireland. It is an aesthetic beer that invites you to take in a sensual experience of fresh air on the Atlantic coast.

O’Shea’s is one of the lesser known Irish beers. It is usually relatively cheap and you are more likely to find it in a supermarket than an Irish restaurant or bar. Nonetheless, this dark red beer harbors a rich and malty flavor, with hints of raisin and caramel. It need not be served as cold as other beers as it tastes better when slightly warmed.

Named after a 100-year old building at St. James Gate that was used to store hops, Hop House 13 was released by Guinness in response to the growing appetite for craft beers. Peter Simpson, the man that led the creation of this beer, famously said “needs more hops” and thus it was born. A double-hopped, golden-colored beer, this crisp lager is full of hop aromas along with hints of peach and apricot. It is made with barley, Guinness yeast, Australian Galaxy and Topaz hops, and American Mosaic hops. This beer can be found in most Irish pubs nowadays, despite only having launched in 2015. Moreover, it is also popular in the UK and can be found as far away as South Korea. If you’re looking for the premium selection of Irish lager, you cannot go wrong with a Hop House.

Only the best Irish pubs and Irish restaurants stock this beer. It is the original Irish stout and even predates Guinness. This beer originates from County Cork, and is still brewed there, in the Heineken facility. I would recommend enjoying this beer alongside an Irish stew or roast dinner at a gastropub. Moreover, you can only find this beer in Ireland and it has quite a history. Its brewery, the Cork Porter Brewery, was founded in 1791. One of its owners, Digby O’Brien, aimed to sail to France on a merchant ship. He was captured, imprisoned and killed in Brest, France in mysterious circumstances, likely due to O’Brien being seen as a hostage that could command a large ransom during the Napoleonic Wars. In terms of flavor, Beamish has a rich roasted taste with coffee and dark chocolate undertones.

Another beer brewed in County Cork, this is a fantastic choice for those of you who are new to dark beer. It is low on bitterness and contains undertones of coffee and toffee. In fact, it has even been compared to chocolate milk. It packs a caramel and malt flavor and is not carbonated at all. It is said that the water of the River Lee is what gives this beer its quality.

Lastly, we have O’Hara’s. If you’re looking for a beer that packs quite a bite, this is your guy. It is quite new, having only been founded in 1996, and is a family-run company. It has a bitter taste and is hopped multiple times. This beer contains a combination of noble hops, specialty malts, and a classic lager yeast strain, which allows the esters and hop aromas to combine and balance perfectly.

I hope you gained something from this list of beers. Beer is a complex phenomenon and no two lists of top 10 beers will ever be the same. Nevertheless, let us know your thoughts about others you feel that should have been included. Also, make sure to check out some of the best Irish pubs to ensure you enjoy one of these quality beers in its finest form.