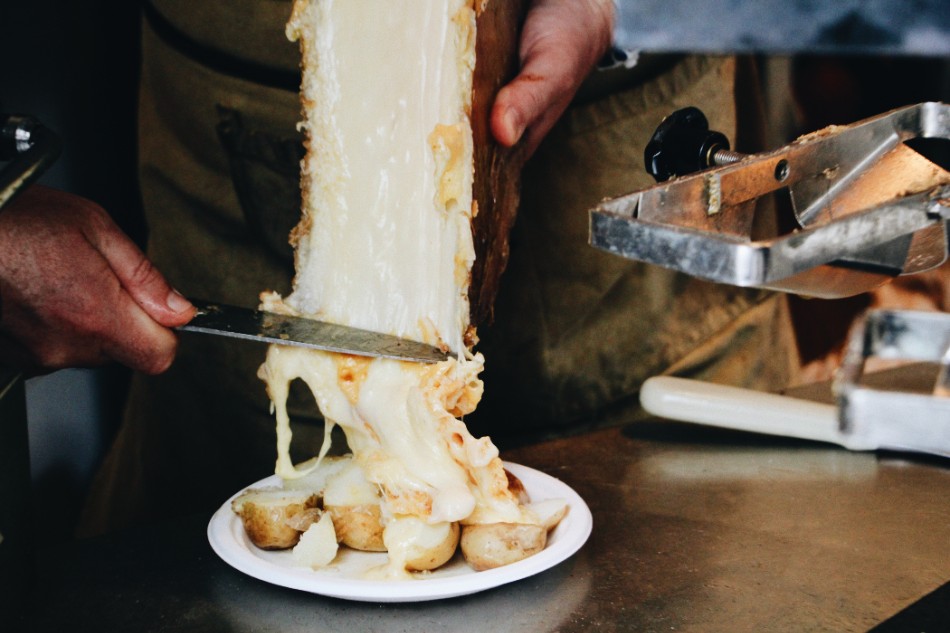 If you’re planning on hitting the slopes this winter but are also hoping to enjoy some delicious continental cuisine, use this guide to help you make up your mind about which country to visit. This list will show you 10 of the most famous dishes enjoyed in various parts of the Alps. Après-ski food is high in calories and perfect for replenishing your energy levels after a day of full-body exercise. Ski resorts across Europe have spent years refining their dishes to offer up the finest flavours the mountains have to offer. So transport your taste buds to the Alpine region for the next few minutes, and have a glance at these delicious and satisfying winter meals that you can enjoy on your next ski holiday.

First up we have tartiflette, an authentic, heart warming dish from the French alps. Tartiflette began appearing on the menus of ski restaurants in the 1980s. The dish is made with potatoes, reblochon cheese, onions and bacon lardons. A splash of wine can also be used when preparing this dish. Interestingly, this dish came about as a result of a marketing campaign to sell more reblochon cheese to skiers in the 80s and it is a variation of pela des aravis, which is a similar dish without the bacon. These dishes are part of a wider Alpine tradition of having melted cheese on potatoes as a staple meal. Tartiflette is served in ski resorts such as Tignes, Chamonix, Morzine and Val-Thorens.

Next, we have Schnitzel and chips/fries. This is a classic for winter sport enthusiasts and is served right across the Alps. It consists of a slice of thinned, breaded meat alongside french fries. It can be made using chicken, pork, mutton, beef, turkey or veal. In Austria, they have a speciality known as ‘Wiener Schnitzel‘ which is a pan-fried, breaded veal cutlet served alongside chips or potatoes and a sweetened vinaigrette dressing. You can find this dish at most ski resorts in the Alps, although it is not as popular in French ski resorts.

Another French dish, fondue bourguignonne is a great option to enjoy as a group.  It consists of tender beef cubes which are cooked in butter and cooking oil. The beef is cooked to your liking and is then dipped in a selection of sauces. These sauces can include dijonnaise sauce, horseradish sauce, onion sauce or the famous cheese sauce. Fondue bourguignonne is served with vegetables, bread, fruit and sometimes fries.

Alongside its French counterpart, Swiss fondue is a mouth-watering and flavoursome pot of goodness. This cheese fondue is particularly popular in Swiss ski resorts, such as Zermatt, Verbier and Davos. It consists of melted cheese served in a communal pot. It is usually served over a portable stove to keep it warm and is heated either with a candle or a spirit lamp. Then, you quite simply dip a piece of bread into it, usually with a long-stemmed fork.

Swiss fondue is made using a blend of cheese, wine and seasoning, but can also be made with beer. Additionally, cornstarch and garlic are used when preparing this dish and kirsch, a type of brandy is also often used. Usually, there will be a thin crust of toasted cheese left at the bottom of the dish, which is known as la religieuse. This has the texture of a cracker and is eaten at the end of the meal.

Looking to prepare some fondue yourself? Check out Cooking24h’s article on How to make cheese fondue.

If you’re planning on visiting an Italian ski resort this winter, chances are you’ll come across Polenta. Polenta is a dish of boiled cornmeal which can either be served as a hot porridge or allowed to cool and solidify into a loaf which can be grilled, fried or baked. It originated in Northern Italy where it was essential to the survival of poor peasant and working class families. Generally, it is served accompanying your main course.

In addition to fondue, this is another popular Swiss après-ski food. Raclette is melted cheese served alongside boiled potatoes, and often with dried meats and gherkins. It can also be served with cornichons, pickled onions, black tea or Fendant wine. Additionally, in France it is customary to serve it with white wine, such as Savoy or Pinot Grigio. The dish originates from a tradition dating as far back as 1291 in which peasant cow herders from the mountainous Alpine regions of Valais and Fribourg melted cheese on a campfire and scraped it onto bread.

For those of you interested in an authentic raclette experience, many restaurants in Switzerland employ a scraper, who continuously serves everyone in the restaurant from an oven which is placed in a separated table or near a wood fire. Moreover, in France restaurateurs will often place the oven directly on your table and the scraping is done by the guests.

Next, we have the dessert options. You’ve probably heard of Apple Strudel already, as the Austrian national dish is well known across Europe. This tasty dish is made with apples, raisins, cinnamon and sugar and encased in a delicious flaky crust. Though it is very popular at Austrian ski resorts like St. Anton am Arlberg, Mayrhofen and Kitzbühel, it is a traditional pastry in the entire area that once formed part of the Austro-Hungarian empire. Therefore, you can find it in Austria, Hungary, Czech Republic, Slovakia, Poland, Serbia, Croatia, Slovenia, Romania and Italy. In fact, you can even find it in Southern Brazil, as a result of German and Austrian immigrants taking the dish to the area in the 19th century.

If you wish to try the food of a king, Kaiserschmarrn is the way to go. Kaiserschmarrn literally translates as ‘Emperor’s mess’ and gets its name from the Austrian Emperor Franz Joseph I who was said to be quite fond of this fluffy caramelized pancake. You can enjoy this dish as a dessert or for lunch when skiing in the Austrian Alps, where it is served at mountainside restaurants as a filling meal. The batter is made from eggs, flour, milk, sugar and salt, baked in butter. The egg whites and yolk are separated and beaten. Then, the flour and yokes are mixed with sugar and more ingredients are added. These depend on the chef’s personal preference and may include nuts, plums, cherries, caramelized raisins, chopped almonds or small apple pieces. However, in the traditional recipe there are only raisins, which are soaked in rum.

Finally, the pancake is split into pieces with forks while it fries and sprinkled with powdered sugar. Kaiserschmarrn is often served with applesauce, fresh berries and vanilla ice cream. You can also have it with plum sauce and it is traditional to enjoy this dish alongside Zwetschgenroster, a fruit compote made of plums.

Next up we have one of the most well-known dessert dishes on the continent, crème brulée. This is a dish whose history has caused significant debate within the modern gastronomical community. It is almost the exact same as crema catalana and some believe that it was the Catalan dish which inspired European chefs. Others contest that the dish originated in England.

In any case, this caramel and custard dish is popular in Alpine ski resorts, where it is served in small dishes known as ramekins. The caramel is usually formed directly on top of the custard. A red-hot cast iron disk with a wooden handle, known as a salamander is used to caramelize the sugar after it is sprinkled on the custard. A butane torch can also be used. Thus, the cream is burnt.

Lastly, another rich and flavorsome fondue dish, this time for dessert. Like fondue bourguignonne and swiss fondue, this is also prepared in a caquelon, a pot made of stoneware, cast iron, porcelain or ceramic. Slices of pastry, cake or fruit can be used when preparing chocolate fondue. They are dipped into melted milk chocolate which may also be flavoured with rum.

Take a look at 20 best fondue recipes for even more inspiration to prepare a delectable fondue.