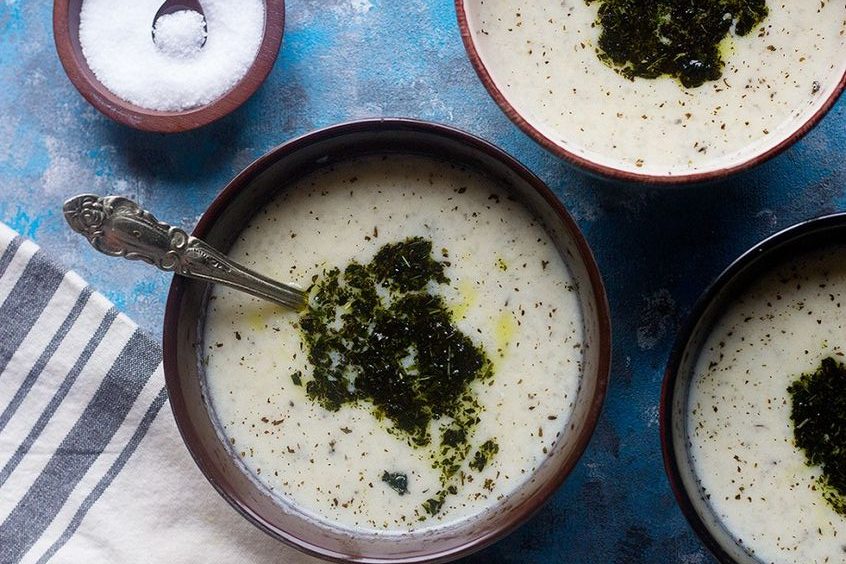 Soups are indispensable in Turkish cuisine. The diversity, different contents and forms of Turkish soups are mainly due to the fact that the Turks have a very rich culinary culture. The characteristic feature of traditional Turkish soups is that they are seasoned and enriched with plenty of spices. At the same time, they have a more granular structure in different countries, while Turkish soups generally have a homogeneous and smooth structure. This form, which is now very easily obtained with a blender, was obtained by quite traditional straining processes in the old days. Turkish soups with worldwide reputation are listed in this article. Read on to learn more about the best soups of Turkish cuisine.

The Best Soups of Turkish Cuisine: The Story of Ezogelin Soup

The story of this soup is as unique as it is itself. A girl named Zöhre was born in 1909 in the village of Urus in Gaziantep’s Oğuzeli town. Later, when the whole village became famous for her beauty, they called her Ezo, which means “Beautiful”. They added “Ezo Gelin (the bride Ezo)” after she comes to the age of marriage and fall in love, and after got married. And they unwittingly gave the name of one of the most famous Turkish soups known today.

Ezo married the man she loved, but this marriage ended due to the interference of other people in her marriage. For six years, Ezo did not marry anyone. But she continued to get prettier day by day. Many people wanted to marry her, but she only said yes to her aunt’s son Memey. This marriage is made according to the berder tradition, which is rarely used nowadays. Ezo’s brother also marries Memey’s sister. This is one of the details of Ezo saying yes to Memey.

Ezo became Ezo Gelin (the bride Ezo) again. But this time she had another sadness. Her husband, Memey, lives in the Turkmen tribe, and Ezo moved to his place, Kozbaş village in Calabrus, Syria, near the Turkish border, after her marriage. Her pain of love is gone, but the longing for her country has taken its place.

How to Cook Ezogelin Soup

First, boil hot water in a deep pan. Then wash the lentils, rice and bulgur and throw them into the water. Add salt. Cook until the lentils are soft. In another pan, melt the butter and fry the onions. Add tomato paste on it, after the smell is gone, add chili pepper and mint and mix. Add the mixed ingredients to the lentils. Mix quickly and cook for 10 minutes with the lid of the pot closed. Finally, do not forget to squeeze lemon on it before serving.

Tarhana is a dried food compound present in Central Asian, Southeast European, and Middle Eastern cuisines that is made from a fermented combination of grain and yoghurt or fermented milk. This soup is a cure for the sick. It is rare to find someone who does not like it with its taste and benefits.

The Best Soups of Turkish Cuisine: How to Cook Tarhana Soup

Firstly, add oil, mint, tomato paste, spices and tarhana into the pot and stir-fry a little. You can also use butter if you wish. Or you can add tarhana after adding water and mix it with a whisk. Thus reducing the possibility of clumping.
Then, add water slowly and cook, stirring constantly. You can mix it with a wire whisk to avoid lumps (stir until boiling).
After boiling, wait another 5 minutes and remove from the stove. Your soup is ready, bon appetit.

In Turkey known as soup with yogurt, also called as yayla soup, is made with a variety of herbs, rice, and chickpeas. It is found in various forms throughout the Middle East.

The Best Soups of Turkish Cuisine: How to Cook Yayla Soup

First, put water, oil, salt and rice in the pot. Boil until the rice is soft.
In a separate bowl, whisk the yoghurt, egg and flour together with 1 glass of water.
When the rice is soft, mix it quickly and add the yogurt mixture to the soup. Stir until it boils. When it boils, boil it for 10-15 minutes on low heat. Do not forget to stir occasionally.
Turn off the heat after the soup is cooked.
Pour the soup into bowls. Heat the butter in a separate place and mix it with the mint and drizzle over the soups in the bowls. Finally, add the remaining mint butter to the soup in the pot and mix.

Kelle paça soup is a soup that features offal as a primary component. The head and foot of a sheep or a goat is put into a pot with water, onions, and salt. The soup is then simmered until the meat is tender and falling off the bones.

The Best Soups of Turkish Cuisine: How to Cook Kelle Paça Soup

Ingredients for Kelle Paça Soup Recipe
– 1 kilo of head meat of sheep or a goat (boiled and sorted in pressure cooker)
– 2 egg yolks
– 1 tablespoon of heaped flour
– 4 tablespoons of yogurt
– 2 cloves of garlic
– Juice of half a lemon
– 1 tablespoon of butter
– 1.5 or 2 liters of water (you can also use boiling water if you want it to have an intense taste)

Start making the soup by roasting the flour in butter.
Add the water little by little with the help of a whisk and let it boil.
Whisk the egg yolk, lemon juice and yogurt in a bowl.
Then, add a ladle of boiling water and pour it into the pot little by little and whisking.
Add the boiled and cleaned head meat and crushed garlic and bring to a boil for a moment or two.
Finally, add the salt.