Everything you need to know about steak 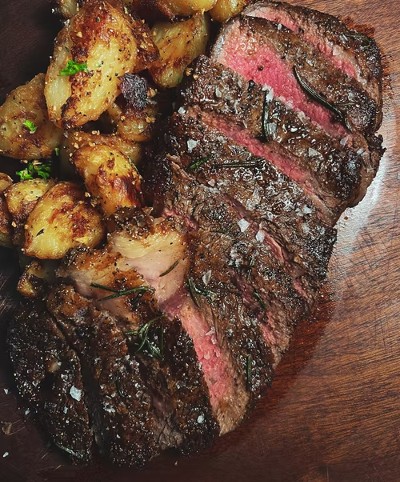 There are not many things better than a juicy, tender, and flavorful steak. Most people may be familiar with certain cuts such as ribeye and sirloin. But, if you’ve ever wondered about some of the other options on the menu at your local steakhouse (like papi steak or steak 48), then read on to find out more about where the cuts come from and the best way to cook them. Steak is such a simple thing to cook (you can even make air fryer steak), yet it is what many people answer when asked their favorite food.

This is probably the most well-known type of steak. The “ribeye” steak, as its name suggests, is cut from the center, or “eye,” of the rib section of a cow. It is one of the fattiest types of steak, loaded with marbling (the white flecks of fat within the muscle), which gives it lots of flavor. You can opt for a bone-in or boneless ribeye. Moreover, unlike other cuts, you don’t need to worry too much about overcooking and can cook slightly past medium if you wish as the meat is quite thick. In the US, ribeyes are often known as Delmonico steaks due to their popularization by New York City’s Delmonico restaurant.

This tender and appetizing steak is very affordable compared to other types. It’s cut from the chuck (lower neck and upper shoulder) section of a cow. It is a relatively new cut of steak. Despite this, it is found in many butchers and meat markets due to its growing popularity. You should grill a flat iron steak. It is recommended to marinate it to boost its flavor and tenderness. This steak is also known as a butler’s steak or an oyster blade.

Sirloin is a boneless steak which comes from the sirloin section of a cow which is around the rear of the animal. Though some say that sirloin has very little flavor, it is a very popular cut of meat. When prepared properly, it has a distinct beefy flavor. It doesn’t have much fat or intramuscular lining so you should make sure you don’t overcook it. If you cook higher than medium temperature, the steak will come out dry. It is a relatively cheap steak and is also known as top sirloin. Make sure to season with salt and pepper and some dry rub alongside.

The size and flatness of flank steaks make them ideal for sharing with loved ones or enjoying by oneself.
This relatively tough cut comes from the cow’s abdominal muscles’ back part. It is a deliciously tender piece of meat with careful and appropriate preparation. If you want to electrify your taste buds, you should serve flank steaks with robust, assertive sauces like chimichurri. The easiest way to cook flanks is to grill them over high heat after marinating them to add additional flavor. Keep these steaks close to the medium-rare range and avoid overcooking.

Although less tender than flank, it has a comparable flavor. Like flank and hanger steaks, skirt steaks are frequently used in tacos or fajitas. They benefit from a marinade and cook beautifully on the grill or in quick stir-fry dishes. This cut comes from the abdominal muscles, as does the flank steak.

The steak is more tender than many other varieties of steak because the tenderloin muscle receives little exercise and has less connective tissue. Tenderloins are thought to be less flavorsome than many other cuts since they are so lean. But, they make up for their lack of marbling, with a silky, buttery texture that melts in the tongue with every bite. Because tenderloins have so little fat, you shouldn’t overcook them. Use a cast-iron skillet at first and immediately sear both sides over high heat. The typical outcome of overcooking a steak is a crispy, thin steak that, let’s face it, has been spoiled.

This strip is taken from a cow’s short loin. Any steakhouse you go to will sell this as one of their top dishes. This is attributable to its substantial marbling and robust beef flavor. Although extremely soft, the texture is still sufficiently chewy. A strip steak is also rather simple to prepare. These steaks simply need a little amount of salt and pepper to be prepared for pan frying or sous vide cooking. Cook while keeping a close watch on it over a high heat. We advise cooking strip steaks a little bit rarer than usual due to their decreased fat content. Moreover, you have probably unknowingly eaten a strip steak. These are also referred to as New York Strip or Kansas City Strip steaks (boneless).

This beef cut is essentially a ribeye that hasn’t been separated from the cow’s rib bone. The size of a tomahawk’s bone determines how thick its meat is. However, the majority are two inches or smaller. Also, they weigh enough to feed an entire family! Despite being enormous, they are not too challenging to prepare. The steak should be seared in a cast-iron pan or on the hot side of a grill for the best results. Finish up by preparing the meat in your oven or on the grill’s side that receives indirect heat.

Porterhouse steaks, which combine strip and tenderloin steaks into a single cut, are also available on the bone.   Although these steaks are incredibly delicious, they take a little longer to cook than normal steaks because of the two differing fat concentrations. We advise treating porterhouse steaks similarly to strip steaks. Cook until medium-rare over high, dry heat. To make sure the two varieties of steak have cooked through properly, you will need to check them often. Try to position the tenderloin farther from the area of high heat to ensure that the strip and tenderloin sections cook at the same time. You can position your steak more effectively if you have a meat thermometer.

This cut is taken from a cow’s belly. It  hangs from the diaphragm between the ribs and the cow’s loin, as the name suggests.  It is quite reasonably priced and features a variety of flavors. The hangers are more tender than a skirt or flank steak, despite common comparisons. You should  marinate a hanger steak before cooking. They become more tender and the flavor is improved as a result. To make sure it doesn’t become too tough to bite into, grill over high heat.

The rump steak, possibly the most well-known variety of steak, brings us to a close as we count down the various steak varieties (it is also known as a round steak). This inexpensive cut of beef is really flavorful when prepared properly. Rump steaks are one of the greatest steaks for marinating because they are lean and relatively tough. Prior to cooking, you should have marinated for at least four to five hours for the finest results. In a cast-iron skillet over high heat, sear a rump steak until it reaches the medium-rare stage. After it has finished cooking, give it 10 to 15 minutes to rest. The steak should then be cut against the grain.

Wish to read about the best steakhouses? Check out https://bigseventravel.com/steak-europe/

Of course, the best thing to serve alongside a juicy steak is chips. Read about French fries here.