The Best Moroccan Food: Everything You Need To Know About Couscous And Tagine 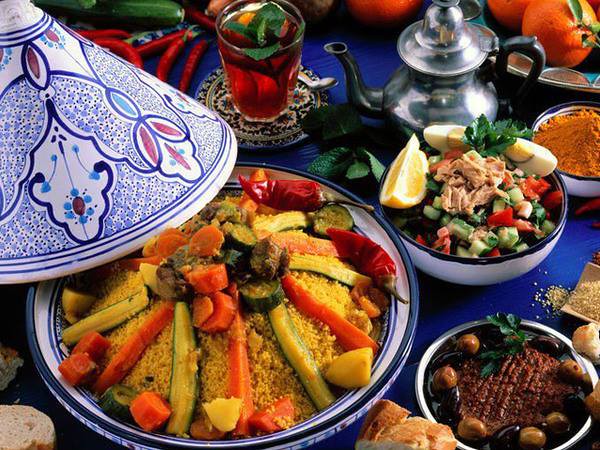 Morocco, which is located on the African continent and has a coast to the Mediterranean, has become the center of attention of the whole world with its traditional and unique recipes. It also reflects different culinary cultures. Moroccan cuisine has been particularly influenced by Spanish and French cuisine. It is a type of cuisine in which spices are used abundantly. In addition, meat products are often included in Moroccan dishes. For those who want to try new tastes and explore different cuisines, this article lists the two most important traditional dishes of Moroccan cuisine: couscous and tagine. Read on to learn more about the best Moroccan Food.

Couscous is originally Moroccan and it is type of pasta traditionally made from hand-rolled semolina. It is cooked with the steam of a meat and vegetable stew. The meat is placed in the middle of the plate. Vegetables surround it. Couscous is placed on top of the meat to form a hill. The sauce is served separately. They usually sweeten it by adding raisins. Traditionally, they prepare couscous on the Muslim holy day (Friday) and on special occasions, but if you go to Morocco you can find it in most restaurants and cafes.

How To Cook Couscous?

Firstly, take one and a half glasses of water in a pan, add bouillon, a teaspoon of salt and a little olive oil and let it boil. After boiling, take the pan off the heat and add a glass of couscous. Then, cover the pan and leave it for 5 minutes. In another pan, melt a spoonful of butter, drain the water, add it to the swollen couscous, put it on the fire, stir for a few minutes, and then set it aside. After that, heat a cup of boiled or canned chickpeas, green beans, sliced zucchini, sliced peppers, and desired amount of seasonings in a wok pan. Finally, you can decorate it with cumin, cardamom and apricot. Bon Appetit!

When it comes to Moroccan cuisine, the first dish that comes to mind is tagine. Tagine is one of the best Moroccan food. It is Morocco’s famous slow-cooked stew served on a clay plate. Cooked together with different types of meat and vegetables and a delicious combination of spices, you can find this dish almost everywhere, at roadside stalls, cafes and fine restaurants.

How To Cook Tagine?

For its service:
– 1 cup boiled chickpeas
– 300 grams of pickles
– 1 bowl of pumpkin puree

Firstly, start by preparing your rice. You can also try the recipe by using couscous. Then, take the semolina and butter in a saucepan. Start roasting. Add water, pepper and salt. After that, turn off the stove when the semolina juice is drawn. Let it brew with the lid closed.

Secondly, for meat; finely chop the red onions. Then, put them in a saucepan and start sautéing with butter on low heat. Saute them this way until lightly caramelized. Then, add the meat and fry. After that, add the broth and all the spices, as well as the garlic, and let it cook. When it starts to absorb the water well, add the prunes, honey and lemon zest and cook for another 5-10 minutes. Then, take it off the stove and let it rest with the lid closed.

After that, spread the rice on the bottom of a serving bowl or large deep serving plate. Then, add the prepared meat on it. Finally, garnish with boiled chickpeas, pumpkin puree and pickles. Then serve. Enjoy your traditional Moroccan meal!

This sweet mint tea is definitely not to be missed. This tea, which you can find almost everywhere, is similar to green tea but with lots of sugar and mint leaves. It is sure to be addictive for anyone who tries it.

In Morocco, tea is drunk before or after a meal. In addition, in case of guests, it can be prepared and served at any time of the day. It has become a tradition for Moroccans to serve it in small glasses.

To prepare mint tea with the classical method, first, heat the water. Then, add five teaspoons of green tea leaves to the boiling water. After that, add fresh mint leaves and let it brew for four minutes. You can also add sugar according to your taste.

To prepare Moroccan mint tea in the pot, first put water in the pot and put it on the stove to boil.
Then add add five teaspoons of green tea leaves. Let it brew for five minutes. Then, strain the mixture. Add mint to the tea you pour into glasses. You can also add sugar according to your taste. Enjoy your tea!