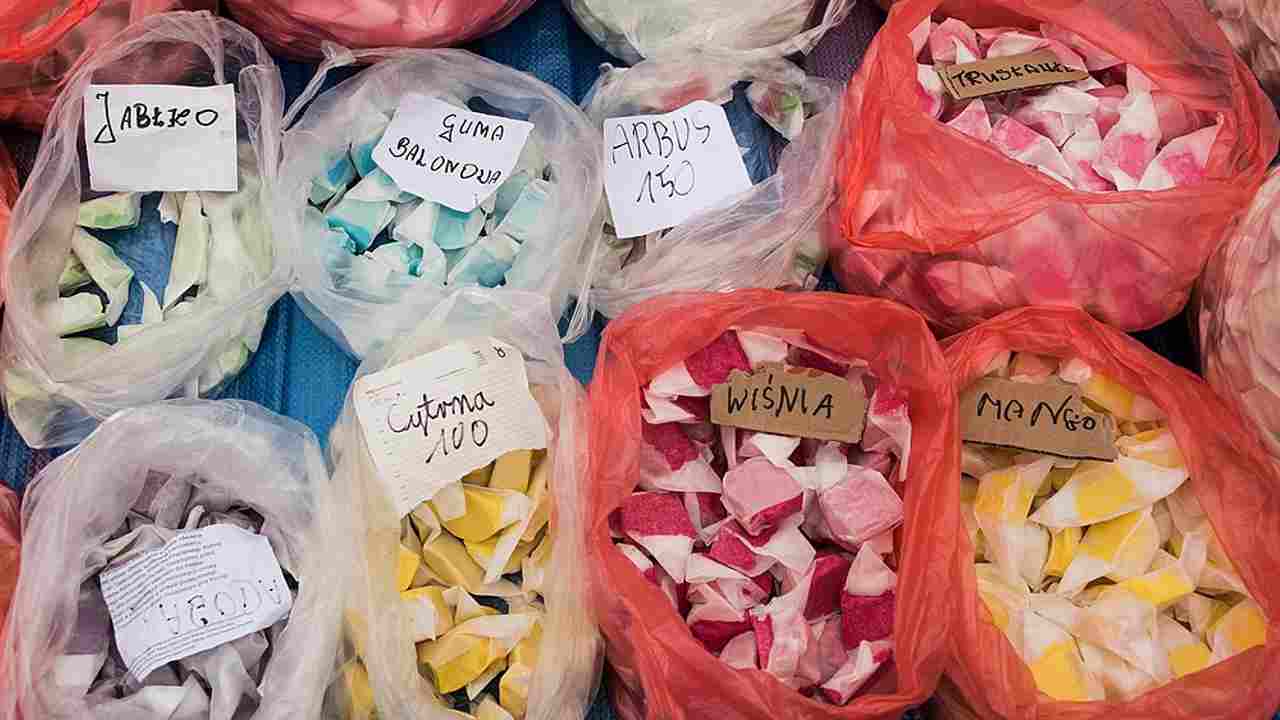 For the Polish people, the first two days of November constitute a period of reflection and remembrance. Around this time, many travel across the country to visit the graves of their relatives. Upon arrival, they are greeted by pop-ups with flowers, decorative vigil lights, and… snacks! The options are limitless, but three of the perhaps most popular and unique ones include pańska skórka, poznańskie rury, and obwarzanki. This article presents their history and ingredients, together with sample recipes. Let’s discover what they are all about!

The citizens of Warsaw cannot fathom the idea of not having a pańska skórka (lord’s skin) while visiting their necropolis. At the beginning of the 20th century, this sugary snack was called panieńska skórka, or maiden’s skin, and was sold as a cough remedy and a treat in pharmacies. The name was inspired by its pinkish color as it reminded people of young girls’ delicate, smooth skin. The reason why the name was changed remains unknown. Perhaps it was just shortened for convenience.

With the original recipe guarded by a few who know it, there is no one recipe to make pańska skórka. The most basic ingredients include egg whites, potato flour, and some kind of sweetener (sugar, honey, or molasses). Mixed with them are various flavored syrups, food colorings, and sometimes gelatin. Some recipes advise adding a dash of vinegar or lemon juice. The finished product has to be soft enough to make a mark with your teeth on it, but tough enough not to bite through it.

Whip the egg whites till you get stiff peaks. Next, mix the rest of the ingredients together until they create a uniform syrup. Put the bowl with egg whites on a bain-marie and pour the syrup on them. Whip it together until it thickens. Then, take it off the steam and continue whipping until it cools down a bit. Put it on the baking paper and let it cool down completely and harden. Now you can cut it and enjoy!

Warsaw is not the only city that can boast about its unique cemetery snacks. Poznańskie rury (Poznan pipes), also oftentimes called dachówki (roof tiles) or trąby (tubas), are sold during this period, as the name suggests, in the city of Poznań. Their exact origin is unknown. The legend goes that those baked goods were prepared by nuns to commemorate a time when an orchestra played so loud during one of the processions, that one of the houses started losing its roof tiles. The same legend gave life to the name trąby – it’s a reference to the loudest instruments in the orchestra.

The name of those gingerbread-like cookies comes from their unusual shape. In the past, rury were bent into a circle, but the shape was changed to avoid breaking them. At present, they are more similar to roof tiles and could be best described as bent squares with serrated edges. The exact recipe is known only to the manufacturers of rury, who guard it with their lives. The main ingredients are wheat flour, water, sugar, and honey.

In contrast to the aforementioned pańska skórka and rury poznańskie, obwarzanki are popular almost all around Poland. Often confused with bagels, those small circles of dough on a string are a brilliant alternative for those who were not blessed (or cursed?) with a sweet tooth. The name comes from one of the steps in their preparation – obwarzanie – which means dipping in boiling water. To prepare them, one needs to combine wheat flour with yeast, water, milk, butter, and a bit of salt and sugar. When it comes to the toppings, they can be sprinkled with salt, poppy seeds, or sesame.

First, crumble the yeast and combine it with warm milk and warm water. Then, sift the flour and add butter and the yeast solution to it. Knead the dough and let it rest for around 20-25 minutes. In the meantime, you can start thinking about boiling your water (you will need it). Next, cut the dough into pieces and shape them into long and thick strings. From the strings, form circles of dough. Put those circles into the boiling water for no longer than 2 minutes. Take them out and place them on a baking tray lined with baking paper. Put some egg wash on them and sprinkle them with your topping of choice. Finally, bake them till golden brown (around 20 minutes, at 200 degrees). Enjoy!

All in all, it is worth noting that although selling snacks is becoming more and more popular also in smaller cemeteries in Poland, it is in the biggest ones that it usually takes place. Moreover, this practice is not universally accepted since it has as many advocates as it has adversaries among the Polish people. Some say that selling food in such a place should not be allowed, others say “Why not?”.  After all, who says that death cannot be sweet?

And what about your country? Can you buy any food in your cemeteries? What do you think about such a tradition? Let us know in the comments!