What is gołąbki? Not birds but traditional Polish cabbage rolls: history and recipe 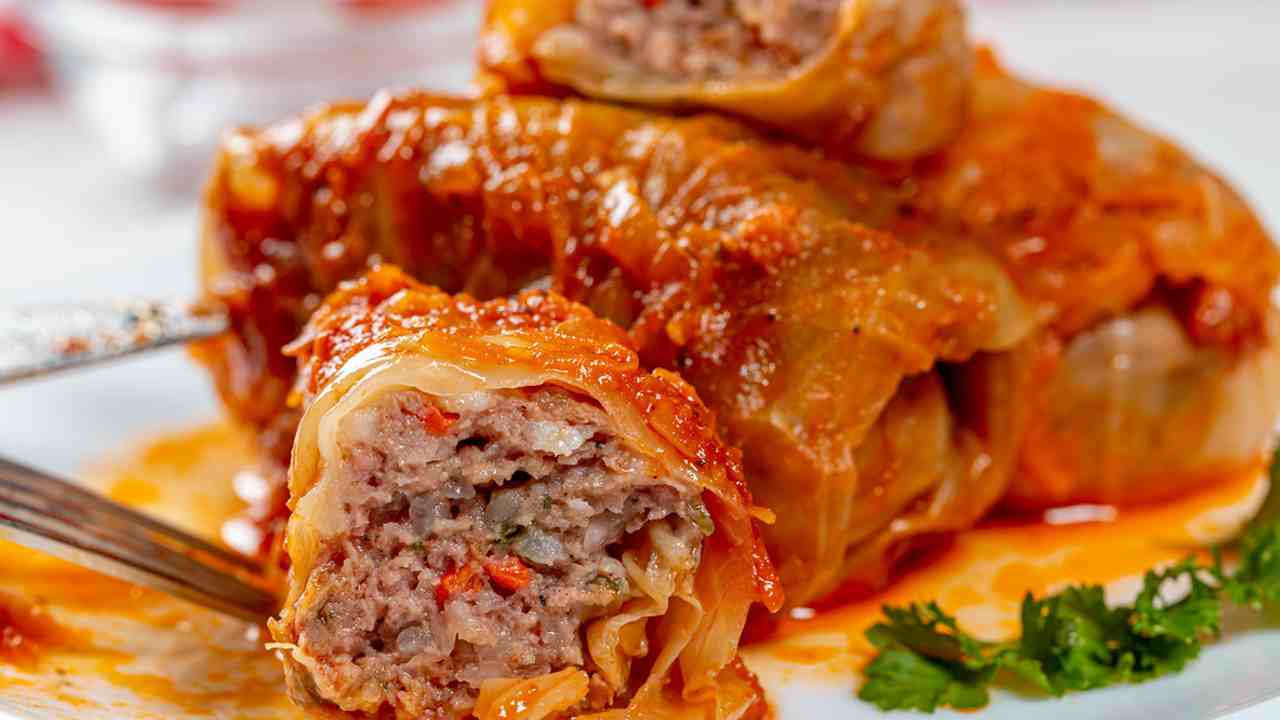 Gołąbki is a dish which consists of stuffing covered with white cabbage leaves in the shape of rolls, usually served with tomato sauce, and its name is exactly the same as small pigeons in the Polish language. Cabbage is qualified as an excellent vegetable for the purpose of stuffing. In some recipes, the leaves are divided and stuffed separately, while in others, the whole cabbage head is cored and filled with stuffing. Here we will focus on separate leaves, which connected with various types of ingredients, create a famous Polish dish – gołąbki.

The typical current ingredients of the stuffing are minced pork meat and groats or rice and additional ingredients, such as onion, mushrooms and spices. Other variants of the filling may contain poultry meat, mutton or a vegetarian versions. Before serving, gołąbki are stewed or fried.

Where did gołąbki fly from?

Poorer inhabitants of Central and Eastern Europe are usually indicated as genuine inventors of gołąbki due to widespread cultivation of cabbage in this area in past centuries. However, currently the only traditional thing that has left, is the way of enwrapping the stuffing into cabbage leaves, because the stuffing itself, which originally consisted of buckwheat groats and potatoes, qualifying greatly for a Christmas Eve dish, is now usually served with meat.

In the Eastern Borderlands, which used to be a part of Poland, roasted gołąbki are wrapped into pickled cabbage leaves, usually served as a Christmas Eve dish. For the Christmas Eve, they are prepared with buckwheat groats, while during the rest of the year, the groats is accompanied by minced meat. After enwrapping, they are baked in a closed vessel.

Some theories suggest that the dish was borrowed from France, where an exquisite dish from stuffed pigeons was eaten. The meat was enwrapped into cabbage leaves in order not to get dry during roasting. According to this theory, Polish gołąbki is a substitute for this luxurious dish from French courts.

Ambiguities concerning the name and origin

There is no clear-cut answer to why the dish was named gołąbki. The name could have been zrazy, zawijańce, or ruloniki in Polish, which would make more sense and would refer to the nature of the dish. Some etymologists claim that the name was derived from the Middle East together with the dish itself. According to the National Center of Culture, pigeons were assigned such features as strength and purity, in contrast to present times. Moreover, eating it with groats and meat was supposed to foster people’s sturdiness.

Another curiosity is the fact that although it is frequently categorized as a Polish dish, a number of other Slavic countries have a similar recipes in their traditional cuisines. In the Czech Republic and in Slovakia, it is called holubce, while in Ukraine, Russia and Belarus, it is галубцы (pronunciation: holubtsi). Although there are differences in spelling, the pronunciation of all of them is very much alike.

Finally, Max Vasmer adopts the theory that the etymology of the name is literal, meaning that it derived from the word “gołąb”, which means pigeon, being supposedly similar in shape to this bird.

Although the are disagreements when it comes it its name and origin, the dish is worth trying! Below, you will find the recipe.

Put meat into a big bowl. Cook the groats, cool it and add to the meat. Peel the onion, grate it on a grater and add to meat and rice. Grind the garlic and add to the rest of the ingredients. Add all the spices for the stuffing, then mix everything and knead it with your hand. Afterwards, form small rectangle shape chops.

Cut out the heart of the cabbage, then put it into a big pot with boiling water (the cut side should face the bottom of the pot) and cook for around 10 minutes on low heat. Turn around the cabbage and cook it for 5 minutes. Take the cabbage out from water and after cooling it, separate the leaves and cut out gently all the protrusions.

Cover the bottom of a big and wide pot with a few cabbage leaves. Place the cabbage rolls on it. Boil the stock in another pot and pour it over on the rolls. Place it on a stove, cover it with a lid and cook for around 45-60 minutes until the cabbage is soft. Do not stir the rolls during cooking.

Gołąbki brew pour into another pot. Add passata and flour (mixed before with a few cold water spoons), boil it, add the spices and cook it for 10 minutes without the lid. Add the sour cream and stir it. Add ready tomato sauce to the pot with gołąbki, cook it for a few minutes on low heat, shake the pot gently from time to time in order to distribute the sauce evenly.

Gołąbki is a typical homemade dish. You will not find it in sophisticated restaurants, because it is considered as a crude dish, not worthy of a superior dining table. Although you can encounter them in cheaper bars, it is often tasteless due to the meat quality. But you can prepare this simple and delicious meal by yourself, and it will be a great dish for a family dinner or everyday lunch.