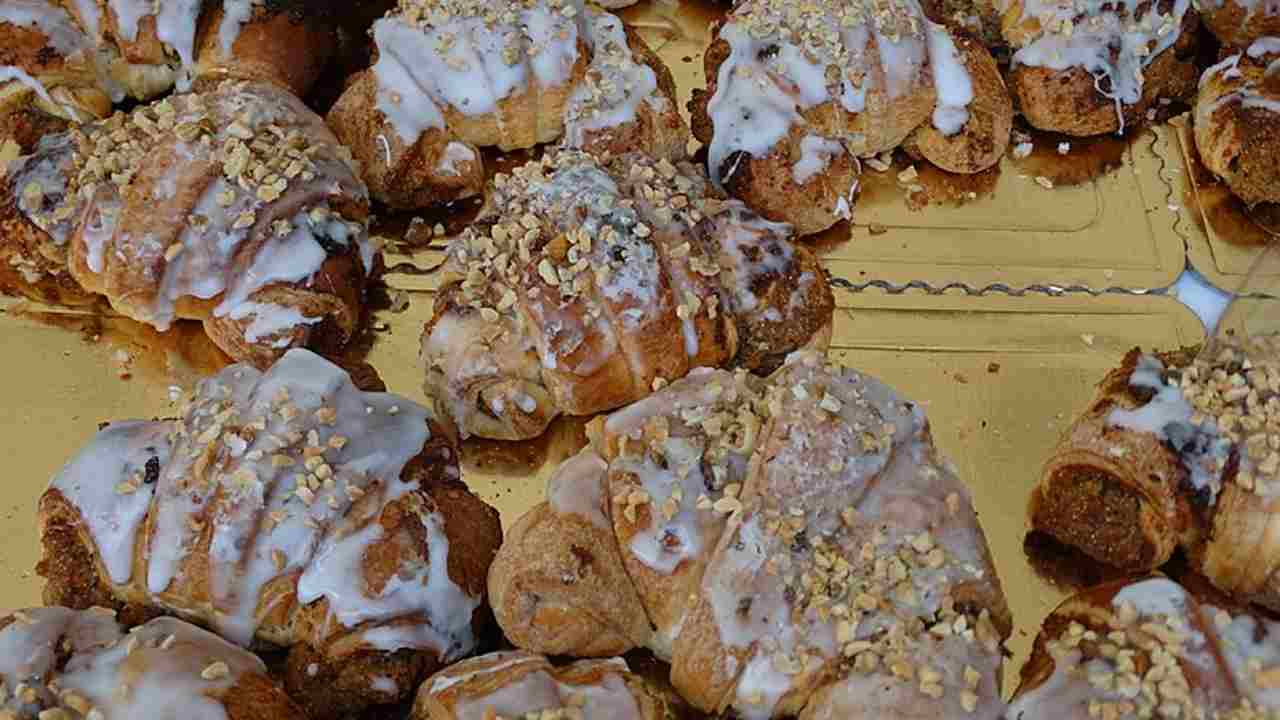 For many Polish people, the 11th of November is just a day off. Some see it as a day with a possibility of sleeping longer and spending the day in front of TV. However, in Poznań, the capital of Greater Poland Voivodeships, it will be different. In this city, the Independence Day is the time of great joy and entertainment. And an occasion for sweet gluttony!

What is this fuss about?

Rogal świętomarciński is a traditional Greater Poland delicacy in shape of a horseshoe. Those sweets are made from puff pastry and filled with ground white poppy seeds and dried fruits. After taking out from the oven, they are sugarcoated richly and decorated with nuts.

In Poznań and its surroundings, as nowhere else, the topic of the Independence Day is hot long before the 11th of November. Last week before this day, there is a culmination of discussions focused on rogale świętomarcińskie. Poznań inhabitants exchange opinions on where to get the best rogale. There is always a heated discussion about which pastry shop overshadows the rest. Everyone has their favorite flavor and everyone is an expert how the genuine and perfect rogal should taste like.

A few days before the day, certification of rogale świętomarcińskie takes place. Only when a pastry shop obtains the certificate, can it use the name “rogal świętomarciński”. For it is a regional product protected by the European Union law. So, if you are in Poland and get this tasty delicacy in a tiny shop around the corner named “rogal marciński” or “rogal poznański”, you must know that it is not a genuine certified rogal świętomarciński. Even if it is delicious.

Rogale świętomarcińskie used to be available solely around the 11th of November. Although today those goods are available all year round, the demand for them does not decrease around the Independence day. Customers wait in queues for hours, and in Poznań itself, pastry chefs bake around 200 tons of rogale.

Where did rogale świętomarcińskie come from? The beggar and the coat.

According to the legend, in the 4th century, Święty Marcin (Saint Martin) of Tours, who was a Roman legionary, met a half naked beggar. He took off his coat, tore it in half and gave it to the beggar. One of bakers from Poznań heard about this story and was moved by the saint’s benevolence. Therefore, he decided help the poor too. He found a horseshoe on the street, which according to the legend belonged to the Saint Martin’s horse and decided to bake something sweet of similar shape in order to hand it round to the poverty-stricken people.

Another story says that Józef Melzer was the aforementioned baker, who encountered horseshoe used as an idea for the treat. A day before church fair, he supposedly heard the clatter of horse’s hooves on the highroad. He looked out from the threshold and spotted a knight in a shining ancient armor. The whole night, he was baking cookies stuffed with white poppy seeds and dried fruit formed in shape of a horseshoe, or in shape of crescent, as others argue. In the morning, after the mass in the parish of Saint Martin in Poznań, he handed all the rogale around.

People liked the idea so much that he started baking rogale every year. After his death, other pastry chefs and bakers took over the idea, preserving the recipe and passing it from generation to generation.

So, let us see the mysterious recipe!

Mix wheat flour with dry yeast (if you have fresh yeast, you have to prepare leaven first), add the rest of the ingredients for the dough, the 30 g of butter should be added at the end. Knead it shortly, just to connect the ingredients. The dough just stay cool. Form a rectangle and cover with plastic wrap. Put it into a fridge for 1 hour.

Roll the cooled dough on the table until you reach the size 30 x 15 cm. The shorter side should constitute the top and the bottom. Spread the rest of the butter on the dough. Fold 1/3 of upper dough toward the middle, and then, the bottom part as well, so that it covers the rest. Gently roll the dough and fold it again as before. Cool it in the fridge for 45 minutes. Repeat the process 3 times. After the last rolling, keep it in the fridge for at least 5 hours.

For the filling, blanch the poppy seeds and nuts. Strain after 15 minutes. Grind it with almonds. Blend the marzipan mass with the confectioner’s sugar. Add ground poppy seeds, nuts, sponge biscuit crumbles and orange peel, sour cream and mix it.

Roll the dough and cut it in half along the longer side. Cut each stripe into 12 triangles. Place the filling onto triangles. The bottom of the triangle wrap toward the middle, bend out the sides and form a crescent-shaped or horseshoe-shaped rogale. Place it on the baking tray, cover with a cloth and leave for 1 hour (until rogale double their size).

Well-risen rogale cover with the spread of an egg and milk and bake for 30 minutes in temperature of 180°C. After baking, decorate warm rogale with the frosting and sprinkle walnuts and almonds on it.

Rogale świętomarcińskie is a traditional Polish delicacy which receives a lot of attention and arguments around the Day of Independence in Poland, being considered as a symbol of this celebration. Although rogale will not be considered as official certified treats when prepared at home, you can easily bake it by yourself and enjoy sweet gluttony no less.