Pączki, the Polish spin on doughnuts: how to make them? | History and recipe 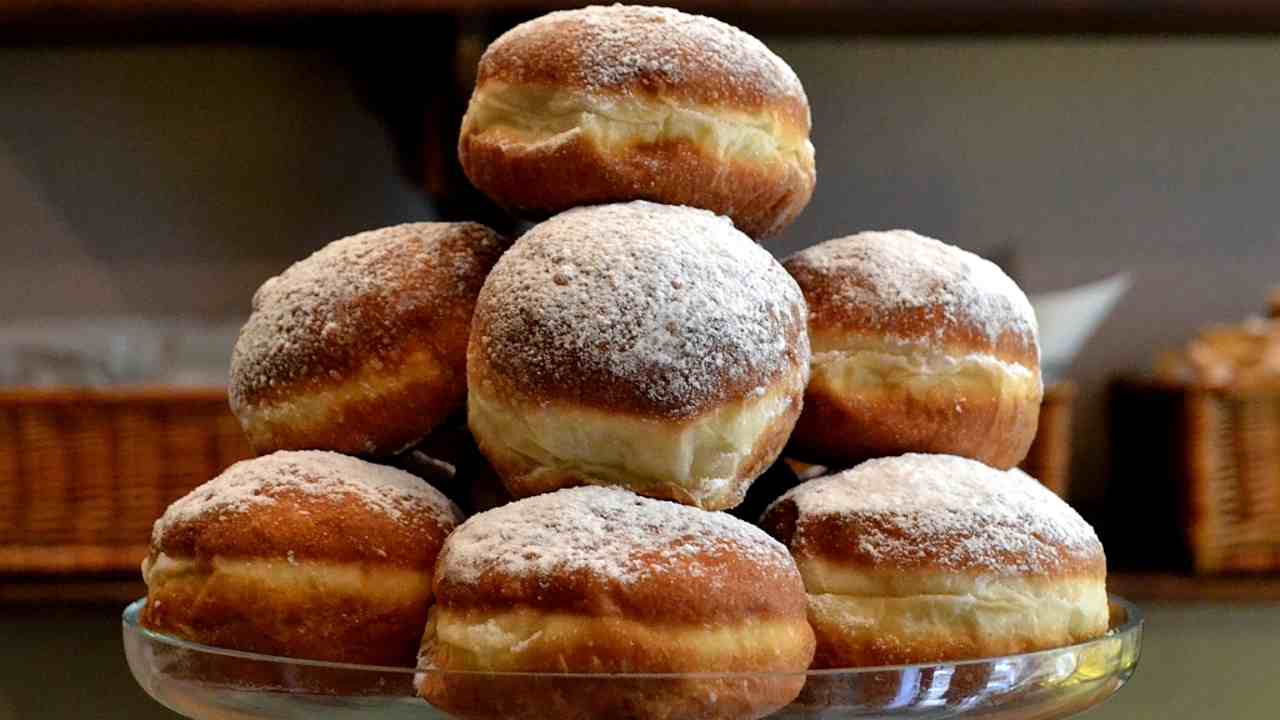 Pączki – around 60 grams of round yeast dough filled to the brim with whatever you can imagine: rose or fruit marmalade, custard, chocolate, and sometimes even quark. The top can be iced or dusted with powdered sugar. They are widely popular all year round, but on one day every year, Fat Thursday, their consumption skyrockets. On this single day, Poles devour about 100 million such sweet confections in order to avoid bad luck (no pączek on Fat Thursday, no luck for a year).

The Fat Thursday tradition may originate from pagan times. At that time, people used to celebrate the end of winter and the arrival of spring by, among others, overconsumption of fatty foods. As hard as it may be to believe, doughnuts existed at that time. Well, sort of. They were not pączki as we know them now, fatty and sweet. Instead, they were spicy and/or salty treats made from bread dough stuffed with pork fat or bacon. Such a version was eaten, for instance, in ancient Rome.

From Savory To Sweet

In Poland, doughnuts were known as pampuchy or kreple as early as the 12th century (the latter name is still used in Upper Silesia). Similarly to ancient Rome, the hard dough was fried and stuffed with pork fat. As a topping, people used an additional pork crackling. Such delicacies were prepared especially for the time of zapusty, or carnival, and consumed alongside vodka.

The first sweet, honey-coated version of doughnuts appeared in Europe at the end of the Middle Ages. Perhaps we owe this occurrence to the influence of Arabic cuisine. In Poland, the beginning of the Renaissance brought about a new custom; Polish housewives began stuffing doughnuts with nuts or almonds. Why? For good luck! The person who found it was believed to be granted happiness and success.

The change in taste, however, did not go hand in hand with a change in the hardness of the dough itself. It still resembled bread more than the delicate confectionery product we know today. It was only with the addition of yeast in the 18th century that the dough softened and took on its characteristic lightness and springiness.

Around the 18th century, doughnuts also acquired their round-ish shape. It is said to be due to the Viennese pastry shop owner Cecilia Krapf, who, during a heated argument with her husband, allegedly threw a ball of raw dough at him. The wretched man dodged the “bullet” and the dough landed in a pot of hot fat. Another legend mentions a Berliner who dreamed of a military career. He did join the army, but due to his weak health, he could only serve in a field kitchen. Undeterred, he decided to convey his love for the army through his cooking: he fried a sweet cake filled with fruit that looked like… cannonballs!

You can find different types of doughnuts all around Europe. German berliner pfannkuchen is a lighter cousin of pączki which spends just a few seconds in the hot fat, and is usually either dusted with powdered sugar or topped with icing. Italians fill their bomboloni with chocolate or vanilla cream, or even ricotta. In Israel, sufganiot, a sweet yeast dough, is traditionally fried for Hannukah. Meanwhile, the Turks are fond of lokmas, eaten year-round. These small round balls are doused in honey or sugar syrup. You can encounter similar doughnuts in Greece (loukoumades), where they are additionally sprinkled with nuts and cinnamon.

Apart from Poland itself, the Polish version of doughnuts is more widely known also in Israel (thanks to Polish Jews), Russia, and the USA (thanks to large Polish communities that live there).

Below, you’ll find a recipe for those sweet treats (should yield 25 pączki):