Bigos, everything about the iconic Polish cabbage stew | History and preparation 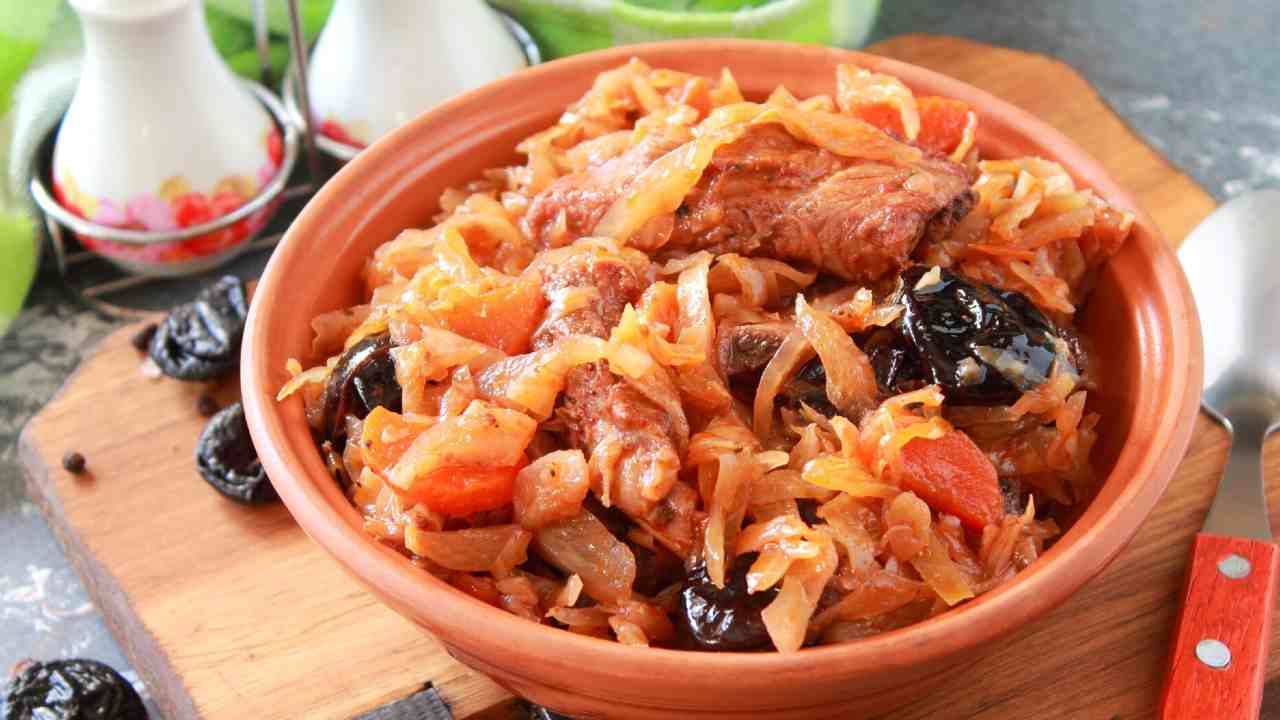 In Poland, winter is slowly approaching. The days are getting shorter and the nights longer. When the temperatures fall under 0 degrees, all one can think of is a warm blanket and comfort food. And nothing warms you up like a hot plate of hearty and moreish delicious bigos, a stew made mainly of chopped meats, sauerkraut, and shredded fresh cabbage with various other ingredients.

The fascinating history of this dish begins with its name. With uncertain origins, there are many speculations about how to explain bigos. Jerzy Bralczyk, a famous Polish professor, derives the word from Beiguss (sauce), an archaic German word. Similarly, some link it with German begossen (basted or doused). Others claim that the name refers to the two tastes, sour and sweet, that one can feel while eating this dish (from Latin, bi – dual, gos – taste).

Originally, the name bigos applied to all dishes with chopped ingredients. Therefore, it included dishes made from meat, vegetables, and even fish. A little later, bigos referred to chopped meats and fish in aspic (a jelly made out of animal bones). Since the 18th century,  bigos pertains to a dish that consists of cabbage and meat.

Curiously, a similar term used to be employed for chopping something with a saber. Something or someone as the etymology is not explicit with it. For this reason, assuming that bigosować meant quartering your opponent with a blade is not beyond the realm of possibility. After all, it is not a coincidence that the ironic phrase niezły bigos (nice bigos) refers to confusion, butchery, mess, and disorder.

In English, bigos is often translated into hunter’s stew. It does make sense because bigos can be both prepared with game meats (hare, wild boar, or deer) as well as was, and often still is, taken in jars by people on their hunting trips to snack on.

How to eat it

Despite being more of an appetizer than a main course, bigos is often treated as an important part of, for instance, a dinner due to the fact that it takes so long to make it. Similarly to żurek, you can serve it with or in bread and wash it down with a glass of dry alcohol that will help digest the dish.

If you do embark on the quest to prepare bigos, be ready to spend quite some time doing it. Cabbage with meat is stewed for a long time, sometimes even several days, until all the ingredients form a dark, aromatic, and uniform mass. This is what true bigos is all about.

Bigos does not lose its flavor even repeatedly reheated. You can freeze it and store it in the refrigerator for several weeks!

Bigos has evolved throughout the centuries. In each Polish home it is cooked according to its own proven recipe, sometimes passed down from generation to generation. Thanks to this variety, its taste is always different.

The most important ingredient of bigos is cabbage. Two types of it, to be exact: fresh and sauerkraut. Sometimes, only fresh cabbage or sauerkraut is used. You can rinse the sauerkraut or even cook it beforehand so that it is less sour but I do not recommend it; then the dish loses its authenticity and character. The cabbage ought to be finely shredded and simmered in a pot with a small amount of water.

When it comes to meats, they are not as important. You can skip them or add tofu. Traditionally, however, the Polish add to it smoked sausage, leftover roasted beef, pork, or venison. As I mentioned before, you can also find a version with game meats and juniper berries considered the finest one. Yet another variety has finely chopped pork fat, preferably smoked. The very distinctive flavor of bigos is caused by the addition of smoked prunes, dried mushrooms, and quite a few spices (pepper, allspice, marjoram).

Although according to some the amount of meat and cabbage should be more or less equal, it is far more common to prepare this dish with bigger amounts of the latter. After all, cabbage is cheaper.

To greatly enhance the flavor of bigos, some add dry red wine during stewing. Adding some very sweet wine won’t hurt the dish either as it can replace honey, a modern twist to the old recipe.

Old Polish cuisine was also known for the so-called bigos with a cheer. A cook would prepare a pot of bigos beforehand, then cover it with a lid and tightly seal the top with dough. The whole thing was cooked over a campfire. When the lid shot up under the pressure, the stew was ready to eat.

There are also some international variations of this dish. Sour apples, for example, are added to Lithuanian bigos to enhance the sweetness of the dish. Hungarians, on the other hand, season their version with hot paprika and cream. In Galicia, a bigos-like stew was, and sometimes is, enriched with potatoes and white beans.