The quintessence of Polish cuisine: pierogi | History and recipe 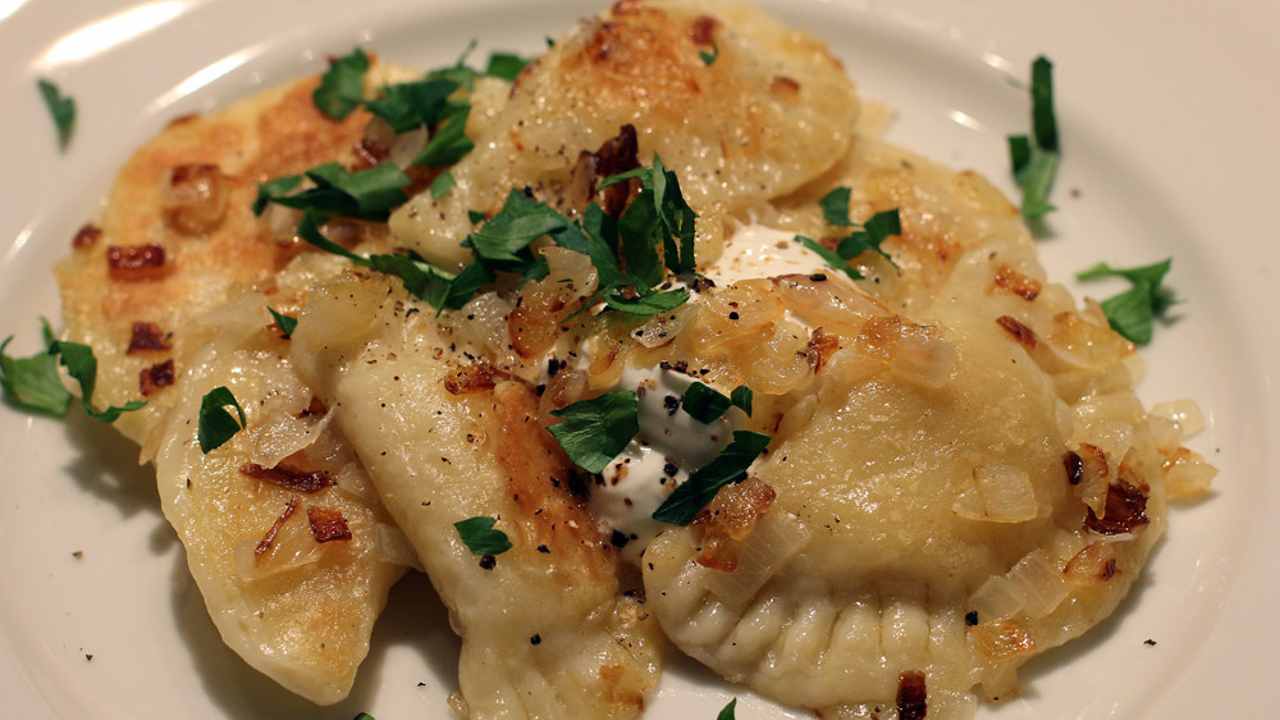 If you’ve ever heard anything about Polish cuisine you must have heard about pierogi. No matter whether pierogi’s traditional origin comes from another corner of the world, it is unquestionably the most famous Polish dish and adored by many.

Pierogi are filled dumplings made by wrapping unleavened dough around a savory or sweet filling and cooking in boiling water. They are frequently fried on a pan before serving. In Slavic tradition, pierogi were bakings destined for piru, i.e. feasts. Originally, they were baked mostly for special occasions and holidays.

Pierogi and their varieties are usually associated with the cuisines of Eastern, Southeastern and Central Europe. Dumplings most likely originated in Asia and came to Europe via trade in the Middle Ages. The widely-used English name pierogi was derived from the Polish language. In some parts of Eastern Europe they are known as varenyky. This dish is also popular in modern-day American and Canadian cuisines, where they are sometimes known under different local names.

Typical fillings include potato, quark, cheese, sauerkraut, edible mushrooms, ground meat, and fruits, such as strawberries or bluberries. Savory pierogi are often served with a topping of fried onion, cracklings with grease, or in case of fruit variants, prepared for desserts, with sweetened sour cream.

The English word “pierogi” comes from Polish pierogi, which is the plural form of pieróg, a generic term for various types of filled dumplings. The term derives from Old East Slavic пиръ (pirŭ) and further from Proto-Slavic pirъ, meaning feast.

While dumplings as such are found throughout the whole Europe and Asia, the specific name pierogi, shows the name’s common Slavic origins. In most of these languages the word means “pie”.

In Slovakia, bryndzové pirohy are popular, and the term means dumplings filled with sheep milk cheese. The name for filled dumplings used by Romanians is colțunași. The word derives from Greek καλτσούνι, kaltsúni, itself a borrowing from Italian calzoni.

The history of the pierogi is debatable, as the exact origin of the dish is unknown and hardly verifiable. There are people who believe that some kind of prototype of pierogi was imported from the Far East. As a matter of a fact, going back a few hundred years ago, one can find information about quite a similar food being eaten in China. Therefore, they argue that was the country where the pierogi originated from, and afterwards, they “traveled” to Europe during the Middle Ages or later periods. Those dumplings are also believed to have been popularized Marco Polo’s expeditions through the Silk Road, finally reaching Italy. This theory suggests a relation to mantou, a Chinese steamed bun.

According to other sources, in the 13th century, the pierogi were brought by Saint Hyacinth of Poland from the Far East via what was known as the Kievan Rus’ at the time. They became characteristic to Central and East European cuisines, where different varieties, including varied preparation methods, ingredients, and fillings were invented.

In Poland pierogi have been made since the 13th century. Its name appeared for the first time in Polish cookbooks in the 17th century. Traditionally considered peasant food, pierogi gradually gained popularity and spread throughout all social classes, with the nobility being no exception. At the time, pierogi were exclusively prepared during the holiday season and each holiday had its own kind of pierogi assigned.

Pierogi prepared for weddings were called kurniki and were filled with chicken meat. Knysze were made for mournings  and served during wakes. In January, which was a period of Christmas caroling, people baked pierogi known as koladki.

Pierogi are an essential dish during the Christmas Eve in every Polish family. For this purpose, they are stuffed with potatoes, cheese, cabbage, mushrooms, buckwheat or millet. One of the most popular types are the Biłgoraj pierogi, stuffed with buckwheat, potatoes and cheese and then baked in the oven. Pierogi are also served during public events, on markets or festivals in a variety of forms and tastes, ranging from savory to sweet.

Undoubtedly, the most famous ones are pierogi ruskie, which literally means “Ruthenian pierogi”. This type is also widely known abroad. These pierogi are filled with fresh quark, boiled and minced potatoes, and fried onions.

Peel, cut and boil your potatoes. In the meantime peel and finely dice the onions as small as possible. Once you stop crying over how beautiful you cut your onions, you can throw them in a pan and fry until they become translucent. Afterwards, mince the boiled potatoes.

When potatoes and onions have cooled, mix everything with the quark (or curd cheese or Farmer’s cheese). Season it with salt and pepper.

In order to make the dough, mix flour, water, and salt. First, knead it in a bowl, and then continue on a Don’t add all the water, go with about 150 ml at first, then add more if needed. Do that in a bowl until it all comes together, then continue on a clean table or a countertop.

Roll the dough until it’s about 2 mm thick. Cut out circles with the diameter of about 8 cm. You can use a cup or a glass for it. (mine were 7,5cm in diameter). Place a tablespoon of the filling onto a circle and fold the dough into a half moon shape. Then, press the edges together to seal the filling in.

Having boiled the salted water in a pot, gently lower the dumplings into it. Boil the pierogi until they float to the surface and then fish them out. For the serving, use fried translucent onion. Enjoy!