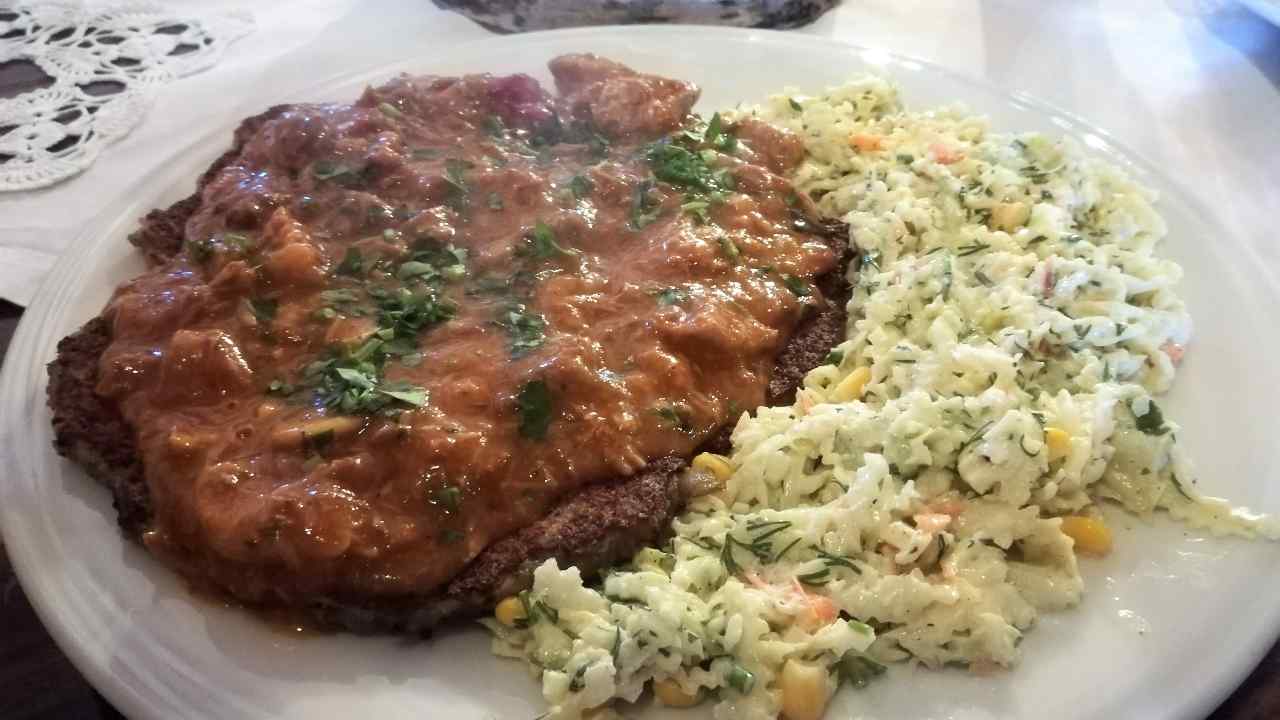 Life in the mountains is a tough nut to crack, thus to obtain ingredients or spices was not a simple task. Therefore, highlander’s cuisine is based on products that are easy to get, available on site. Nevertheless, it will astonish you with taste and make you full. In highlander’s recipes, we will find simple dishes made with cabbage, potatoes, flour, as well as residues from cheese production – such as whey from goat milk. And obviously traditional bread substitutes, that is to say highland cakes.

What is placek po zbójnicku?

Placek po zbójnicku is a big potato pancake (Polish: placek ziemniaczany or placek kartoflany) traditionally served with meat goulash poured over and folded in half, which Polish cuisine is famous for. It is if soft inside and crispy outside.

Another name of its dish is placek po węgiersku, which literally means Hungarian potato pancake, but the name is misleading, because you will actually not find it in Hungary. Neither does it come from there. You can notice Hungarian influences though, i.e. the topping which the potato pancake is richly covered with comes from Hungary. This delightful dish comes from Podhale (Polish Highlands), which is located on the border of Poland and Slovakia. Back in time, Slovakia was under Austria-Hungary influence, which most likely influenced the name, although there is no evidence of this.

Traditionally, Catholics eat potato pancakes on Fridays during Lent as a meat substitute. Many cuisines have their own versions of potato pancakes, including Jewish latkes, Czech bramboráks, and Lithuanian zeppelins. They offer a rich source of protein and are delicious on their own or as a side dish, even outside of the Lent season.

Placki ziemniaczane was a food staple at monasteries in the 17th-century Poland, According to written recipe by Stoczek Warmiński, placki ziemniaczane were prepared with one onion, two eggs and a spoonful of wheat flour per each kilogram of potatoes. The only seasoning used were salt and pepper.

In times of economic difficulties on Poland lands, during the foreign partitions, potato pancakes frequently replaced missing bread among the peasants. The lower-quality crops given to field laborers were turned by them quickly into pancakes in order to improve taste and prolong its freshness. Moreover, their popularity is associated with the historic presence of one of the largest Jewish communities in the world flourishing in Poland.

Although a number of Americans associate potato pancakes with Hanukkah, the Jewish Festival of Lights, they have more broad origins. They originated in the European countries of Germany, Austria, Russia and Poland as peasant food. Potatoes were cheap, plentiful and easy to store, which resulted in creating inventive potato recipes.

The confusion may be caused by its similarity to Jewish latkes, since they also use potatoes and eggs as the main ingredients. Latkes, however, also include baking powder, matzo meal, and even milk. Potato pancakes usually do not contain these ingredients.

Below you can find a recipe for this delicious highland dish. Since Poland is becoming vegetarian in an unprecedented pace, the recipe presented will be slightly “broken”. This time we will not play by the  rules.

Heat the oil on a large frying pan. Place some of your mixture on the pan (the size of a 2/3 dinner plate) in order to achieve a pancake. Fry until it becomes golden brown on both sides. Use up all your batter.

Heat the oil in a big frying pan over medium heat. Add the onion and fry for about 10 minutes, until the onion softens. Then, add the celery and garlic and fry for another 5 minutes.

Pour in the chopped tomatoes and a tomato water from the can. Add the tomato paste and the vegetable stock. Drop in the thyme, bay leaf, salt and pepper, cover with the lid and leave to simmer on low heat for about 30 minutes.

Add the bell peppers and cannellini beans, then leave to simmer for another 10 minutes. By that time, the sauce should be thick. At the end, add the parsley.

Place the potato pancakes on dinner plates, cover richly with the goulash and fold in half.