Although Lithuanian, still Polish | History and recipe for the chłodnik litewski aka cold beet soup 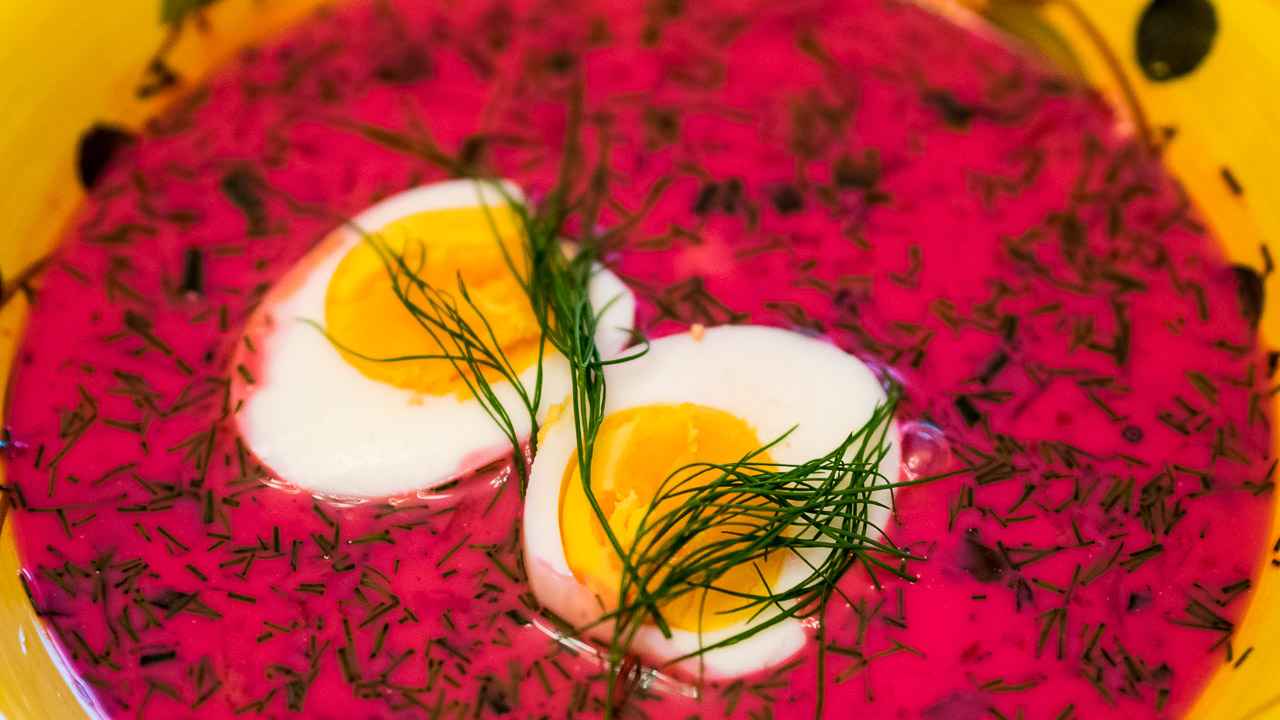 Chłodnik litewski is the traditional and refreshing Polish cold soup, which is a delicious promise of relief during the warm days of late spring and summer.

This cold beet soup is pretty thick, pleasantly sour and of course cooling. It’s full of young beetroots, including their green parts, herbs, such as dill and parsley, and crunchy slices of fresh vegetables, such as radish and cucumber. An essential ingredient of the soup is also a boiled egg, halved or quartered, gently floating on the surface.

Chłodnik litewski is in fact both. The history of this soup reaches as back as to the 14th century, when the Jagiellonian dynasty ruled in the Polish–Lithuanian Commonwealth. The old-Polish cuisine spread to Lithuania, and vice versa, the Lithuanian flavors spread back to the Crown.

This delightful dish comes from the region of Podlachia (Polish: Podlasie). The vicinity of Sejny county continues to have a large Lithuanian minority. For this reason, many of the regional dishes are heavily influenced by the Lithuanian culinary arts.

In may 2016, ‘Chłodnik Litewski’ was listed on the traditional product list of the Ministry of Agriculture and Rural Development, in the Podlachia Voivodeship.

Chłodnik litewski is incredibly quick and easy to make. The only ingredient you need to cook is beetroot. If even this seems too troublesome, or you can’t source fresh, raw beetroot to cook, you can simply use the cooked one that is now widely available vac-packed in the vegetable section of the majority of supermarkets.

The most difficult aspect of making this soup is probably searching for the kefir milk. Unfortunately, while easily accessible in many Eastern and Central Europe countries, kefir is not available in all supermarkets in other countries. But you may find it at Lithuanian, Polish or Russia food stores. Alternatively, you can substitute it with yoghurt and buttermilk.

The first mention of the chłodnik litewski in literature comes from the Polish national epic “Pan Tadeusz, or the Last Foray in Lithuania” by Adam Mickiewicz:

[..] servants entered in pairs; their trays were full

of food: first soup was served in great amounts —

prepared with skill as in old Polish times.

Into this broth, the Seneschal throws both

tiny pearls and a golden coin, which chimes

against the pot. Such broth, it‘s often said,

fortifies the health, purifies the blood […]

How and what can you serve the chłodnik litewski with?

This Cold Beet Soup is normally served on its own, as a complete dish: for a light, summer-time lunch. It’s frequently served with:

Despite being a cold soup, it also makes a fantastic autumn lunch. It has a mild taste but is quite hearty thanks to the amount of solid ingredients. šaltibarščiai, as it is called in Lithuania, is traditional served with a side of warm, boiled potatoes. However, you can replace these with a slice of rye bread or your favorite crusty loaf, as you prefer.

The soup has a shocking bright pink color owing to the natural beetroot juice. It also has incredibly fresh taste due a very most crucial ingredient of the cold soup, kefir, which is recognized by nutritionists as one of the healthiest products in the world.