Anime and Cartoon at the Surface of a Dish 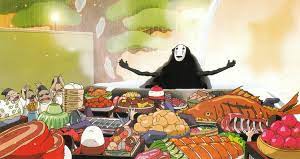 Most of us wonder when are we going to be able to meet our favorite characters from movies, cartoons, or even Anime. The opportunity of greeting or exchange a word with your favorite heroine or hero might sound like an exciting dream that you might come across after a wonderful night, yet the dream to some never come. Though, from the age that did not believe in the impossible stands in the attempt to recreate a world closer to that of our heroes or at least shapes certain elements from it. Such an experiment was under the premise of recreating certain dishes featured in movies, cartoons, or even Anime. These trials came to justify the immense want to keep a real bond with the actual virtual world. This move drastically altered the world of gastronomy and opened the door for this nuance to be implemented. A tending pattern that was, later on, shared from one country to another and from one creator to another building tight competition of becoming the number one creator. This new habit became a part of a worldwide culture that is mainly spread around Asian countries. And due to the presence of multiple platforms that offer the service of taking short videos with various side effects such as Instagram reels, TikTok, and Snapchat, the trend was easily shared and adopted by people. Some people assumed that this trend came out of a total obsession with the virtual content as there was no real threat to be taken and the situation just overloaded to the real-life, focusing on the fact that it is not a negative attribution. To what extent this opinion is accurate would be tested in this article in fewer instances.

Anime Sweeping into the Gastronomy Universe

The aesthetic representation of things tends to be the most appealing force that draws people’s attention to something and certain Anime creates these colorful well-designed images. Everything produced in an Anime is well structured and created to be appealing from the physical side of characters to the food created, raising the ratings and views of such content. Food shared on various episodes of Anime always stimulates this rush of hunger and want to have or try something similar in reality, the variety of colors, the shiny structures, and nourished well-presented ingredients add to fuel the desire. This obsession was fulfilled when individuals took their time and effort to re-create the food shared in scenes in real life. This move was rewarded by the very high rates of approval as it was welcomed by millions of people with hundreds of likes shared on social media. Naruto is one of the fans’ favorite anime because it is considered an original and a must-watch puts forward the dish of Ramen with Narutomaki dish as a marvelous meal to try. It is mostly composed of Japanese noodle soup flavored with either soy sauce or miso and uses chicken or pork as a topping, but also it includes slices of Narutomaki which is a fishcake round pink swirl circles.

This dish can be the charm with its special spell, and it pushes most viewers into trying it at home and making it part of their lifestyle. On the other side, dishes like Lunch Box either from the Anime “My Neighbor Totoro” or “Up On Poppy Hill” both composed of rice as an essential part of the dishes, the first dish includes fish some vegetables which makes it simple yet leaves the freedom for a personal touch, whereas; the second dish is presented with sausage, dried small shrimps, a bit of sugar, preserved vegetables, eggs, and milk.

Above all, no one can resist nor forget the tempting delicious breakfast from “Howl’s Moving Castle” that is consisted of bacon and eggs simple yet very appetizing meal as the production of the Anime steals the minds of everybody with the quality of the work presented.

From Asian Anime to Cartoon Series in America

As the trend started in Asia, the video has spread around every screen of world users targeting various backgrounds, cultures, and races bringing this revolution of re-making dishes from cartoon series as a current style that builds unlimited communities, but it was not only Asian food that was created; it was American dishes, European dishes or sometimes a new experimental one. For instance the popular donut of the notable show “The Simpson” where Homer the main loving character has enjoyed the delicious pink donut that he has shared in many of the episodes, this donut became famous and a delightful snack sold in American and worldwide stores.

Another celebrated sweet is the cookie cat ice cream from “Steven Universe”, a cookie that has snow-white icing, a beautiful layer of ice cream that melts in the mouth.

While the appetizing virtual food was appealing for some, others thought of recreating the worst dishes. The Nasty Patty burger from “SpongeBob Squarepants” was another marvelous grotesque burger that inspired people to wears the evil side into the kitchen and experiment in the mainland of Bikini Bottom.

As much as the obsession that came along with recreating dishes from the virtual world can be considered negative to some as the repercussions were seen in the deterioration of health because most dishes are mainly high with sugar and fat, yet the thought also generated in some cases a positive spin on the life of people as mother’s, for example, chose to introduce disliked vegetables to their kids by producing shapes and figures of cartoons using vegetables in order to fuel the desire of children to consume it more.